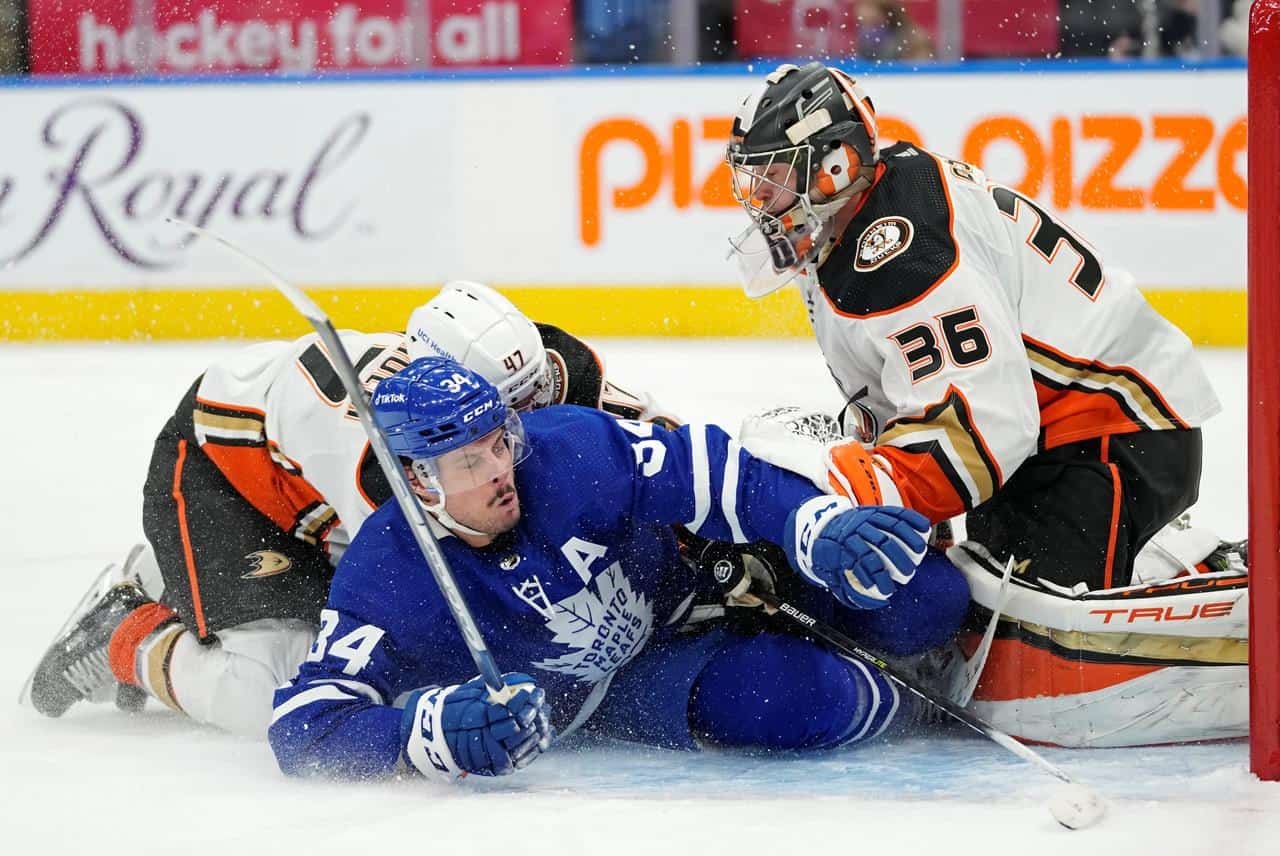 Mitch Marner, William Nylander and John Tavares each scored power-play goals to push the Toronto Maple Leafs to a two-goal lead before an empty Scotiabank Arena because of provincial COVID-19 restrictions.

But a late goal in the second period and another from Ducks forward Vinni Lettieri with 6:37 remaining in the third sent the game into overtime.

The three power-play goals gave the Maple Leafs 34 for the season. Only the Colorado Avalanche and St. Louis Blues had scored more man-advantage goals entering play Wednesday with 37 and 35, respectively.

With three days off since their last outing, a 3-1 road win against the New York Islanders, Toronto head coach Sheldon Keefe mixed up his lines against Anaheim.

He wanted a more-balanced attack with his top three units, so Keefe placed Auston Matthews, Marner and Nylander on separate lines.

Matthews centred Michael Bunting and Ondrej Kase. Marner skated alongside captain Tavares and Ilya Mikheyev. Nylander was the right side of David Kampf and Alex Kerfoot.

But Toronto’s offence clicked when all the big scorers hopped over the boards for man-advantage situations.

The Ducks arrived on a roll by opening their five-game road swing with impressive victories against the defending-champion Tampa Bay Lightning and Boston Bruins.

But the Maple Leafs had their way with Anaheim early on, outshooting the Ducks 31-11 through 40 minutes.

Anaheim did manage to snatch an early 1-0 lead with a fluky goal. Maple Leafs fourth-liner Pierre Engvall attempted to sweep away the puck from the Toronto crease, but his clearing attempt bounced off linemate Jason Spezza and into the goal.

Anaheim centre Sam Steel was given credit for the goal.

Ducks goalie John Gibson, who will be going to the NHL all-star game next week with Anaheim forward Troy Terry, kept his team in front until the Maple Leafs struck for a pair of power-play goals in the first.

Gibson made a brilliant left pad stop on Nylander, who failed to knock in a rebound off the end boards midway through the first frame.

Marner scored for the fourth straight game with a bullet one-timer from 36 feet. Nylander converted a Tavares pass from behind the net for a 2-1 lead.

The go-ahead goal was Nylander’s 17th of the season in his 39th game, matching the 17-goal output in 51 games last year.

Tavares put the Maple Leafs ahead 3-1 with a late 5-on-3 power-play goal in the second, slamming in a Marner pass.

But the Ducks stayed close because as the second penalty expired to Jakob Silfverberg, he jumped out of the box to score on a 3-on-1 rush.

This report by The Canadian Press was first published Jan. 26, 2022.