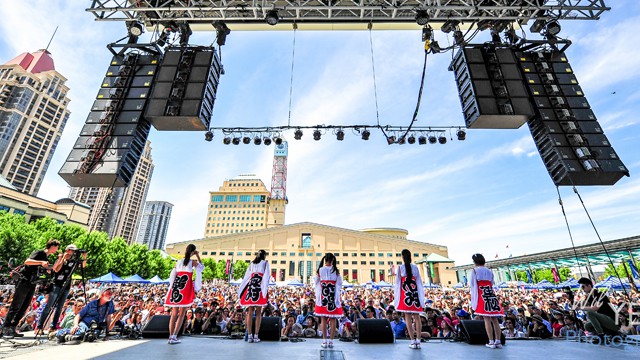 Summer is about to end on a very high note in Mississauga.

A note that includes food, a chef competition, music and some very popular J-Pop bands.

Japan Festival Canada (which was initially called Japan Day Mississauga when it first came to the city in 2016) is coming back this weekend–and it will celebrate 90 years of diplomatic relations between Canada and Japan (meaning there will be some extra special events to look forward to).

The first ever event was held to celebrate the 35th anniversary of Mississauga’s relationship with its Japanese sister city, Kariya. Now, this year’s event is honoring the establishments of their own embassies in Canada and Japan during 1928-1929.

And it’s doing so with a plethora of activities.

As far as food goes, guests can chow down on such Japanese staples as ramen, takoyaki, donburi, karaage and more.

The biggest change attendees can expect is the brand new Canada-Tokyo Chef Competition. The competition, set to run on the Saturday, will ask competitors to think up a special dish that will best commemorate the 90th anniversary.

The winner will be awarded a round trip airline ticket to Tokyo.

The inaugural event was actually the largest Japanese event ever held in Canada and was organized to introduce “Wa” or “True Japan” to Canadians. The soiree was a huge hit, possibly because it celebrated one of Japan’s greatest and most crucially important exports (food) and was run similarly to a traditional Japanese summer festival (or Matsuri). The day was absolutely packed with spectacles, including drumming, dancing, J-Pop, breakdancing, sake and traditional Japanese food.

The event is being hosted by insauga.com’s own Khaled Iwamura, and insauga.com is one of the event’s media sponsors.