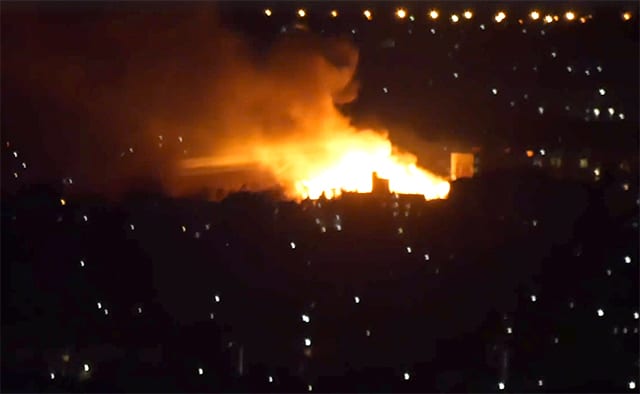 Officers and firefighters are on scene for a large fire tonight in Mississauga.

Police received a call at 7:05 p.m. regarding a fire that broke out in Streetsville in the area of Joymar Drive and Tannery Street, west of Thomas at Queen Street South.

Police note that the fire broke out in a building under construction.

There is currently no info on injuries or the cause of the fire.

UPDATE: (7:53 p.m.) Officers are assisting with evacuation. Mississauga Transit buses will be on scene to assist displaced residents.

UPDATE: (8:27 p.m.) Police are reporting power outages in the area.

UPDATE: (8:50 p.m.) Roads in the area are affected. Drivers are asked to stay off of Queen Street as far south as Eglinton unless it’s absolutely necessary.

UPDATE: (9:07 p.m.) Residents on Rutledge Road are being sheltered in place rather than being evacuated for the time being, police report.
Mississauga Fire and Emergency Services are monitoring air quality.

UPDATE: (9:30 p.m.) According to Mississauga Fire Chief Tim Beckett, the three-alarm fire broke out in a four-storey building under construction. The building was vacant and there are no reports of injuries at this time. Tannery remains closed from Queen Street to Joymar.

UPDATE: (10:30 p.m.) The fire has been contained to the four-storey building, Beckett says. Crews will remain on scene overnight. Investigators with the Ontario Fire Marshal will attend the scene in the morning to determine the cause of the fire.