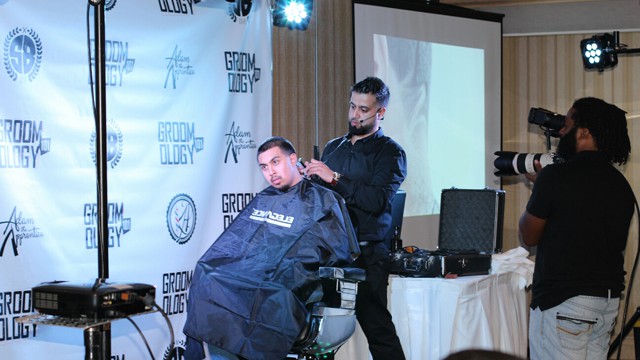 Mississauga isn’t exactly devoid of options when it comes to Halloween parties, but it’s getting something extra unique this year in the form of the Groomology Halloween-themed Barber Battle and Bash.

What is a Groomology Barber Battle and Bash, you ask?

It’s a grand-scale barber competition that will transform into a major Halloween party at the end of the night.

“It’s the first time we’re ever doing an event like this. It’s going to be the biggest barber battle in North America,” says Imran Khan, one of the event organizers and the operator of the homegrown (literally–it’s run out of his home) Khan Artist haircutting service.

Khan, who has been cutting hair for over 15 years, is capitalizing on people’s growing appreciation for the art of haircutting/styling by bringing big name professionals from all over the world to one place for an all-day competition and party.

The event, which will take place at Candles Banquet Hall (1224 Dundas St. E.), will kick off at 9:00 a.m. with a grooming workshop (which will be ideal for anyone who is interested in a career as a barber). At 2:00 p.m., the main competition will commence and the Halloween party will follow at 8:00 p.m.

In terms of talent, the educators and judges on hand will include Mr. Official, Moody, Los Cut It and more.

As for the competition, barbers and stylists will compete in the Fastest Fade, Traditional/Retro, 20 Minute Taper, Coldest Beard, Battle of the Braids, Under 21 and Creative Freestyle categories.

Although this will be the biggest Groomology event, it’s actually not the first.

“So me [and some friends] got together last year and did our Groomology 101 Watch and Learn Class,” says Khan. “We got three top barbers from Chicago and we brought them out here to teach a hands-on class. We had 120 people in attendance and it turned out great. This year, we’ve changed it and brought the same guys and other people from New York, Atlanta, L.A. and Winnipeg and they’re doing a class in the morning and the barber battle will follow.”

Right now, the battle has about 80 competitors, with people traveling in from Michigan, Connecticut, Halifax and Vancouver.

“After the barber battle, we’ll have a party and we’re giving $250 to the person with the best costume,” says Khan.

So, if you plan to attend, make sure you wear a costume!

As to why this event is being held in Mississauga (and why it’s being held now), fellow organizer Shawn Barbz, owner of Coldkutz Barbershop in Sauga, says it’s time to celebrate haircutting as an art form closer to home.

“Hair wasn’t that big for awhile, but it’s transformed over the years and men’s grooming is big. There’s a big cross between stylists and barbers now and we want to unite everyone together and create a platform or playground where we can all come together and share ideas. It’s big in the States, but it’s not as big here. We’re big on boosting the hair and barber community. We have people coming from Ireland, Dubai and all over North America.”

While this event will be a big one for Groomology organizers, they seem more excited than nervous.

“We’ve generated a lot of interest,” says Barbz. “I can’t wait, it’s gonna be a big event. We have a panel of judges, a runway, a party in the background. We’re doing his for the city. You can see where haircutting was three or four years ago, and you can see how people are so much better at it. People [in Mississauga and Canada] can show their work and what they can do. This is like how music and film are big in T.O., hair is getting big too. It’s as important as what you’re wearing when you go out. We’re bringing hair to the forefront of Toronto and Mississauga.”

As for the party element, there will be food, DJs and a cash bar.

If you’re interested in attending, there will be a $35 entrance fee. If you want to take a class, it will cost you $90.

If you want to compete, you can still register here or email [email protected]

If you just want to check out the festivities and enjoy a Halloween party, you can purchase tickets here