Women juggling child care, career, and finances during pandemic
One-third of Canadians admit to having been a victim of fraud at some point during their lives
Oakville Transit offering free rides to kids 12 and under
Migrant and undocumented workers should receive COVID-19 vaccine, advocates say
COVID-19 cases more than double in federal prisons during second wave of pandemic

It looks like almost every town and city across Canada is taking the time to honour the 15 men and boys who succumbed to their injuries following the horrific Humboldt Broncos bus crash north of Tisdale, Saskatchewan and Mississauga is no different.

Tonight (April 10), Absolute World (better known as the Marilyn Monroe towers) will continue to honour the victims by displaying green and yellow lighting. 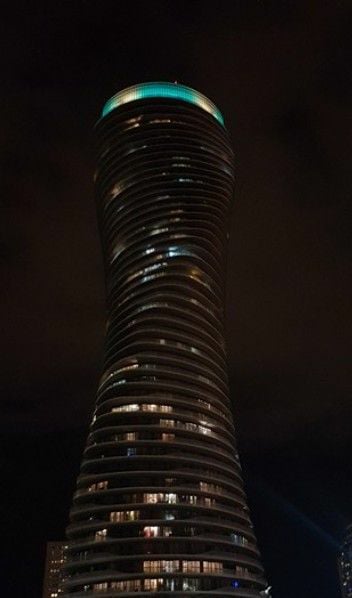 “Tonight to show our support to those affected by the Humboldt Broncos tragedy our lights have been changed to Green and Yellow,” Absolute World wrote on its official Facebook page.

The lights were also green and yellow on April 9.

At approximately 5 p.m. on April 7, a semi-trailer unit collided with a passenger bus carrying members of the hockey team on Highway #35, approximately 30 kilometres north of Tisdale.

The CBC reports that 12 other victims remain in hospital, four of which are in critical condition.

The City of Mississauga also lowered its flags to half-mast to honour the victims.

Our flags are at half-mast to honour the lives lost in the Humboldt Broncos tragedy. Our thoughts are with the Humboldt community at this difficult time.

On the day of the crash, the city decided to light the Civic Centre Clock Tower green and gold to commemorate the lives lost, adding that “Mississauga mourns with the Humboldt community.”

The Port Credit Lighthouse was also lit in green and yellow to honour the victims of the tragic crash.