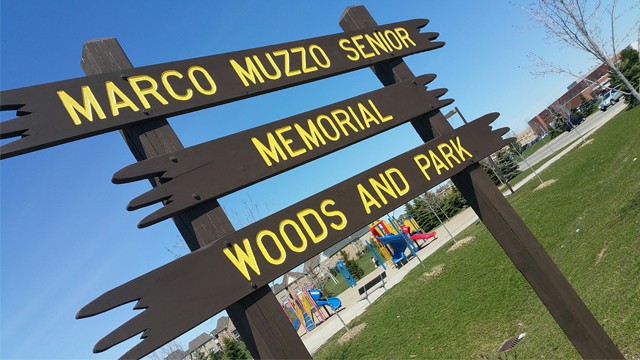 New signs have been put up displaying the name after concerns were voiced a few weeks ago that the park’s name should be changed, according to an article from the Mississauga News.

The park, located at 5098 Perennial Drive, was formally called the Marco Muzzo Memorial Woods and Park, sans the “senior”.

It was named after Marco Muzzo — a renowned developer who passed away in 2005 — for his exemplary work in developing much of Erin Mills and Churchill Meadows, as well as the many parks built and acres of parkland donated by his company.

Unfortunately, city council and residents felt the name would be wrongly associated with Muzzo’s grandson (who shares the same name) who was famously involved in an impaired driving accident last September that took the lives of four other people, three of them children. Marco pleaded guilty on February 4 and is set to serve 10 years in prison.

The city believes adding “senior” will help clarify who the park is really trying to commemorate.

The motion to change the name was brought forward by Ward 10 Councillor Sue McFadden. She told The News that residents wanted the park to be renamed to something completely different, with no mention of the Muzzo name, but she denied this request.

“I couldn’t do that to the Muzzo family,” she said in a statement to The News. “Marco Muzzo was a wonderful man who did a lot for this community. He donated that park and he would be turning in his grave if he knew what his grandson had done.”

What do you think of the new name? Would you have preferred it changed to something completely different, or not changed at all?