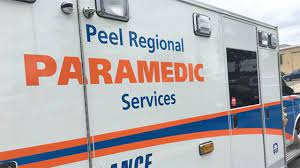 A man was struck by a car and seriously injured on Highway 403 in Mississauga on Friday (July 30).

Peel Regional Police reports there is a dangerous condition in the area of the highway off-romp on Hurontario Street. The man has been taken to a trauma centre and the police have sent media relations officers to the crash scene. Drivers are being asked to avoid the area.

The Ontario Ministry of Transportation also says that the two left lanes and high-occupancy vehicle (HOV) lane of the eastbound 403 are blocked due to a police investigation.

UPDATE: One lane has been reopened. The left lane and HOV lane remain closed.