Man Struck and Killed on 401 in Mississauga 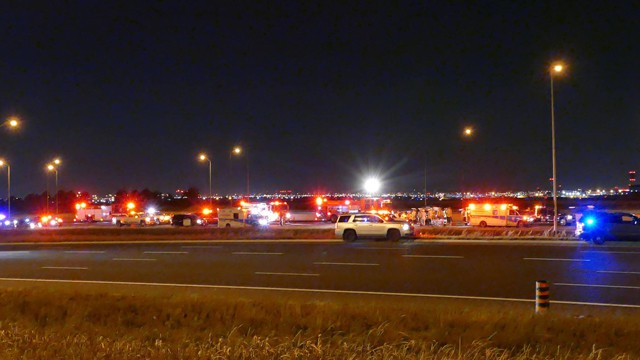 Police are pleading with people to avoid exiting their cars on highways after another pedestrian was struck and killed by a vehicle in the early hours of Saturday moning (Nov. 18).

According to OPP Sgt. Kerry Schmidt, the OPP responded to a call for a collision on the eastbound 401 near Dixie Road in Mississauga around 1:00 a.m.

Sgt. Schmidt says that, at this point, police believe there was initially a single vehicle crash with a lone male driver. It is believed he struck a pole or some part of the highway, causing minor damage to his vehicle. After the incident, the driver continued operating his car and stopped at the ramp where the express and collector lanes meet.

The driver pulled over and stopped on the shoulder–presumably to check the damage to his car–and was subsequently struck by another vehicle while possibly standing in or near live traffic lanes. He was pinned beneath the vehicle and, unfortunately, killed.

The victim is a 28-year-old man from Brampton.

The highway was closed until approximately 6:00 a.m. as a result.

Sgt. Schmidt is warning pedestrians to please be extremely careful when pulling over on highways and is advising drivers and passengers to avoid exiting their vehicles and standing anywhere near traffic, adding that although the section of the 401 where the victim was struck was well-lit, drivers never expect to encounter pedestrians on highways.

Sgt. Schmidt also added the Ontario is at an eight-year high in terms of pedestrian fatalities.

At this point, the victim’s identity has not been released and police are unsure if alcohol was a factor in the tragedy.