Man Arrested in Connection with Dispute with Syrian Refugee Family 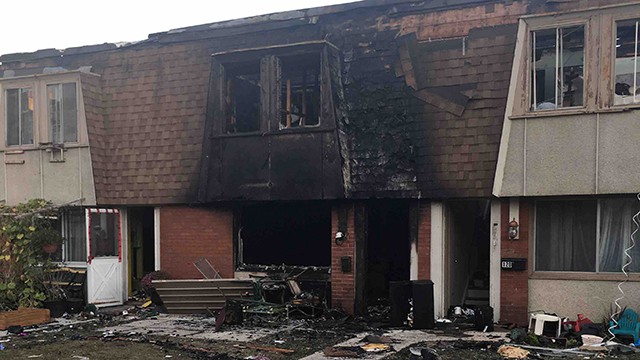 A 33-year-old Mississauga man is facing charges in connection with a dispute that allegedly took place between a resident of a townhouse complex (which caught fire later that night, although there’s no evidence the two incidents are connected) and a reportedly irate visitor who confronted the tenant over a bicycle he claimed was stolen.

Peel police Const. Bancroft Wright told inSauga.com that a call regarding the argument came in around 7:00 p.m. on Friday, Oct. 6. According to police, a resident, a refugee from Syria, was approached by the accused at his townhouse in the Dixie and Bloor area. As a result of the altercation, the man who confronted the resident has been charged with mischief over $5,000, assault with a weapon and uttering threats.

The resident, Khaled Alawad, told CP24 that the man came to his home around 5:00 p.m. and accused him of stealing a bicycle.

Alawad said he told the man that the bike belonged to him and had been acquired six months ago, but “couldn’t reason with him.” He went on to tell the news outlet that the man made disparaging remarks about Syrians and refugees and attempted to push his way into the door.

Alawad told CP24 that he reported the incident to police and that the man fled the scene before officers arrived.

The suspect has since been arrested.

Around 2:15 a.m. on Saturday, Oct. 7, fire and emergency crews were called to a massive blaze at the complex where the argument occurred. Although no serious injuries were reported in connection with the fire, it took fire crews five hours to extinguish the flames.

Two firefighters were transported to hospital with minor injuries and have since been released.

Alawad’s home, along with several other homes, were destroyed in the blaze.

Alawad has set up a Go Fund Me page to help raise $20,000 to assist the family in rebuilding their lives again.

Const. Wright told inSauga.com that an investigation into the cause of the fire is ongoing, but that there is no evidence that the Friday night confrontation is connected to the subsequent early morning fire.