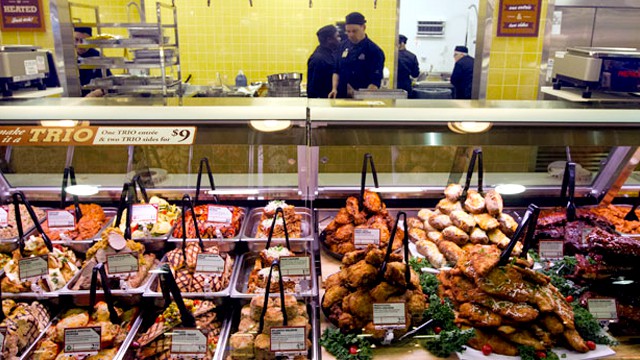 If you’ve always wanted a more diverse selection of grocery stores in the city, you might be pleased to know that popular Ottawa-based grocery brand Farm Boy has set its sights on the GTA and could — nothing is certain at this point, to be clear — set up shop in Mississauga.

A recent Canadian Press article reports that the chain is hoping to further expand operations in southern Ontario. The chain, known for its fresh produce, Farm Boy Kitchen prepared dishes, organic products and more, has been steadily growing its operation, opening locations in London, Kitchener, Whitby and Brantford over the past two years.

While none of those cities are terribly close to Sauga, Farm Boy’s chief executive, Jeff York, told CP that he has his eye on the pricy but exciting Toronto market. According to the article, the brand is working on what York refers to as the chain’s first “urban concept” store. The urban store, which is set to open in Ottawa later this summer, will offer more fresh prepared foods and improved in-store dining options. If the concept works well, it could make its way to Toronto.

“We’ll make our mistakes in Ottawa, and once we can hone the model, we can go into Toronto and maybe pay a buck or two more in rent,” he told the news outlet.

The brand is about to open a store in Pickering, so it is indeed creeping into our neck of the woods.

So while the news is good for consumers hoping to further diversify their grocery shopping experience, other experts say the brand has a tough — but traversable — road ahead.

Ian Lee, who teaches strategy at Carleton University’s Sprott School of Business, told the news outlet that the brand would face stiff competition (among other challenges) in the GTA. Still, he’s optimistic Farm Boy can make it work.

“As long as Farm Boy does a controlled, slow, incremental expansion, so that they learn from each area that they’re going into, whether it is Pickering or Mississauga or Toronto or whatever, they should be OK,” he said.