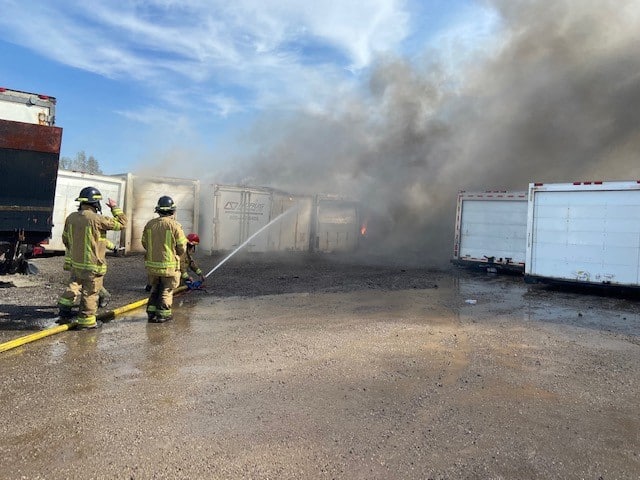 At least eight fire vehicles are on the scene of a major industrial fire on Squires Beach Road in south Pickering.

Crews were called to the trailer storage facility just before three Tuesday afternoon to find seven storage tanks spewing black smoke into the air that could be seen for miles. There is also a grass fire at the scene.

Reports say a cub van caught fire and the blaze spread to nearby storage tanks, which then ignited the grass fire.

There are no reports of injuries at this time and fire crews continue to fight the blaze. The fire is between Bayly Street and Highway 401.

Drivers are being asked to avoid the area.

UPDATE: Chopper 680 is now over the scene. Fire crews are battling this fire at a trailer storage facility on Squires Beach Road near the 401 & Brock Road in #Pickering. Several trailers on fire. Listen live for updates https://t.co/oCM3n4tp4O pic.twitter.com/6hJWRDmJUC