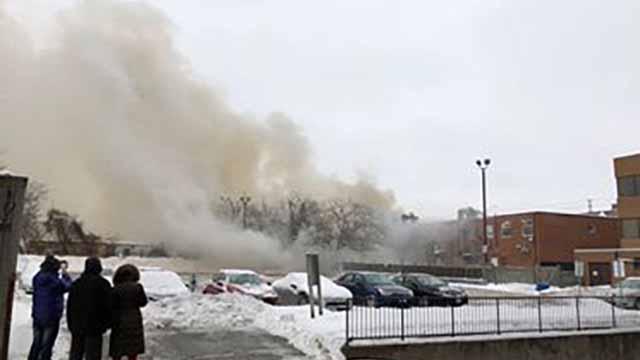 After an explosion ripped through a commercial building in Mississauga, part of Hurontario will remain closed until further notice. Police have also provided some updates on injuries and displaced families in connection to the incident.

On Sunday February 11, 2018, Peel police say they were called to the scene of an explosion in a commercial area in the Hurontario St. and Agnes St. area around 7:28 a.m. Police say that Hurontario Street will be closed in both directions at Dundas to Hillcrest “until further notice.”

A 50-year-old man and a young child were treated on scene and released.

“A number of families have been displaced from the area of the explosion and it is uncertain when they will be allowed back into their homes,” said police in a recent statement. “To assist these families, Region of Peel Human Services is currently leading a coordinated response with the Red Cross at the evacuation centre at Mississauga Valley Community Centre.”

Anyone with information regarding this incident is asked to contact investigators at 12 Division Criminal Investigation Bureau at (905) 453-2121, ext. 1233. Information may also be left anonymously by calling Peel Crime Stoppers at 1-800-222-TIPS (8477), or by visiting Peel Crime Stoppers online or by sending a text message to CRIMES (274637) with the word ‘PEEL’ and then your tip.

Photo courtesy of Shqipe A. Shkodra