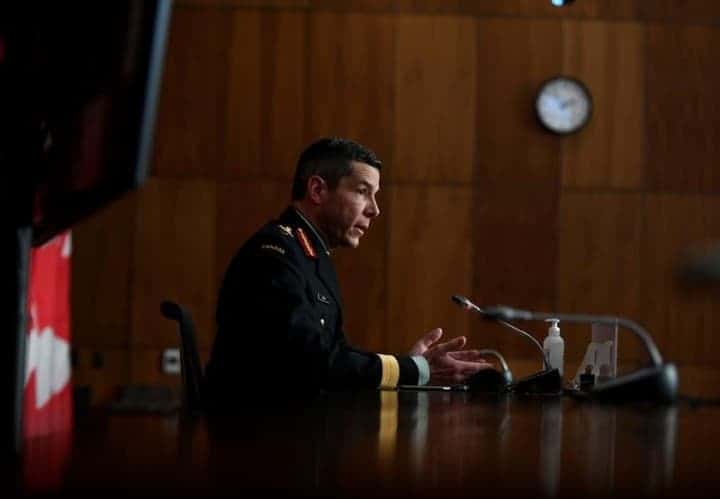 The officer in charge of Canada’s vaccine rollout has left his assignment with the Public Health Agency of Canada pending the results of a military investigation.

The Department of National Defence announced in a news release Friday evening that Maj.-Gen. Dany Fortin is off the high-profile job.

There was no information released about the nature of the investigation.

The release says acting chief of the defence staff, Lt.-Gen. Wayne Eyre, will be reviewing next steps with Fortin.

“As I have stated previously, I am committed to working to build a true culture of inclusion for the Canadian Armed Forces and the Department of National Defence, where everyone is treated with dignity and respect,” he said in an email.

“We are committed to this lasting change — one that sheds toxic and outdated values, practices, and policies.

“The Acting Chief of Defence Staff has advised me that MGen Fortin has stepped aside. As there is an ongoing investigation, I will have no further comment at this time.”

Sajjan said the Canadian Armed Forces continues to fully support the vaccine rollout and the rest of the government’s response to COVID-19 across Canada.

The Public Health Agency of Canada and Health Minister Patty Hajdu’s office refused to comment on the impact of Fortin’s departure on the vaccine campaign. They referred all questions to the Department of National Defence.

Last November, Fortin was appointed by Prime Minister Justin Trudeau to oversee what he called the “greatest mobilization effort Canada has seen since the Second World War.”

Fortin has served in the military for almost 30 years. He commanded NATO’s training mission in Iraq and led Canadian soldiers in Afghanistan at the height of the fiercest fighting there.

It’s the latest blow for the military, which is currently dealing with the fallout from a sexual impropriety allegation levelled against the former chief of defence staff, retired general Jonathan Vance.

Military police are investigating allegations that Vance had a sexual relationship with an officer under his command and that he sent an off-colour email to a junior offer in 2012, before taking the military’s top job.

Vance has not responded to requests for comment, but Global News, which first reported the allegations, says that he has denied any inappropriate conduct.

Shortly after reports of the Vance allegations, his replacement as chief of the defence staff, Admiral Art McDonald, stepped aside due to an unspecified allegation of misconduct. He, too, is now under military police investigation.

And another top commander, Vice-Admiral Haydn Edmundson, is also being investigated by the Canadian Forces National Investigation Service.

Maj.-Gen. Steve Whelan officially took over on Wednesday as the new officer responsible for human resources in the military, the position that Edmundson held before he was put on leave pending the results of the investigation.

Brian Greenspan, a lawyer for Edmundson, said Friday his client denies the allegations.

“It is regrettable that after 37 years of loyal service to Canada, Vice-Admiral Edmundson has been replaced in his role without an opportunity to appropriately respond and defend against untested allegations which he categorically and unequivocally denies,” Greenspan said in a statement.

Greenspan added that Edmundson wishes Whelan and his team “best wishes for success in their future endeavours and expresses his appreciation for their dedicated service to our country.”

There is nothing in Friday’s news release that suggests the investigation against Fortin deals with sexual allegations.