A high-end vehicle exploded in a ball of flames in Oshawa Friday evening right in front of the former police headquarters on Centre Street.

Police have not confirmed whether it was a molotov cocktail – as has been rumoured on social media – that caused the explosion but they have confirmed that witnesses saw a man throw an incendiary device into the parked car shortly before it exploded.

A man seen running from the fire was caught by police after a short foot-pursuit and held for a bail hearing.

Police say there were no injuries and no additional damage to surrounding buildings or vehicles.

The Explosive Disposal Unit was called in to clear the area and police do not believe there are any other suspects or concern for community safety.

The car is reported to be a Maserati Gran Turismo convertible. It was completely gutted by the fire. 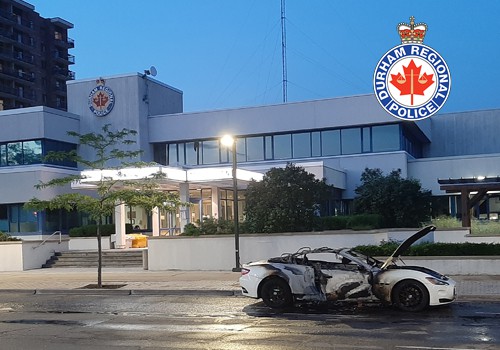 Car just blew up in Oshawa. I hope no one was in the car. Firefighters just put it out. pic.twitter.com/AZt7C72WNf

Anyone with information about this incident is asked to contact Det. Dellipizzi of the Central East Division Criminal Investigations Bureau at 1-888-579-1520 ext. 2766

Anonymous information can be sent to Durham Regional Crime Stoppers at 1-800-222-TIPS (8477) or visit their website. Tipsters may be eligible for a $2,000 cash reward.

With files from Samantha Lawson