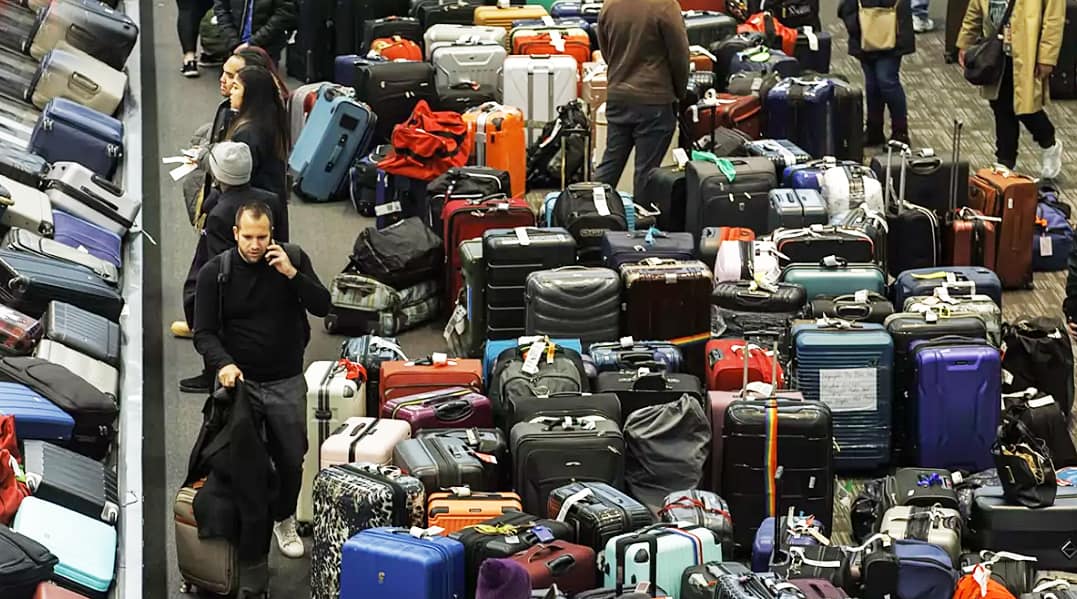 Luggage is stockpiled at Pearson Airport in Mississauga. Cole Burston /The Canadian Press

Travellers, already facing flight delays and cancellations, are now dealing with another problem at Pearson Airport in Mississauga…the loss of luggage.

Those both departing and arriving at the airport say a sea of suitcases can be seen throughout Pearson as a problem in the baggage handling system struggles to catch up with delivering all the luggage that needed to be processed during the Christmas rush of passengers.

I’ve never seen anything like this at Pearson Airport in Toronto.

A mass of humanity and luggage upon arrival. pic.twitter.com/VfOOYxSoWA

“This is incredible,” Marion Rosseti on social media. “Everywhere you look you see suitcases. It’s pretty comical but not for those who are frantically searching for their luggage.”

The situation unfolded on the weekend as a swarm of travellers went through Pearson. Because of the backlog, luggage has been left in organized groupings in the baggage claim areas as both airport officials and passengers try to sort through the mess.

In some cases, the luggage belongs to those who have already arrived at international destinations only to find their clothes and sundries did travel with them. In other cases, the bags are the stockpile of those that went through the processing delays and are now waiting for people who have arrived at Pearson during the past few days to claim them.

A spokesperson from the Greater Toronto Airports Authority (GTAA) said it is working with the various airlines to make sure the luggage gets shipped out to those waiting at mostly sunny foreign destinations while assisting people trying to locate their belongings here. The GTAA says the problem was caused by frozen equipment and weather-related flight disruptions.

Pearson airport is having a flea market! pic.twitter.com/ihmIHiBAuf

The GTAA says the baggage handling system is now fully operational and that new luggage arrivals should be processed efficiently while the backlog is sorted out.

The baggage issues come as the airport deals with flight delays and cancellations caused by winter weather problems throughout North America where snow has stranded thousands of passengers.

Travellers through Pearson have experienced flight and baggage problems at several times during 2022 hitting a peak in the summer months when people flocked to take flights after months of staying home during the pandemic. The delays then were caused then due to staffing shortages.