The screening takes place at DRIFF’s drive-in headquarters at the Town of Whitby Municipal Building (575 Rossland Rd. E.) on Thursday, August 18 at dusk.

The world premiere of the short film Heap will open the evening, with Marchen and Wickiam’s project winning DRIFF’s first Emerging Filmmaker Incubator prize of $30,000 and the opportunity to be screened at the DRIFF drive-in. The film explores issues of social hierarchy, the lack of affordable housing and mental health, with a creative stylistic approach that combines a super 16mm film look with a harder edged digital video image to contrast two levels of reality which seem increasingly incompatible.

“We have a crew that are really some of the most talented people I know,” says Marchen in a behind the scenes video produced by DRIFF. “Our cast nails it, especially our leads, and they’ve done such a good job, for me as the director, making this painless so many times. A lot of the things you mentally prepare for we’ve been able to execute at a really high level because of that talent.”

DRIFF will close the summer drive-in series with Andrew Cividino’s award winning feature film Sleeping Giant. It’s the story of three teenagers who spend their summer vacation on the rugged shores of Lake Superior and pass their ample free time with debauchery and reckless cliff jumping. The revelation of a hurtful secret triggers a series of irreversible events that test the bonds of friendship and change the boys forever.

This is Cividino’s feature film debut. He is best known for his directing on the popular Canadian television series Schitt’s Creek, for which he was awarded an Emmy award for achievement in direction alongside co-director Dan Levy.

To learn more about this screening and to watch the trailer visit driff.ca/sleeping-giant. Tickets to the event are $20 per vehicle – good for as many people as there are seatbelts – and can be purchased at https://www.seatgiantevents.ca/event/driff-shifting-the-narrative

Watch the full behind the scenes video from the set of the film Heap by visiting driff.ca/directors-chat. 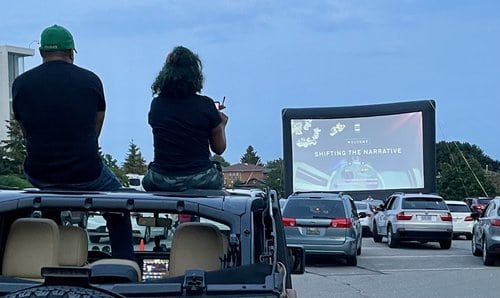