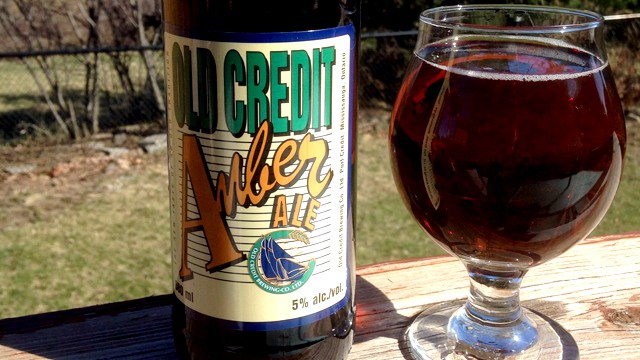 If you haven’t yet noticed from my Instagram @rchiasson80, I consider myself a bit of a beer snob. Mass produced swill by large conglomerate beer companies just doesn’t do it for me. I need something smoother, something produced in small batches by caring individuals that base their craft on old world customs and not massive factories by the airport. And guess what? Mississauga is lucky enough to have a craft brewery in Port Credit by the name of the Old Credit Brewing Company.

As a certified at home beer taster, I have tried many beers in my lifetime and I have to say that my preferences are very hoppy/bitter American IPA’s. By their own admission, you will not find anything like that here. However, sometimes you need a clean, light and crisp beer with no preservatives to suit your fancy and that is where the good folks at Old Credit shine.

One lovely spring day I decided to sample their ever popular amber ale. While chugging this lovely amber ale with hints of caramel and toffee straight from the bottle in direct sunlight is not considered the ideal way to get the most out of this beverage in regards to aroma and body, it certainly did taste delicious!

Old Credit only produces three types of beer: pale Pilsner, a holiday honey beer and, my personal favourite, an amber ale.  While the mass producers of beer spend their time trying to please the masses with artificial lime flavour or something called a “Strawberrita,” Old Credit Brewing focuses on doing one thing and that is make great, refreshing beer locally from all natural ingredients.  “While most mainstream beers are ready for bottling in just one week, Old Credit takes 10 weeks to fully mature,” they say and it’s a testament to the care and hard work that go into the beer at Old Credit.

Now, typically my summers are spent showing off in Snug Harbour on my 75 ft. custom yacht with the “who’s who” of the western GTA.  If you don’t see me on the deck eating jumbo shrimp cocktails with Mike Holmes, you can catch me cooling out on the helipad with a cold Old Credit Amber Ale — because that’s what we all should do. Support small local businesses that are producing products that are better than the big guys. While you may pay a tiny bit extra (although in the case of Old credit, their price is actually on par with the big guys)  it’s worth it in the end because the quality is better and you are supporting the little guy.