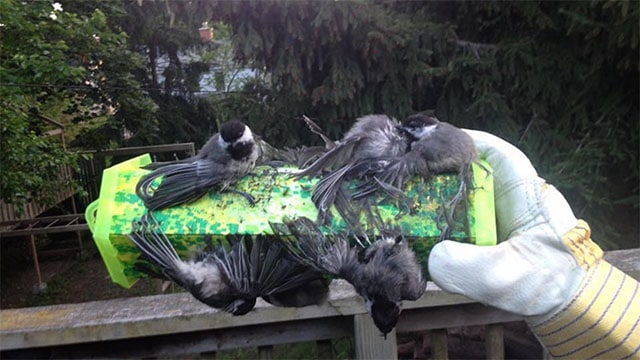 Some people who purchased a wasp trap available at major retail outlets were horrified to discover that the trap kills more than just irritating insects.

Recently, a Twitter user who goes by the handle @PFTrudel shared disturbing photos of a TrapStik wasp trap covered with the bodies of small birds. In the tweet, she asked people to raise awareness of the dangers of the product and to encourage retailers to take it off the market.

Loblaws, which carried the product, said that it’s pulling the trap off of shelves. A Loblaws spokesperson also said that customers who own the trap are free to return it to the store for a refund.

“This is the first we have heard of the concerns with the product. While we are aware that other Canadian retailers carry this item, we have made the proactive decision to remove the product from our shelves,” Tammy Smitham, Vice President, External Communication, Loblaw Companies Ltd., said in an email statement. “We are working on issuing this notification to our stores and will be able to accept any returns with a receipt for a full refund.”

The TrapStik, which is also available at Home Depot, Home Hardware Walmart and Lowes, catches wasps by using appealing colours and patterns. According to an Amazon.com listing for the product, wasps get stuck to the surface and eventually die.

Although the product is reportedly environmentally friendly in the sense that it refrains from using poisons or killing agents, it appears it traps and kills unintended victims.

On the Amazon review page, distraught consumers complain about the product cruelly killing other animals (in one review, a customer says she was “extremely upset” after being unable to help a mother and baby bat who suffered and eventually perished after becoming stuck to the product). Others shared stories of having to painfully remove baby birds from the Stik (some of whom they believe eventually died due to excess “goo” on their beaks and wings).

Although wasps are pests, it’s well-known that glue/sticky traps are notoriously cruel (they’re sometimes used to trap rodents and can inflect unnecessary suffering when the animal either starves to death or injures itself attempting to escape).

If you’re a bird lover and worry this trap will kill or injure innocent victims, it might be best to either store the trap somewhere where birds and bats are unlikely to access it or seek out a different wasp control method.