Living at Home After 25 in Mississauga

The current Canadian (and perhaps western in general) coming of age story for young adults is different from the one most often lived and told in bygone eras.

In previous decades, there existed a notion that one could be almost totally and completely independent of his or her parents by the age of 20. And at the time, that idea wasn’t foreign or weird.

But times have changed.

Over the same period, the share of all young adults living with their own family (meaning a family they’ve created themselves through childbearing) decreased from about one-half, or 49.1 per cent, in 2001 to 41.9 per cent  in 2016.

In fact, Stats Canada says that more than two in five (42.1 per cent) young adults in Ontario were living with their parents in 2016, by far the largest share observed in the provinces and territories. This proportion has increased by 20.3 per cent since 2001.

Since few people like being told how to govern their personal lives (and typically hate being afraid to bring a date or new partner home for fear of upsetting their parents or provoking unwanted questions), this new trend begs the question: Why are so many adults living with their parents well into their 20s and even 30s?

The answer is both simple and complex. For many people, remaining at home until marriage is culturally customary (even NDP leader Jagmeet Singh lived with his parents and adult brother in Meadowvale prior to his wedding), and people are marrying later in life.

In fact, 2011 census data finds that the average age for a first marriage is 28 for women and 31 for men. The same data shows that among people in their early 30s, 43.4 per cent of women and 54 per cent of men have never been married.

In 1981, only 15 per cent of men and 10 per cent of women in that age bracket had never been married by the time they reached their fourth decade of life.

But while we know that people are marrying later in life—often after completing anywhere from two to four (often more) years of postsecondary schooling and establishing careers, we also know that one of the main reasons people have trouble leaving home is financial hardship.

More specifically, housing is more costly than ever before.

“Number one is the economy,” says 28-year-old Mississauga resident Monika M*. “Looking at the cost of living, it’s very expensive. I have a great job, I’ve actually got three jobs, but it’s nearly impossible to manage the bills while having to live on your own.”

Monika also says that high schools have a responsibility to teach financial literacy so that people don’t experience sticker shock when they realize how much a home really costs—something she says they’ve been remiss in doing.

“High school didn’t prepare me, it didn’t say ‘these are the kind of bills you’ll be paying.’ They don’t say what a mortgage is, what a credit card bill is.”

While financial literacy is important, knowledge of basic fundamentals still might not prepare young people for the red-hot GTA housing market—a market where renting is not, in some cases, cheaper than buying (at least on a month-to-month basis).

Figures recently released by the Toronto Real Estate Board (TREB) indicate that even though housing isn’t as costly as it was in winter 2017, it’s still profoundly expensive—and prices are climbing month-over-month.

Renters don’t have it any easier.

“It’s a mix of everything, not being able to afford housing or even rent,” says Monika, adding that as an only child, it will also be hard on her mother when she leaves home.

“What am I going to eat? Where will I get money for this? A mortgage and all of this is terrifying. I’ve looked for places to live. I always said I’d never leave the GTA, but even Hamilton and Waterdown seemed impossible.”

Monika says that even though her boyfriend has a great job as a construction worker and still lives at home, they can’t afford anything together.

“We don’t want to rent, to put money towards rent is throwing it in the air. Even buying pre-construction won’t work for us. Who can come up with $50,000 in 90 days? Things happen. I’ve had car accidents and family emergencies.”

The high cost of living—and the ability to save more while living at home—also keeps some people from moving out.

“I am 32 in June and still live with my parents,” says GTA resident Sarah.*

“People always hammered into my head that renting is bad, bad, bad and now I am stuck. Prices have just skyrocketed.”

Sarah says she’s been house hunting for awhile, but thinks even the most affordable real estate is currently overvalued.

“I would say I started looking about three years ago with no luck. I’ve been working and saving since I was 24 or 25 and yet I just cannot bring myself to buy a 700 sq. ft. condo for half a million dollars. Not that I cannot afford it but it just does not make sense to me for that tiny little space. Not to mention the maintenance fees on top of that.”

The idea of renting also isn’t appealing to her.

“And now, even rent has gone up so much. It is a lose lose situation. I don’t mind living with my parents because I contribute and do whatever I want but it is getting old and I would rent but only to a certain point. Or I could just move to the country, but find me a job there,” she says, laughing.

For many people, lacklustre wages (which have not kept up with the cost of living), make moving out almost impossible.

“Personally I’ve been trying to move out for over two years but because of the crazy rent prices in Mississauga now, it’s almost making it impossible for me,” says Mississauga resident Cris*.

“I make only $15 an hour and hardly make ends meet and that makes living on my own very difficult. Only making $2,000 a month after taxes, basically more than half my income would go to rent for a basic one bedroom. Not even considering the other basic costs of living on your own.”

Cris says home ownership isn’t even a consideration at this point.

“Thing is I’m actually just married but finances and problems with work made it difficult for me to land something stable and permanent that would allow me to move out. I am just trying to rent for now. Maybe down the line I’ll maybe look for a house but for now I’m just interested in renting,” she says.

“I feel quite uneasy about the future for renters in Mississauga. Young people are unable to go out and start their lives and it’s kind of sad to think about that. It’s like you gotta be making at least $5000 a month in order to even survive. I hope to find something decent in which I can live very soon. Still on that search.”

For other people, familiar obligations and financial issues make staying at home a better option.

“I’m a 33 year-old-female that still lives at home with her parents in Malton,” says Daniela (who asked that we not use her surname).

“I work full time for the Region of Peel and make a pretty good living, my boyfriend is 37 and still lives at home in Port Credit and works as a plumber. Two reasons [we haven’t moved out yet] are the prices of houses are crazy and both my boyfriend’s and my parents are aging baby boomers, as well my mom fights with depression so I help lift the vibe in the house.”

Caregiving is another reason why some young adults might choose to linger longer in the family home.

While census data does not track why young people choose to stay in the “nest,” it does say that many people care for aging or ill parents.

Stats Can says the 2012 GSS on Caregiving and Care Receiving identifies a caregiver as a person who, over the past 12 months, has spent time and resources helping someone (family or friends) with a long-term health condition, a physical or mental disability, or problems related to aging.

“At the time of the survey (2012), nine per cent of all young adults between the ages of 20 and 34 who were usually living with their parent(s) were the primary caregiver for one or both parents,” the report reads.

It’s also important to note that while some people are choosing to live away from the family home, they’re not always carrying the financial load alone—particularly if they’re not yet living with/raising their own family.

Census data finds there was also an increase in the proportion of young adults who had other living arrangements (without their parents or their own family) over the period from 2001 to 2016, up from 20.3 per cent to 23.4 per cent. This group includes those living alone, with other relatives, or with roommates. 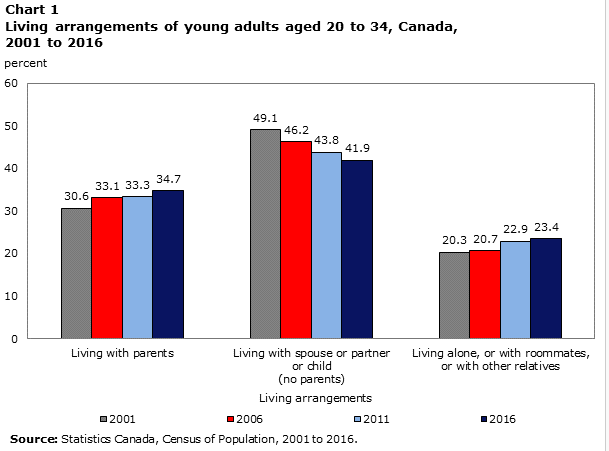 But while there might still be some stigma attached to staying in the parental home for longer than previous generations, some wouldn’t have it any other way.

“I totally think ‘five years from now, where will I be?’ I feel like moving out will happen when the time is right. If the market drops, I’ll jump on whatever I can get. I won’t move out just because I’m 30 or 31. My career and relationship have a five-year plan, when it comes to moving out, it’s when we feel comfortable financially,” says Monika.

“Even with a child, I wouldn’t want to bring one into the world without being able to look after them. If we were to buy a condo next week, what furniture would I have? Do I take the bed from my parent’s house? You need furniture, you need utensils. Your parents house has all those things already in there. I have friends who rushed into it and fell into debt and ended up moving back home.”

And at the end of the day, it’s becoming more and more “normal” to stay home for longer.

“The entire group of 10 of my closest friends, we all live at home,” says Monika.

“One friend lives with her in-laws, her boyfriend and their children. You have two kids and you’re sleeping in a basement. One friend moved out, but she lives in Ottawa, where the cost of homes is different. A three-bedroom home was $500,000.”

At a time when nearly one in two (47.4 per cent) of adults between 20 and 34 live with their parents in Toronto (where it’s safe to say the cost of living is largely a factor in that decision), it looks like more people will be staying in the family home for even longer.

Houses probably won’t be getting cheaper any time soon, so it’s tempting to declare this trend a new normal.

Are you happy living with your parents in Mississauga?

Popular fried chicken joint planning to open new location in Mississauga
If you love chicken and waffles, you might be excited to hear that a popular chain with locations in Toronto is heading to Mississauga in the not-too-distant future.
END_OF_DOCUMENT_TOKEN_TO_BE_REPLACED