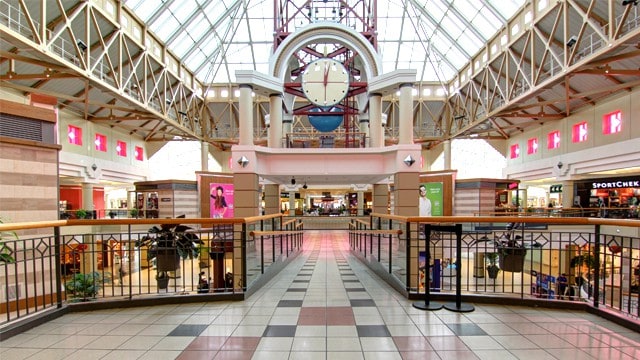 A Luxury Workout
In early March, as I was getting off the 403 at Winston Churchill Blvd., I saw something that I hadn’t seen before. The formerly barren parking lot surrounding the brand new Lifetime Athletic complex — a building that had been under construction for over a year — was packed with cars. When I turned right onto my street, a police officer was directing traffic down a back road, and cars were parked up and down the usually quiet road.

Lifetime had opened with, it appeared, great fanfare.

Prior to the grand March 9 opening, I’d heard a lot of rumours about the super-gym. Some said membership was going to cost over $200 a month (it doesn’t) and others said it would have a full fake beach (it does). One excited neighbor said the rock climbing area — a three-wall structure with varying levels of difficulty — was the biggest in the province (also true).

A few weeks later, I decided to tour the facility myself.

First, to answer some potential burning questions, I’ll include a list of what the gym does have:

While there are several Lifetime locations in the U.S., the Mississauga facility is the brand’s first facility in Canada. Membership (which membership is capped) costs about $135 a month after taxes, and new members will receive a $100 credit that can go towards Group Fitness, Group Weight Loss, swimming or rock climbing classes. Members have access to all three-floors, and can use the pools, massive change rooms, extensive exercise equipment (including near-futuristic cardio and weight machines), basketball and squash courts and fitness classes any time. The spa and restaurant cost extra, but can be charged to a user’s membership card to be paid at a later date.

What’s most impressive about the $50 million facility, however, is how unafraid it is to declare, through its five-star hotel-like appearance, that it’s not your average health club. When you walk into the grand foyer, you don’t see concrete floors and sweaty patrons lugging towels and gym bags. You see a wall-mounted LCD TV surrounded by homey leather furniture set atop a warm Persian carpet. The front desk is made of granite, and the employees dress more like concierges with their black pants and crisp white dress shirts than gym bunnies with Lululemon pants and ribbed white tank tops (not that there’s anything wrong with Lululemon pants or ribbed tanks).

As one employee proudly declared when I first walked in, Lifetime isn’t intended to be a gym — it’s meant to be an “experience.”

As far as diverse functionality goes, the facility also offers summer camps, birthday parties, a Parent’s Night Out program, and a diverse range of certified health professionals to counsel members on everything from fitness to nutrition. Out of town or casual users can purchase 60-day passes if they just want to enjoy the occasional swim or a weekend rock climb.

So, while the gym is pretty impressive, some intrigued fitness aficionados might still be wondering if it’s worth the hit to the wallet. After all – smaller gyms can provide the requisite treadmills and ellipticals for under $100 a month. If a treadmill is all you need, it might be worth it to keep your membership with your local gym. If you want a wide range of classes held throughout the day, sporting areas, kid-friendly activities and on-site dining, however, Lifetime is an option.

The gym offers no contract, pay-as-you-go memberships that you can opt out of any time.

To learn more or book a tour, visit: www.lifetimefitness.com