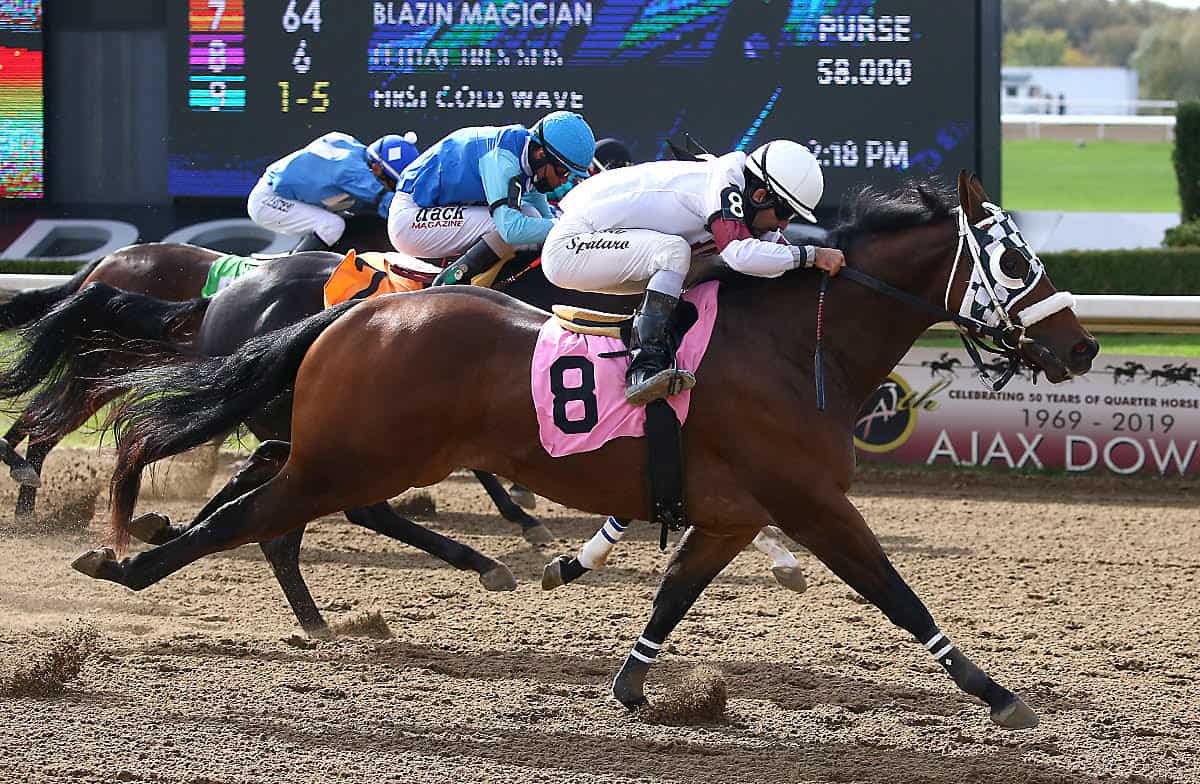 Six-to-one underdog Lethal Tres Seis won his second race in his second-ever start and SW The Redeemer won in his Ajax debut to highlight the Time Trials Wednesday for the October 27 $100,000 Picov Memorial Futurity, the richest race of the Ajax Downs season.

The two Trials, open to two year-olds, set up an exciting finish in three weeks time.

SW The Redeemer, owned by Milena Kwiecien of Burlington and trained by Jason Pascoe of Pontypool, broke quickest in the first 400-yard Trial and raced to a 1 1/4 length victory under jockey Ricardo Moreno, stopping the teletimer in 20.288 for an 89-speed index.

The brown gelding’s time, assisted b a 11-mph tail wind, was marginally quicker than the clocking of the second Trial won by Richard Wincikaby’s Lethal Tres Seis, who won by half a length in 20.306.

Sw The Redeemer was a close second in the Minnesota Quarter Horse Racing Association Futurity at Canterbury Downs on July 6 before winning his maiden at that track on August 11.

He was the even-money favourite against seven rivals and held off stablemate Eye Live for Candy, who had a troubled start. The top two finishers in the first Trial were the only ones to advance to the final from that race.

Lethal Tres Seis, an impressive winner of his career debut at the Ajax racetrack on September 1, posted an upset in the second Trial under jockey Cory Spataro.  Trained by Michelle Woodley, Lethal Tres Seis was 6 to 1 and held off 64 to 1 shot Blazin Magician, also owned by Kwiecien, and 2 to 5 favourite First Cold Wave, who had a stumbling beginning.

Lethal Tres Seis, an Oklahoma-bred, earned an 89-speed index. Eight of the nine juveniles in the second Trial advanced to the final.

Kwiecien, Ajax Downs’ leading owner this season, owns five of the finalists while the meeting’s leading trainer, Pascoe, will saddle six for the final.

Wednesday’s co-feature was the third and final leg of the $20,220 Quarter Racing Owners of Ontario Distance Series, which was won by Spy for the Senate in near track record time.

The rest of the field for the 400-yard Futurity on October 27 include Keepr of the Stars, Magic Flare, Night Leader, Rapter, Vanek and SW Snowmagicallykool.