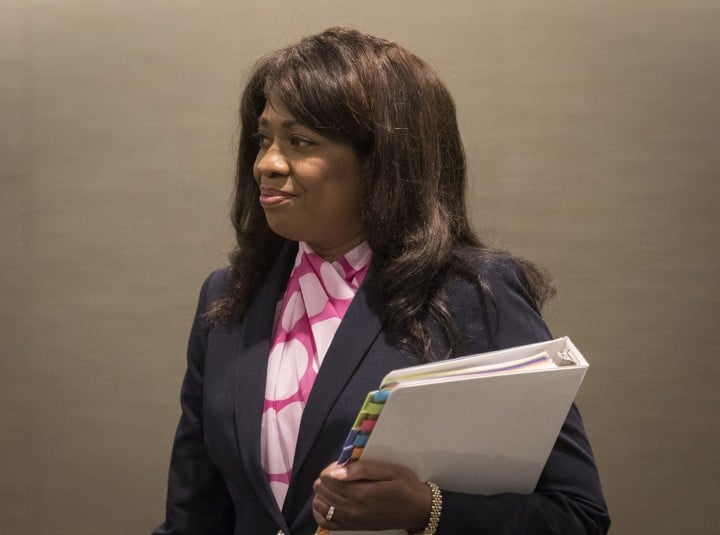 Leslyn Lewis, who finished in a strong third place in the Conservative leadership race after starting off an unknown, will run for the party in the next election.

Lewis spoke Tuesday with new Conservative Leader Erin O’Toole and pledged her support and efforts to help him on his path to forming government.

“She is 100 per cent committed to running and helping build the party and grow the party,” said Steve Outhouse, her campaign manager.

Lewis, 49, made history in the race as the first Black woman to run for the Conservative leadership.

She entered the campaign with the support of social conservatives, whose causes she promised to champion.

But she broadened her base throughout the race, and saw steady increases in donors and dollars, finishing with nearly $2 million in the bank.

Party insiders on rival campaigns pinpointed several key places along the way where she got a boost, among them when O’Toole opened the door to carbon pollution pricing on industry.

Though Peter MacKay would attack him mercilessly on that, calling it a carbon tax — which O’Toole insisted it wasn’t — it drove support among western party members to Lewis’s camp, not MacKay’s.

On the second ballot, she won the popular vote and beat both MacKay and O’Toole in the four western provinces.

While that ultimately wasn’t enough to get her across the finish line, hers is not a voice that can be dismissed, Alberta Premier Jason Kenney said Tuesday.

“She won overwhelmingly the support of rural Albertans and people across the rural Prairies,” he said during a news conference in Edmonton when asked about his thoughts on the race.

“I think that sends a very important message about how this truly is a country characterized by equality of opportunity and about how the conservative movement embraces people of diverse backgrounds.”

Kenney said he had been among those who initially recruited Lewis to run for the party at the last minute in the 2015 general election.

The party’s candidate in the Scarborough-Rouge River riding was turfed after old video of him urinating into a cup in a person’s house surfaced, and Lewis came in to replace him.

Lewis didn’t win and has said she sat out the next federal election in 2019 to focus on her ongoing education.

Which riding she’ll run in next time is yet to be determined.

There are a number of solid Tory ridings expected to be vacant come the next election, if not sooner.

MacKay, who finished second in the race, had been casting around for a seat to enter the House of Commons in a potential by-election if he’d won the leadership.

He was also expected to speak with O’Toole on Tuesday.

Fourth-place finisher Derek Sloan, who is an MP for the Ontario riding of Hastings-Lennox and Addington, said he does intend to run again for the party.

“I just want you guys to know I’m not going anywhere,” he said in a video message to supporters posted on social media.

“This is the start of a great, great movement and we will focus on Justin Trudeau and we will go into the next election strong.”