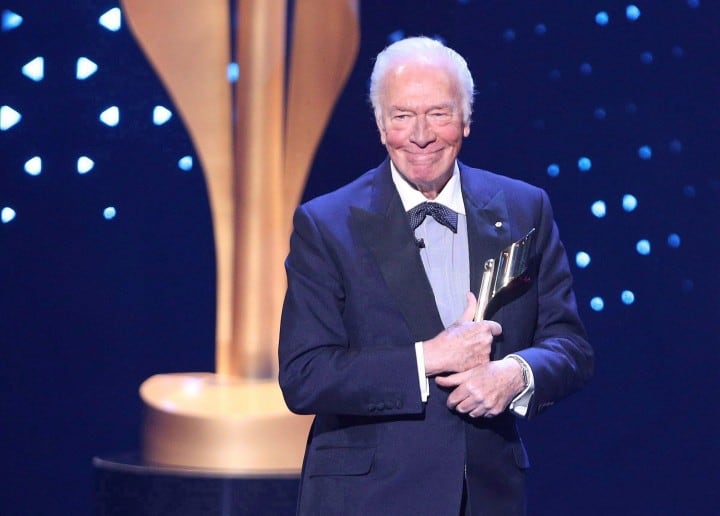 TORONTO — Christopher Plummer, the Oscar-winning acting legend whose storied career encompassed stage, television and film, and who was perhaps best-known for portraying Capt. Georg von Trapp in “The Sound of Music,” has died.

Plummer died “quite peacefully” at his home in Connecticut Friday morning after suffering a fall two and a half weeks ago, said his wife, English actress Elaine Plummer. He was 91.

“It’s so sad but he had a great life,” she told The Canadian Press by phone. “He had a fall, unfortunately. He hit his head against my car and he was taken to the hospital. They repaired the leaks and he came home, but it was a really horrible accident.”

“He fought the good fight,” she added. “But eventually I think he thought … ‘Exit stage right.’”

The star was supposed to start working on a “King Lear” film with Ontario-raised director Des McAnuff, she said.

Recently he starred in the Toronto-shot television series “Departure,” which began production on its second season last fall, with Plummer shooting scenes from his home, taking COVID-19 precautions.

Gordon Pinsent, a veteran Canadian actor of the same generation, said Plummer’s “likability” was unflagging, as was his drive to continue performing into his twilight years.

“It must have seemed very much like a game at this stage in his life to continue adding yet another accomplishment,” said Pinsent, a Stratford Festival colleague of Plummer’s.

“He wanted to cover the entire baseball diamond of showbusiness.”

Pinsent said Plummer gave the impression that “the road is wide and the work is plentiful” for veteran actors.

“(It was) certainly enough to keep him busy for as long as he wanted,” he added.

“He simply would continue to turn out the good ones, and boy he did.”

The actor went through a particularly fertile creative period in his golden years, receiving his first Academy Award at age 82 for his supporting turn as a widower who embraces life as a gay man in “Beginners.” The trophy made him the oldest-ever Oscar winner in an acting category.

“You’re only two years older than me darling, where have you been all my life?” Plummer said as he accepted the statuette in 2012.

He also received a nomination in the supporting actor category in 2018 for “All The Money In the World,” a mere month after he’d replaced Kevin Spacey as billionaire J. Paul Getty in Ridley Scott’s biographical drama. Spacey was abruptly cut from the film in the wake of sexual assault allegations.

The “All the Money in the World” situation made Plummer a social media sensation, with fans heralding him for stepping in at the last minute.

The more mature he got, the more the scripts improved and the more he learned about his craft, said Plummer, who scoffed at the word “retire.”

“If you love your work, which I do — and I’ve grown to love it more and more as I get older and realize that I’ve got to cram a lot in before I croak — I wouldn’t think of stopping,” Plummer told The Canadian Press in December 2010.

Christopher Orme Plummer was born in Toronto in 1929 into a notable family.

His great-grandfather on his mother’s side was Prime Minister John Abbott. His parents divorced when he was a baby and Plummer was raised by his mother’s family in Montreal, where he became acquainted with the arts.

One of his school classmates was Oscar Peterson, who went on to become a Canadian jazz legend. He also developed a love of classic literature through childhood reading sessions with his family.

Plummer acted with the Montreal Repertory Theatre and made his professional debut in 1948 with Ottawa’s Stage Society, which later became the Canadian Repertory Theatre. He also worked at the CBC, in radio and television.

By his early 20s he was already touring the U.S. in plays. His Broadway debut came in 1954’s “The Starcross Story.” That was promptly followed by his film debut, Sidney Lumet’s “Stage Struck.”

Plummer made his debut at Ontario’s Stratford Festival in 1956, playing Henry V. It was one of the most exciting theatrical experiences he’d ever had, he once told The Canadian Press, and it was at a festival he came to regard as a second home of sorts.

But it was in 1965, with the release of “The Sound of Music,” that Plummer would become forever known to moviegoers as a crusty Austrian widower whose frosty heart is melted by a young nun-turned-governess hired to care for his children.

The film, of course, has become a classic, but Plummer expressed disdain for the production, calling it “The Sound of Mucus.” He was careful to add, however, that he had “terrific memories” of making the movie, and forged a lifelong friendship with co-star Julie Andrews (he once said that working with her was like “getting hit over the head with a Valentine”).

He continued varied work throughout the 1970s, including “The Return of the Pink Panther” and “The Man Who Would Be King,” and played Sherlock Holmes in “Murder by Decree.”

One of his best-known roles in the 1980s came on television when he played Archbishop Vittorio Contini-Verchese in the miniseries “The Thorn Birds.”

Plummer worked steadily in the 1990s, in films including “Star Trek VI: The Undiscovered Country” and “Dolores Claiborne.”

In 1999, he was lavished with critical praise for portraying journalist Mike Wallace in Michael Mann’s “The Insider” alongside Al Pacino and Russell Crowe.

He was married three times. His first marriage in the 1950s, to actress Tammy Grimes, produced a daughter, Amanda, an accomplished actor whose film credits include “Pulp Fiction.” He married and divorced again in the 1960s — his second wife was journalist Patricia Lewis. Plummer married dancer/actress Elaine Regina Taylor in 1970.

And despite splitting his time between Palm Beach, Fla., and Connecticut, he never forgot his Canadian roots.

In 2002 he appeared in Toronto director Atom Egoyan’s film “Ararat.” In 2007 he did “Emotional Arithmetic,” based on a novel by Canadian author Matt Cohen and shot in Quebec. And in 2019 he shot the first season of “Departure” in Toronto.

Plummer spoke frequently of his love of theatre and the thrill of performing in front of a live audience.

The actor returned to Stratford numerous times, including in 2008 to play the lead role in Bernard Shaw’s “Caesar and Cleopatra.”

The year that followed was a particularly busy one. He voiced explorer Charles Muntz in the 2009 animated hit “Up” and played the titular character in “The Imaginarium of Doctor Parnassus,” released the same year.

His other memorable roles include industrialist Henrik Vanger in 2011’s “The Girl With the Dragon Tattoo” and the patriarch in the 2019 murder mystery “Knives Out.”

“You’ve got to keep going,” he told The Canadian Press in February 2010 when asked about his busy schedule. “I’m very happy that I seem to be getting more work as I get older. I seem to be doing more than less, which is fabulous, because it keeps one young.”

The “celebrity” portion of his job, however, was not something he enjoyed. Plummer’s first trip to the Oscars was in 2010.

“I don’t like going unless one is up for an award. Why would one put oneself through that agony?” he asked.

“I’m not crazy about (the fanfare). It’s a business you know, it’s a flesh-peddling business, and I don’t always like the feeling on the red carpet. You feel like you’re pushing yourself, which I don’t do.”

And yet, he seemed to revel in the moment as he received an armful of trophies for his role in “Beginners,” culminating in the Oscar.

“I have a confession to make. When I first emerged from my mother’s womb, I was already rehearsing my Academy thank-you speech,” he said onstage at the awards show. “But it was so long ago, mercifully for you I’ve forgotten it. But I haven’t forgotten who to thank.”

He went on to express gratitude to his family, his fellow nominees, “Beginners” director Mike Mills and co-star Ewan McGregor.

In addition to the Oscar, Plummer was a companion of the Order of Canada and a recipient of the Governor General’s Lifetime Achievement Award. He also won two Tonys, two Emmys and a Genie.

For all of his success, the on-set nerves never went away, he admitted.

“I usually walk on terrified that I’m going to not make it through the first take,” Plummer told The Canadian Press in January 2020.

“Without jitters, you’re no good, you’d be terrible. They supply all sorts of different colours.”

— With files from Victoria Ahearn and David Friend