Leafs blow 3-0 lead, lose in OT to move to brink of elimination 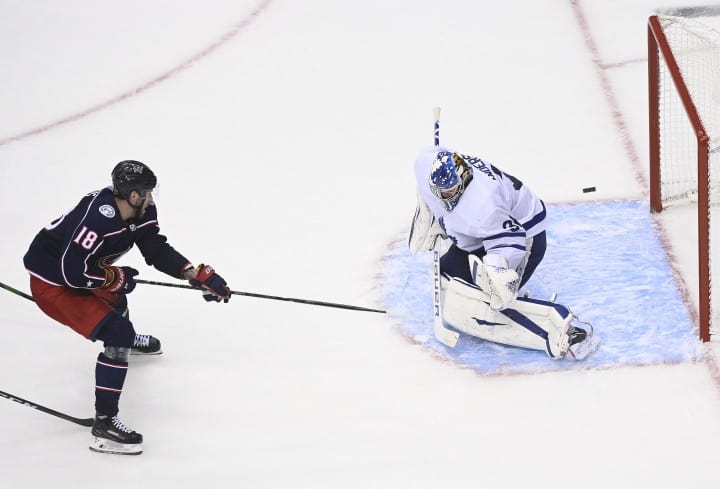 The Maple Leafs have shown an ability to rebound from tough, demoralizing losses this season.

They’re going to have to dig deep to respond after what transpired Thursday — and fast.

Pierre-Luc Dubois scored his third goal of the night in overtime as the Columbus Blue Jackets stormed back from a 3-0 deficit to stun Toronto 4-3 and take a 2-1 lead in the teams’ best-of-five qualifying round series.

After a number of chances at both ends in the extra period, Leafs captain John Tavares turned the puck over in the offensive zone and Columbus broke the other way, with Dubois taking a pass from Alexandre Texier and roofing a backhand on a break past Frederik Andersen at 18:24.

Asked where things turned for Toronto after building a three-goal lead in the second period, head coach Sheldon Keefe indicated there were troubling signs long before the collapse on the scoreboard.

“We reverted back to a lot of really bad habits. We didn’t have any real purpose or plan to our game. We were just making it up as we went along.”

Seth Jones scored in regulation for the Blue Jackets, the No. 9 seed in the Eastern Conference as part of the NHL’s restart to its pandemic-delayed season. Cam Atkinson added two assists for Columbus, which can clinch a spot in the regular 16-slot playoff bracket with a victory in Game 4 on Friday night — less than 21 hours after the players exited the ice at Scotiabank Arena.

“We stayed with it,” Atkinson said. “Started playing some good hockey late second period and found ourselves back in it. Overtime wasn’t our best, but we found a way.”

Joonas Korpisalo, who recorded a 28-save shutout in his post-season debut in Game 1 and was almost as good in the Leafs’ 3-0 victory in Game 2, allowed three goals on 15 shots before getting the hook in favour of Elvis Merzlikins in the second period.

Merzlikins was perfect in relief, finishing with 21 saves, including a couple big ones in overtime.

Nick Robertson, with his first NHL goal, Cody Ceci and William Nylander replied for Toronto, the East’s No. 8 seed. Andersen made 39 saves for the Leafs, while Alexander Kerfoot and Kasperi Kapanen added two assists each.

“We’ve got to put this behind us and be ready to come back.”

Down 3-1 heading into the third, the Blue Jackets tied it up with goals 3:21 seconds apart as the Leafs came fully unglued.

Jones got Columbus within one at 7:27 on a laser past Andersen’s ear after Toronto couldn’t get the puck out before Dubois, who got a tongue lashing from fiery Blue Jackets head coach John Tortorella in Game 2, beat the Toronto netminder on a 2-on-1 under the blocker at 10:49.

“I mean, nothing different, really,” Dubois, who registered the second hat trick of his career, said of Tortorella’s outburst. “Stuff like that happens.”

“Luc’s a good player,” Tortorella added. “We’re trying to get consistency out of him, trying to teach him what it is to be a pro in all situations. And, obviously, he was a huge part of it tonight.”

Andersen stopped Vladislav Gavrikov and Dubois on the doorstep with less than four minutes left in regulation before Merzlikins robbed Auston Matthews from in tight at the other end. Matthews then turned the puck over in his own zone with under than 40 seconds on the clock, forcing Andersen to make a big stop on Boone Jenner.

“When you’ve got a 3-0 lead, we have to find a way to close that one out,” Tavares said. “We understand what’s facing us.”

The Leafs, who like Columbus had 81 points when the schedule was suspended in mid-March because of COVID-19, were without defenceman Jake Muzzin after he was injured on an awkward collision late in Game 2. The 31-year-old — one of Toronto’s leaders on and off the ice — was released from hospital and is back at the team hotel inside the secure zone, but unavailable for the rest of the series.

Martin Marincin dressed in Muzzin’s place, with Travis Dermott moving up into the top-4 to play alongside Justin Holl. Dermott and Holl skated together when Muzzin was out with foot and hand injuries before the season was halted.

Toronto opened the scoring with 68 seconds left in the first while killing a Dermott penalty when Ceci blasted a shot from well out that looked to be going wide, but instead struck the skate of Jones and pinballed past Korpisalo.

The goal, which came after Mitch Marner thwarted Jenner at the lip of Andersen’s crease, was not only the first of Ceci’s post-season career, but also the blue-liner’s first in 57 games and first while short-handed in the NHL.

The Leafs had a couple of great chances earlier in the period, with Ceci, Marner, Kapanen and Tavares all coming close on Korpisalo, while Jenner rattled the crossbar behind Andersen.

Toronto scored the first power-play goal of the series at 7:08 of the second when Marner, who found iron earlier in the period, slid a pass from the point down to Nylander.

“Luckily it went in,” said Robertson, who was selected 53rd overall at the 2019 draft. “I was excited, but you’ve got to put that excitement away.”

Tortorella pulled Korpisalo in hopes of getting a spark, and got a response shortly after a Leafs’ penalty expired at 11:39 when Dubois solved Andersen to start the comeback.

“We’re going to learn a great deal,” Keefe said of his team heading into a must-win Game 4. “We’ve been through adventures like this with this team before. We’ve always come back with a great performance.

“(Friday) will be no different.”

This report by The Canadian Press was first published Aug. 6, 2020.