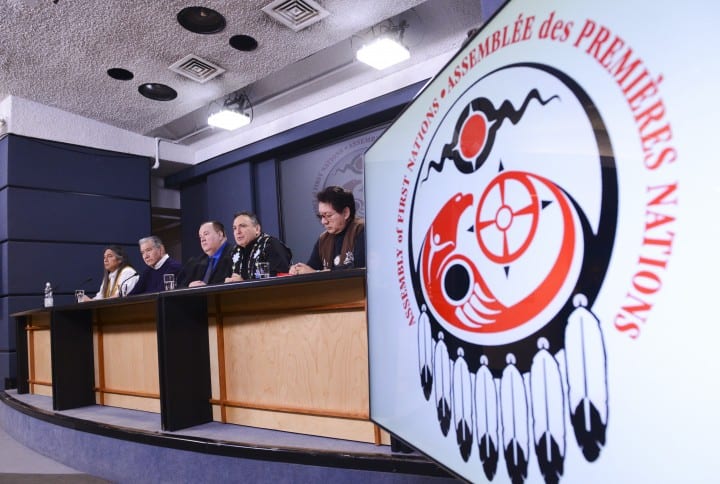 Indigenous leaders from across Canada say they are worried supports promised by the federal government to help First Nations, Inuit and Metis deal with the fallout of COVID-19 might not do enough to prevent the most vulnerable people from falling through the cracks.

The Assembly of First Nations declared a state of emergency for its First Nations this week, saying the money Ottawa has committed to date will not go far enough to meet the unique needs of Indigenous populations facing this pandemic.

“This is about the health and safety of First Nations families and communities,” said National Chief Perry Bellegarde. “We need to act now.”

The Liberal government has pledged $305 million for a new Indigenous community support fund to address immediate needs related to COVID-19.

Indigenous Services Minister Marc Miller said the money will flow directly to Indigenous communities, and be flexible so they can help them adapt their responses to local needs.

“We’ll do this quickly and with a sense of urgency that this situation obviously necessitates,” he said Wednesday in Ottawa. “I want to stress that this is only one of the financial measures that we are contemplating for First Nations, Inuit and Metis.”

David Chartrand, vice-president of the Metis National Council, said some of the money headed to Metis communities will help carry people as they wait for broader emergency support benefits to come through.

But he wondered why Metis communities are not being given supplies like hand sanitizer and protective equipment that has been delivered to neighbouring First Nations.

In Canada’s North, Inuit communities are especially vulnerable to severe outcomes from both illness and disruption of services, says Natan Obed, president of the Inuit Tapiriit Kanatami.

Not only are Inuit in the North already more susceptible to respiratory illnesses from overcrowded housing, poverty and food insecurity, they also rely on outside jurisdictions — mainly urban centres — for most health services.

“We have very vulnerable populations and the access to care and the crisis response that would need to be mobilized are all very challenging, tough, unique circumstances,” Obed said.

Inuit leaders and communities have received assurances from Ottawa the federal government will be there to help in the event of an outbreak, and Obed says he feels confident the government is being vigilant.

But he still worries about the larger economic impact the pandemic is having on his homeland, the traditional territory known as Inuit Nunangat, especially since 49 of 51 communities can only be reached by air for much of the year.

“The incredible strain that COVID-19 is placing upon our airline industry is especially stark in relation to Inuit Nunangat,” Obed said.

“There will have to be some very innovative solutions in short order to ensure our communities continue to get the perishable goods and services that they need,” he said.

Many Inuit women face additional challenges, especially in Nunavut where there are high rates of domestic violence. More than 70 per cent of Inuit communities currently lack safe shelters.

The need to stay home and self-isolate while families could also be dealing with the stress of lost income due to the pandemic will only exacerbate the danger to women at risk, Rebecca Kudloo, president of the Pauktuutit Inuit Women of Canada.

“When people are isolated in their homes, family violence is going to go up, especially in the North where there is overcrowding and sometimes it’s very difficult to distance yourself from others. That’s a big concern,” she said.

Days before the coronavirus was declared a global pandemic, Pauktuutit was calling on the federal government to “urgently” provide $20 million for shelters and second-stage transitional housing in Inuit Nunangat and in Ottawa for Inuit women and children fleeing violence.

Since then, the government has announced $50 million for women’s shelters to address this very concern, but Kudloo says this will be spread very thin across the country.

Meanwhile, some Indigenous leaders are worried about how Indigenous Peoples outside distinct communities or reserves, including those living in urban centres, will get help in the event of a major outbreak.

National Chief Robert Bertrand of the Congress of Aboriginal Peoples, which represents off-reserve status and non-status Indigenous Peoples, said he is concerned about the homeless and those in prison who are unable to self-isolate at home.

“The people living in the streets … those people are congregating just to keep warm all together. And the off-reserve in our prison system right now — once the coronavirus gets into the prison system it’s going to spread like wildfire.”

Lorraine Whitman, president of the Native Women’s Association, is concerned about mothers and families who do not live on reserves not getting the same supports as those who do.

There is also worry about elders feeling lonely in self-isolation and questions about how traditional and cultural ceremonies and practices such as sweats, round dances and pipe ceremonies can continue safely with concerns about spreading the virus.

That’s why Whitman is encouraging people to drum, dance, sing and pray every Sunday at 1 p.m. and share their activities online.

“We can’t hold our hands in this round dance, but what we can do is we can reach with our spirit and our soul and our prayers knowing that will reach another person.”