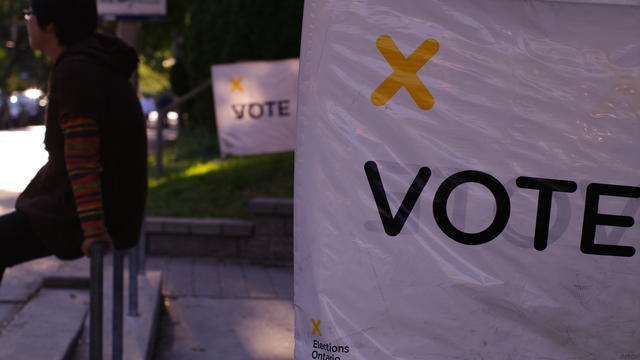 How things can change on a dime during a provincial election campaign.

A previous analysis of opinion polling back in March showed that the Ontario PC party would have won a sizable majority government and putting leader Doug Ford in the premier’s chair if the June 7 vote was held back then.

But now, two new polls released over the long weekend have shown an interesting result as this campaign heads into the final two and half weeks: the PCs vote has stalled, while the  Ontario New Democrats have surged at the expense of the governing Liberals.

The first poll from Abacus Data, sampling the opinions of over 2,800 Ontario voters between May 16-18, showed the PCs and NDP neck and neck with one another (35 per cent for the Tories versus 34 per cent for the NDP) with the Liberals a distant third. 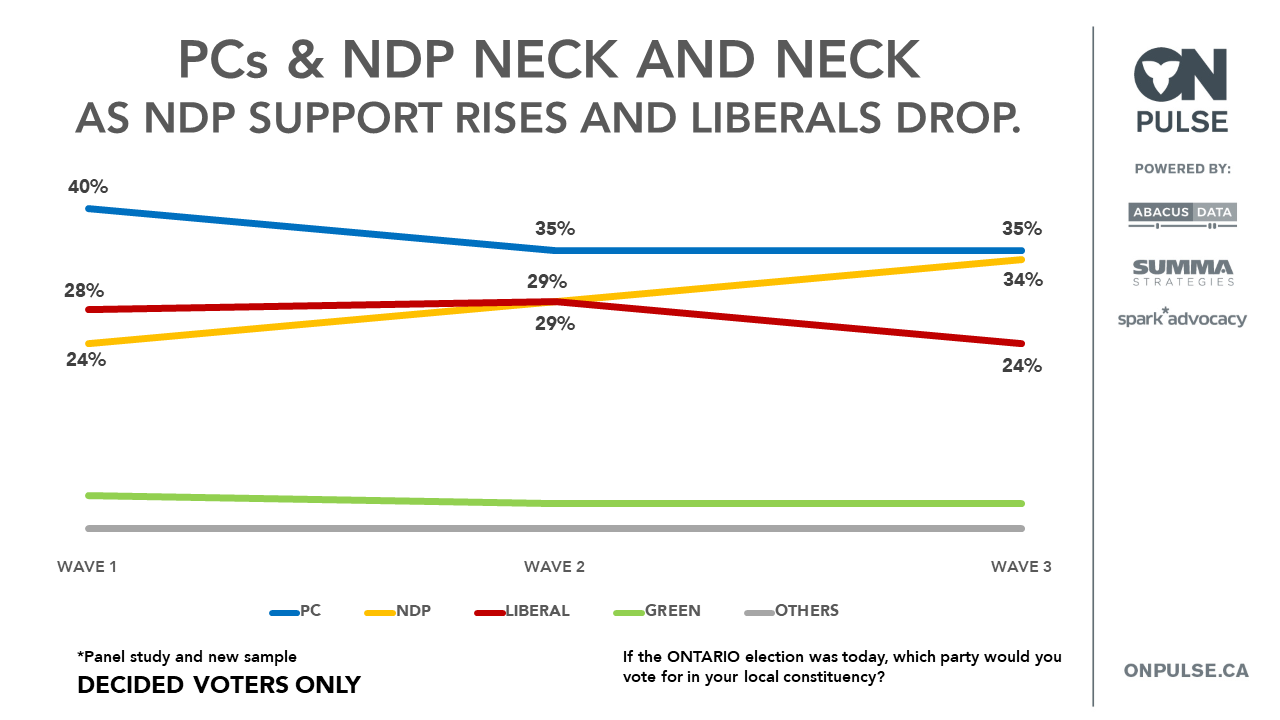 The second poll, conducted with Ipsos according to this Global News article, conducted between May 18 to May 21 surveying 1,000 voters showed a similar result, but this time with the NDP ahead by one point at 37 per cent and the PCs at 36 per cent. But they also showed that the Tories had dropped four points since their last survey and the NDP were up by 2 per cent.

Let’s take a look at some of the regional breakdowns from these two surveys:

The poll done by this firm shows that the number of voters wanting change in this election has only ever grown more and more (with 83 per wanting change, 62 per cent of those surveyed say they definitely want a change in government).

There is also a split in the voting intentions between age groups, with those 18 to 44 opting for the NDP and those over 45 preferring the PCs. 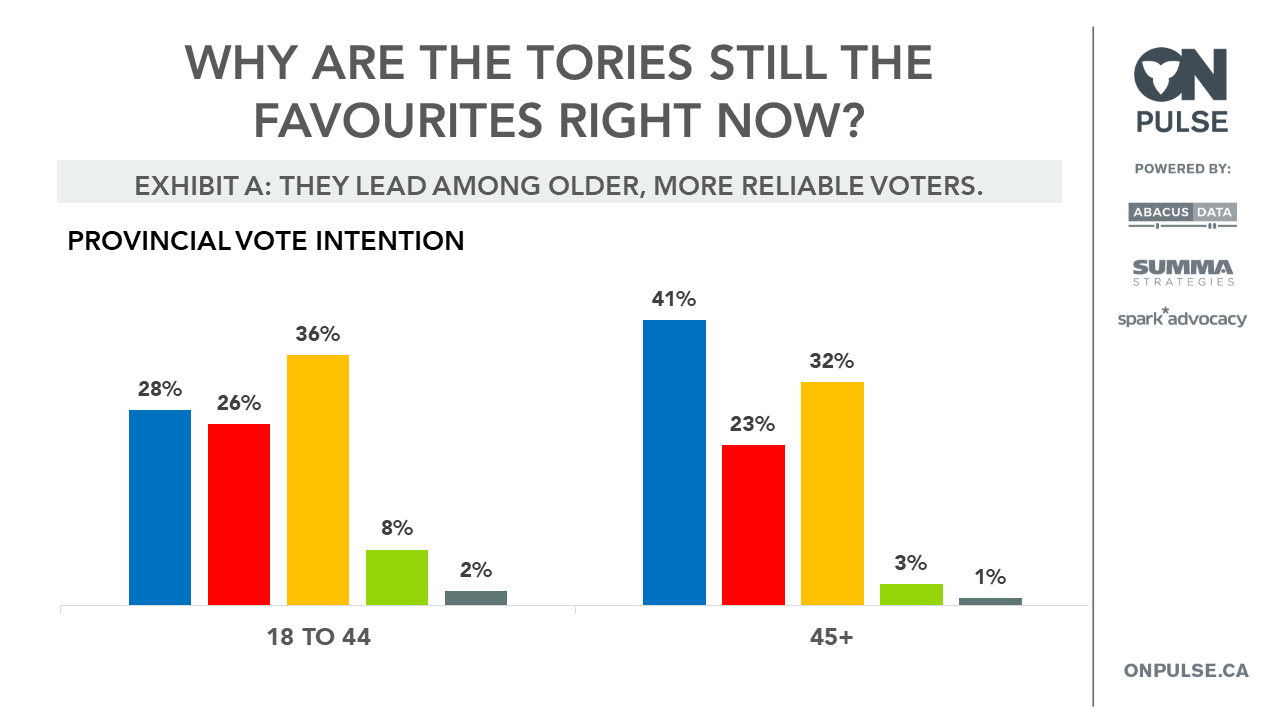 And here are the regional breakdowns from the Abacus poll: 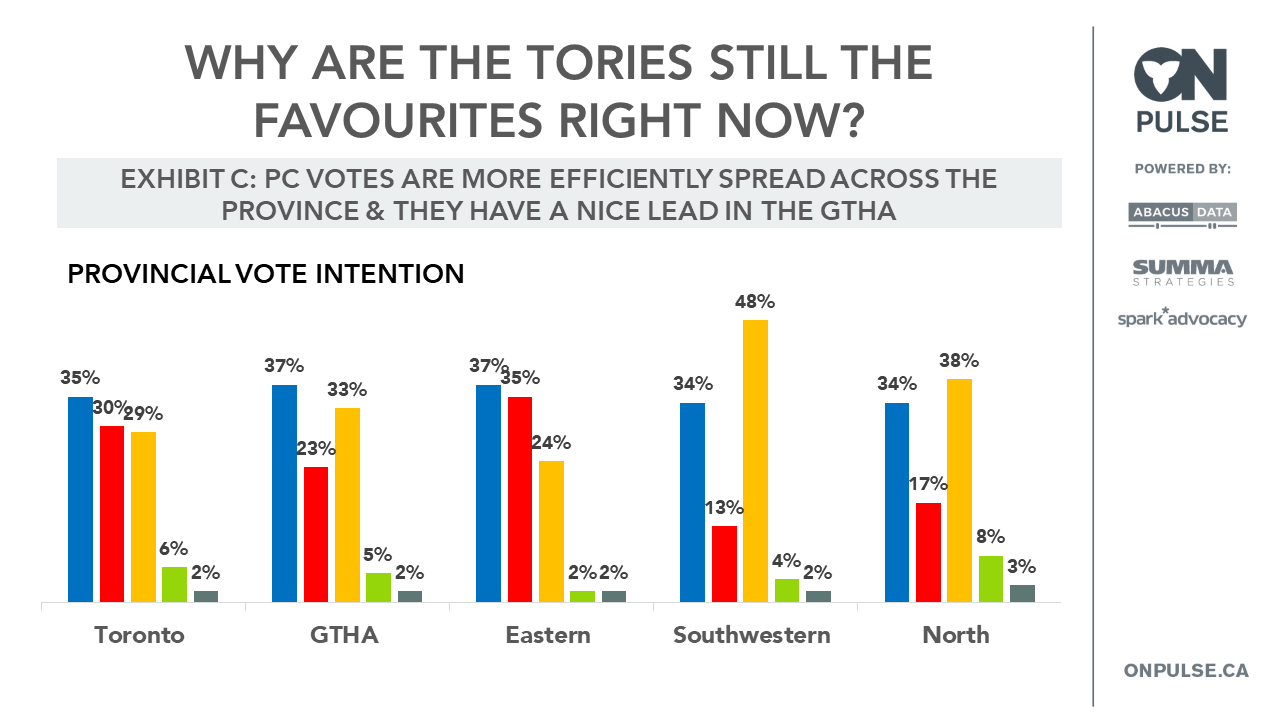 You can see some surprising results in that Toronto, once the political bastion for the Liberals, has shown the governing party bleeding support to the other parties. As for the GTHA, the NDP are rapidly becoming second place (this section includes Hamilton, which is more NDP friendly than other 905 communities). Still you have to wonder how strong the NDP could become in the 905 with numbers like this.

While the NDP are dominating in Southwestern Ontario and the North, this poll shows that while they are tied with Andrea Horwath’s team, the PCs have a more stabilized, structural level of support across the province, which still gives Ford’s party the edge.

But one last bit of information from Abacus shows that of all three major parties, the NDP is showing the most room to pick up new supporters, or votes accessible to the party: 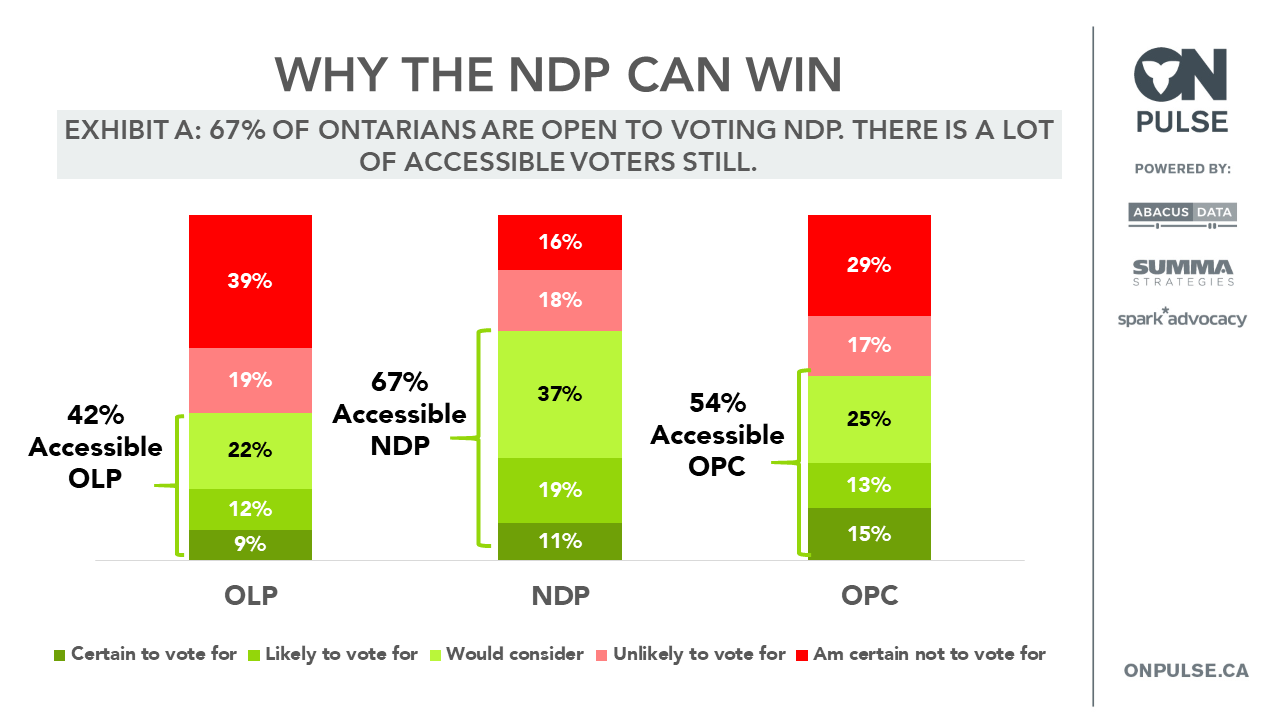 In the Ipsos survey, a similar province-wide result with both NDP and PCs neck and neck is evident. But they also have some interesting regional breakdowns as well: 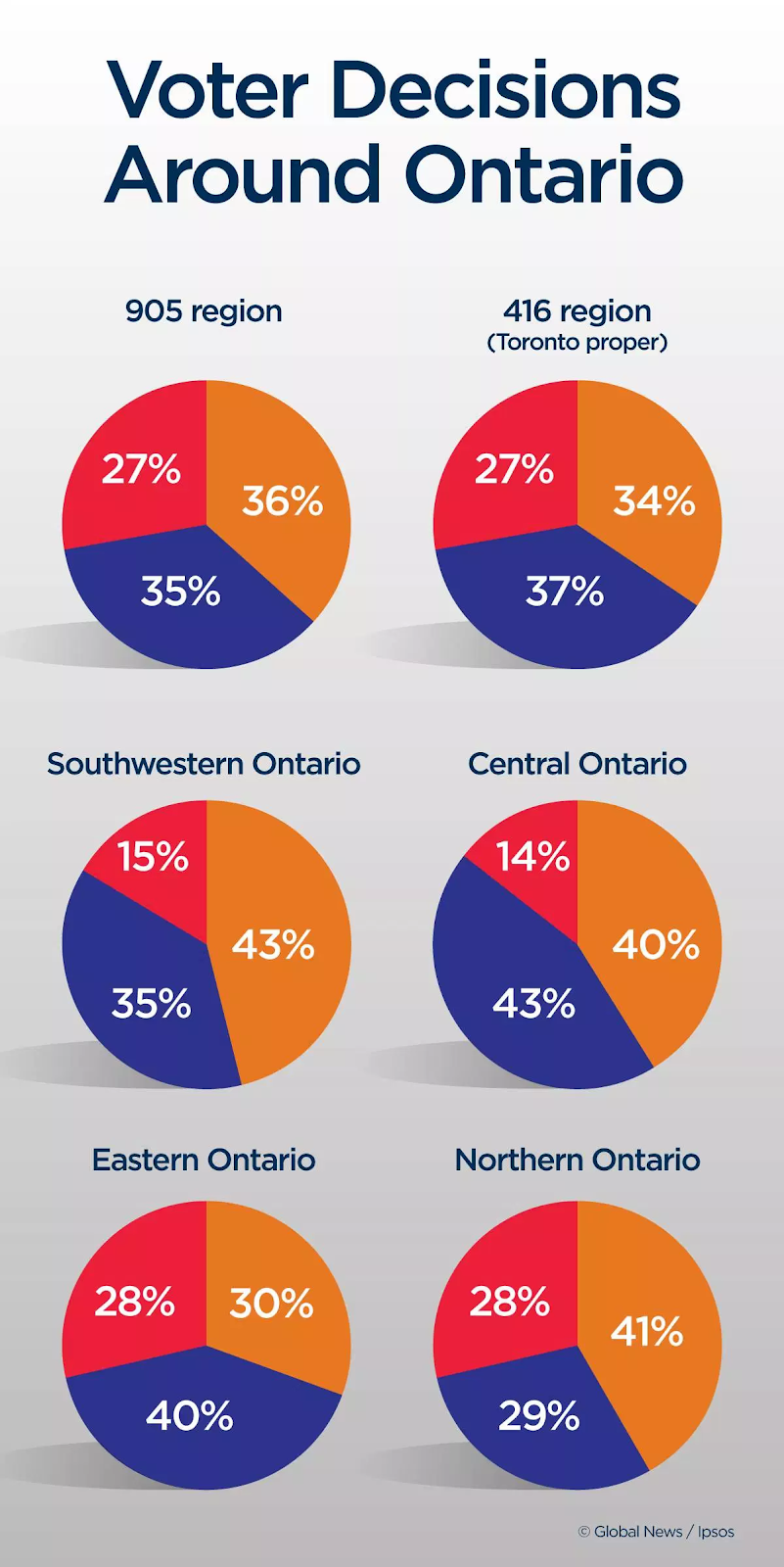 A similar trend is showing here, with the NDP and PCs neck and neck in the critical regions of Toronto and the GTA. I think the surprising result is in Central Ontario, mostly categorized as the area around the city of Barrie, Grey and Simcoe County, the NDP are at 40 per cent closing in near the PCs at 43 per cent.

If you want to try having some fun with numbers, then there is this Ontario 2018 Election Simulator where you can enter the province wide vote percentage and it will show you which party will win each seat, because in the end the election’s outcome will come down to riding by riding results.

There are several reasons that could explain this trend. Ford is running on traditional right leaning themes of cutting waste and lowering taxes, but his lack of an actual election platform and inability to expand on the famous catchphrase he developed along with his late brother of “finding efficiencies” is hurting him, particularly with those whose votes he needs to expand the Tory base.

There is also the recent developments of an alleged data hack at the 407 ETR which resulted in the compromised information of some 60,000 customers, and revelations that almost 30 separate Tory candidates could have benefited from that information in their nomination contest or fundraising efforts. Whether those allegations are true or not, it gives a whiff of shadiness in the Tory camp that raise concerns of ethics within the PC party.

As for the New Democrats, they may be on an uptick now but they have their own stumbles as well, such as Horwath having to apologize recently for a $1.4 billion mistake in their platform due to an accounting error, which while she says she apologized for give the impression that the NDP may not be ready for prime time.

But then again, when you have over 80 per cent of Ontario voters desiring a change in government, it doesn’t seem like anything other than a divine miracle could stop a tide sweeping out this 15 year old Liberal government.

The question now is will that tide be blue or orange?

We will find out on June 7.