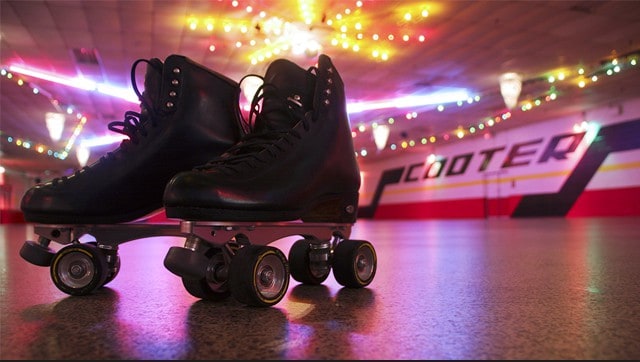 There’s a quiet part of the city’s west end where Southdown Road meets Royal Windsor Drive. If you drive east down Royal Windsor, you’ll make your way into Port Credit and, eventually, Toronto. If you go west, you pass truck stops, businesses and — perhaps most importantly — the iconic Scooter’s Roller Palace.

The mighty roller skating/inline skating mecca is a 24,500 sq. ft. facility that first opened its doors in 1975. Current owner and general manager Michael Mastrodicasa’s family took over in 1994 and opened in 1995.

Since that time, Scooter’s (which I actually visited for a birthday party in 1996 when Ace of Base and Dance Mix 95 were huge) has been staying relevant (it’s hard to keep a retro — some might argue antiquated — concept alive and thriving as nostalgia for a bygone era fades away) by expanding its space, improving its aesthetic and recapturing people’s attention. “We’ve been able to rejuvenate it and bring back business that was lost over the years,” says Mastrodicasa. “We’ve renovated the interior and expanded the building and improved the floor, lighting and sound while maintaining the nostalgia of the roller rink.”

The charmingly retro throwback to a time many pint-sized patrons never knew keeps guests firmly ensconced in the past by featuring old school video games, glow in the dark carpets, disco balls, a snack bar and vintage track lighting.

As to what really keeps Scooter’s alive, Mastrodicasa says the focus on fitness-oriented (there’s no Wi-Fi, as Scooter’s aims to encourage exercise and socializing) family fun has a lot to do with the establishment’s longevity.

“We’ve really excelled at providing a fun family environment,” he says. “We aren’t liquor licensed and we’re wholesome. We don’t go the liquor route because it brings potential trouble. We cater to birthday parties for kids three to 15 years old and do five to 30 birthday parties a weekend, sometimes more.”

While Mastrodicasa makes no bones about operating a G-rated business (Scooter’s also hosts Christian Gospel Skates [insert pun about holy rollers here] for the church-going crowd), he does admit that being a kid-friendly place poses unique challenges that he has to be creative in meeting.

“During evening sessions we cater to an older crowd,” he says. “Adults come out for the experience, so the crowd and DJs are more conducive to [older age groups during night skates]. Keeping older people is our biggest challenge, but people like to try new things.”

To keep adults interested, Scooter’s hosts adult birthday parties and late night skates that run from 8 pm to 3 am on the first Saturday of every month. The facility also has adult-only sessions that let mature skaters avoid falling children doing the chicken dance.

They also get a variety of DJs — and have even had DJ Starting from Scratch spin for them — to play a range of more adult-friendly hip-hop, R&B and funk.

People are also welcome to rent out the facility for funkier, more thematic private functions. And in the interest of giving back, the establishment also does charitable work.

Mastrodicasa says that Scooter’s happily functions, a lot of the time, as a place for the underage crowd to “go out, be social, and meet other people.”

But although he describes Scooter’s as “safe haven for the local kids in the area,” he also says that the 19+ crowd can have a good time — and maybe even meet someone special.

“We’ve had a number of people meet their spouses here,” he says. “It’s something unique and different to do and it offers a different perspective. We’ve had people propose on the floor here because they first met here.”

Also, people looking to meet a locally-grown, internationally-famous celebrity may need look no further than Scooter’s.

As for what the future holds for a business that’s more than stood the test of time, Mastrodicasa says growth is always on the agenda.

“We continually try our best to try to introduce our facility to people who haven’t been here before.”