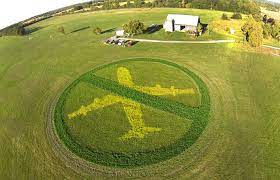 An organization established to stop the building of an international airport in north Pickering has landed an Ontario Nature conservation award for its efforts.

The Steve Hounsell Greenway Award, given out each year to people or group who have worked to preserve a natural heritage system core area or corridor, was awarded this year to Land Over Landings for working to “preserve the rich farmland and natural heritage features” of the former airport lands in north Pickering.

More than 18,000 acres of farmland at the top end of Pickering were expropriated by the federal government in 1972 for an international airport that was never built. People or Planes, Land Over Lands’ predecessor, succeeded in stopping the project three years later but the lands remained in federal lands – just in case.

Land Over Landings was born in 2005 to oppose a new round of evictions and demolitions. The group refers to themselves as “part protesters but mostly advocates” and remain committed to preserving the rich farmland for future generations.

In 2013 and 2015, half the Federal Lands were transferred to Rouge National Urban Park. Land Over Landings now focus on saving the last 9,000 acres, where the threat of an airport still lives on.

Land Over Lands was one of 11 “inspirational and industrious” winners honoured by Ontario Nature, the voice of nature in Ontario.