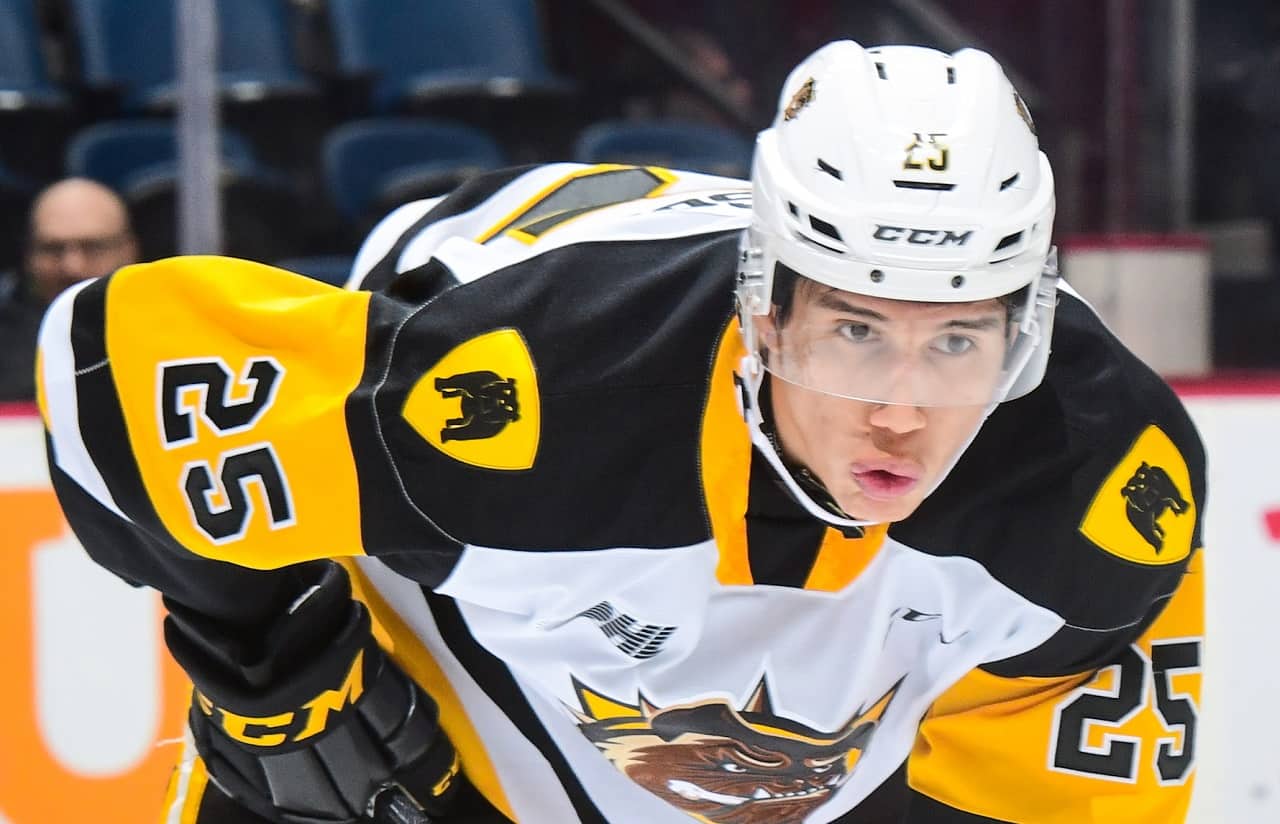 The black-and-orange jersey, with a Parkin-created crest and secondary sleeve logo, will be worn before the Bulldogs’ game against the North Bay Battalion on Friday (Nov. 25, 7 p.m.) and across the rest of the Ontario Hockey League season. The Bulldogs say they will auction the jerseys off after the season as a fundraiser for PALS, the Police Athletic League for Students through the Six Nations Police Service.
The 30-year-old PALS program was designed to build positive relationships between the police and 12- and 13-year-old children. Children in the program and police meet weekly after school, on school grounds, to use sports and recreation to help with personal development.

Parkin, who is a member of the Mohawks of the Bay of Quinte from Tyendinaga Mohawk Territory, has created a sensation in the sports worlds with his redesigns of logos of major pro teams such as the Toronto Blue Jays, Toronto Maple Leafs and Ottawa Senators that play on the traditional territory of Indigenous nations. In the summer, Parkin and fellow artists created a Blue Jays-inspired “Tkarón:to” baseball jersey to signal-boost Indigenous and supports Indigenous nonprofits. Some of his portfolio was showcased on TSN last month on the first night of the National Hockey League season.

For the Bulldogs, Parkin added design elements that, as he described in a team release, recognize all the Indigenous people who have called Hamilton home. Hamilton is on traditional territory of the Erie, Neutral, Huron-Wendat, Haudenosaunee and Mississaugas.

“I was looking into the Indigenous history of Hamilton and reached out to a couple of people who deal with that through McMaster (University) and the City of Hamilton, trying to gather more information on the history of the people who resided there,” Parkin said in a release from the Bulldogs.

“I wanted to showcase that I am Indigenous and I’m proud of my people and my culture,” Parkin added. “I’ve always wanted to put a little blend to show that I am indigenous and support indigenous people but also support a team that I love.” 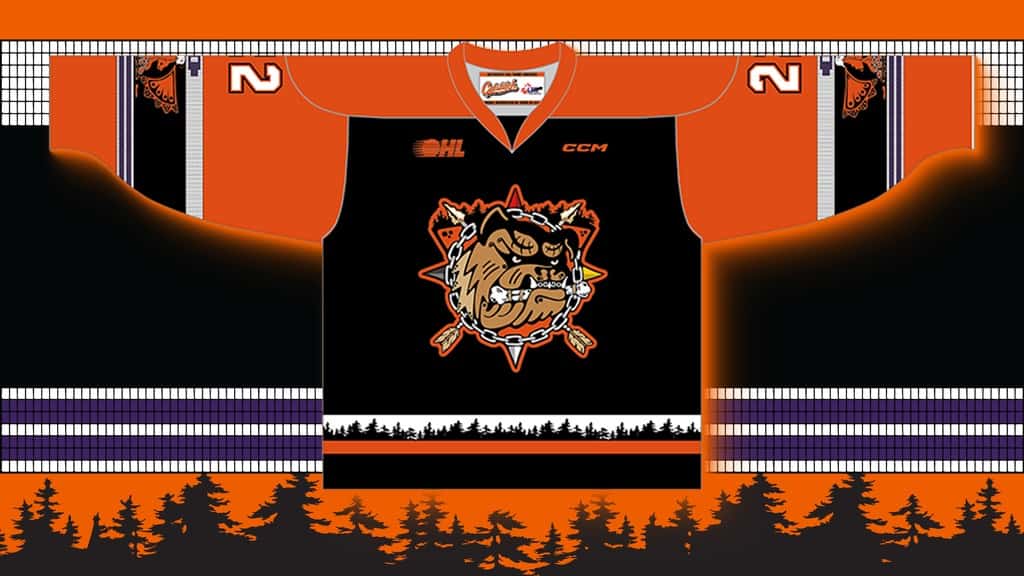 Parkin also included a warmup belt across the bared teeth of the Bulldog logo to symbolize his shared Six Nations ancestry with Hamilton winger Brenden Anderson. The 19-year-old from Ohsweken is in his second season with Hamilton.

“Having Brenden Anderson on the team means a little bit more now that I can do something that he can now wear there that shows he’s proud to be Indigenous.”

The secondary logo on the sleeve is also unique. The Bulldogs say, “The sleeve will carry the Eagle signifying the messenger sitting atop the tree of peace along with the dish with one spoon and two-row wampum.” 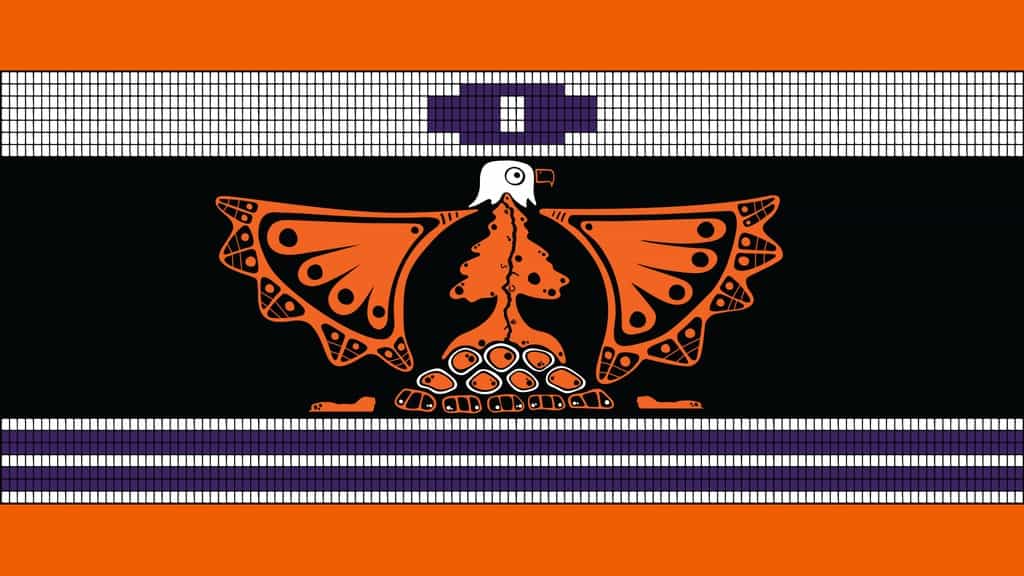 Parkin, 39, was born in Toronto but grew up in Tyendinaga and began exploring his talent for art as a student at the Quinte Mohawk School. Along with his sports designs, he has created the Pride logo for Tyendinaga, as well as designs used by a smoking cessation program and for Mohawk Family Services. One of his works hangs in the Cancer Centre of Southeastern Ontario at Kingston Health Sciences Centre.

Tyendinaga is the main First Nation of the Mohawks of the Bay of Quinte. Coincidentally, it is east of Belleville, Ont., which had an OHL franchise for 34 seasons before Michael Andlauer purchased it in 2015 and rebranded as the Hamilton Bulldogs. The team has won two of the last OHL championships (2018 and ’22).

The current Bulldogs have a .417 point percentage after 18 games, which puts them seventh in the OHL Eastern Conference.

The 7 p.m. game against North Bay on Friday starts a run where the Bulldogs play six out of eight games at FirstOntario Centre, including a 2 p.m. matinee against the Sault Ste. Marie Greyhounds on Sunday.