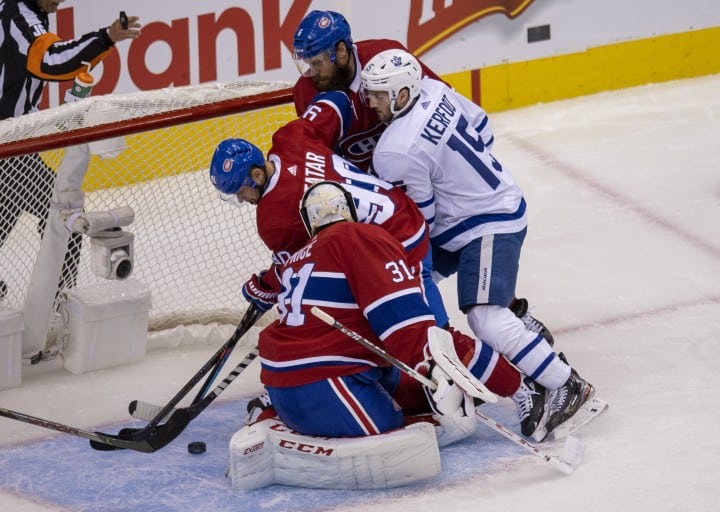 Sheldon Keefe only really noticed the fact his team was playing in front of no fans during Tuesday’s national anthem.

Other than that, the Toronto Maple Leafs head coach felt like it was a pretty normal game — in an extremely abnormal time.

Morgan Rielly had a goal and two assists, Alexander Kerfoot scored twice, and the Leafs defeated the Montreal Canadiens 4-2 in their exhibition matchup as the NHL’s restart to its pandemic-hit 2019-20 season got into full swing.

“During the anthems is a time when you’re looking at the flag and you’re taking in the whole environment,” Keefe said. “It’s much different today than what you’re accustomed to. It’s the time when you really feel the moment and are really missing the fans and the environment, and recognize what they bring.

“Once the puck dropped…it really just felt like hockey and you didn’t notice it a whole lot.”

The first-ever July meeting in the franchises’ 103-year rivalry, things were made even stranger by the fact Montreal was designated as the home team and occupied the Leafs’ dressing room at Scotiabank Arena.

“2020’s been strange,” Habs forward Brendan Gallagher said. “That was probably the strangest thing we’ve been through.”

Toronto, meanwhile, wore its road whites and used the visitors bench for the first time in the building’s 21-year history.

“The whole atmosphere is just different considering what we’re going through,” Leafs captain John Tavares said. “You just kind of go the flow and try to focus on proper preparation as best you can.”

Roughly a dozen rows of seats up from the glass were tarped off in the spectator-less venue, while eight separate screens were suspended from the ceiling, adding a video game-like feel as both teams played a game for the first time in 140 days.

“There’s a lot that’s been put into this,” Tavares added. “Just fortunate to be back out there competing.”

Ilya Mikheyev had the other goal for the Leafs, who got 28 saves from Frederik Andersen. Tomas Tatar and Paul Byron replied for the Canadiens. Carey Price stopped 19 shots for Montreal.

The Canadiens open their best-of-five qualifying round series against the heavily-favoured Pittsburgh Penguins on Saturday — the first day the games will truly matter — before the Leafs do the same 24 hours later against the Columbus Blue Jackets.

Gallagher said his team will need to simplify its approach this weekend.

“We were all probably guilty of it,” he said. “The brain wasn’t keeping up.”

Mikheyev, who suffered a gruesome wrist laceration in late December, scored just 33 seconds into his first game back inside an empty, cavernous building as the league resumed action after shuttering operations in mid-March because of COVID-19.

Kerfoot made it 2-0 at 6:46 of the second when he roofed a rebound after Kasperi Kapanen was stopped on a shorthanded breakaway.

Tatar got one back for Montreal with 3:04 left in the second on a power play, but Kerfoot tipped Rielly’s shot late in the period to make it 3-1. Leafs rookie Nick Robertson, who was making his NHL debut after a 55-goal season in the Ontario Hockey League, picked up the other assist.

“He’s a very impressive young kid to step into this situation,” Kerfoot said. “You can see whenever he’s on the ice how good he is.”

Byron made it 3-2 at 8:07 of the third, but Rielly restored the two-goal lead 1:22 later with Toronto’s second shorthanded goal of the night.

“Overall we were happy with it,” the Leafs defenceman said of his team’s effort. “Any time you play any kind of pre-tournament, a pre-season game like this, there’s going to be some kinks to work out.”

While television viewers were treated to artificial crowd noise, media seated in the upper bowl could hear almost every word uttered on the ice — including a couple of expletives — which is why the NHL has implemented a five-second delay on broadcasts. One particularly loud curse word bellowed in the second period, however, got past censors.

Music blared as the players, who are staying inside the NHL’s tightly-controlled bubble that includes the Fairmont Royal York a short walk away, hit the ice for warmups with only journalists, arena employees and league staff looking on.

One member of the Leafs let out a giant “wooooo,” while Toronto winger Mitch Marner kept up his pre-game tradition by pretending to throw a puck over the glass to an imaginary fan after warmups.

“It reminds me a little bit of like a minor hockey tournament where you’re there and staying in the same hotel as a bunch of other teams,” Kerfoot said of the first few days in the bubble. “It’s got obviously a different feel, but this whole this whole tournament is unique and situation that we’re in is unique.”

Players from both teams stood side-by-side on the blue line for the national anthem as a show of solidarity with social justice movements which, like the pandemic, have been front of mind since hockey was last played in North America.

The Eastern Conference clubs are situated in the Toronto hub as part of the 24-team restart, while the West has been centralized in Edmonton.

With the Canadiens designated as the home side, Coldplay’s “Fix You” rang out around the building as the teams took to the ice before Mikheyev finished off a 2-on-1 with John Tavares on the game’s first shot.

There was barely any contact in the only exhibition contest for both teams until Toronto defencemn Jake Muzzin thumped Montreal winger Alex Belzile to the ice early in the second.

The offensively-loaded Leafs looked disjointed much of the night, but neither team was helped by sloppy ice conditions in the second game of the day in humid Toronto.

Montreal was all but buried as the NHL’s 24th-ranked team when the schedule was suspended 4 1/2 months ago because of the virus, but was handed a lifeline when the league settled on a 24-team restart plan.

Toronto sat in a playoff spot, but because it sat outside the top-4 in the conference, has to go through Columbus to make the usual 16-club playoff bracket.

“I thought we gave up the neutral zone at times a little bit too easily,” said Keefe, who has focused heavily on defensive structure during training camp. “But I like the way we worked.”

This report by The Canadian Press was first published July 28, 2020.