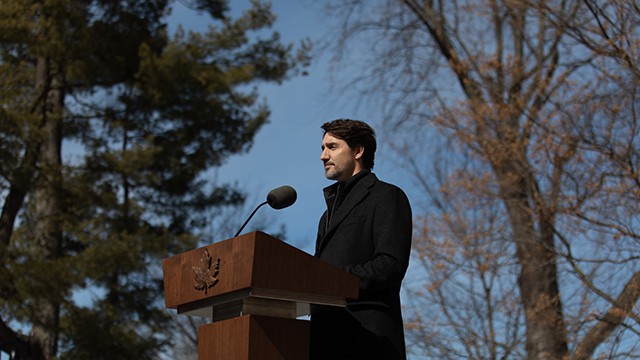 At an April 28 press conference, Prime Minister Justin Trudeau announced that the federal government will soon release a series of guidelines that provinces and territories can follow–taking their unique circumstances into account–when it comes time to reopen their economies.

At the press conference, Trudeau said that updated models showcasing projected case and death rates will be released today (April 28). He also said that while the curve appears to be flattening in many parts of the country, physical distancing measures cannot be safely lifted just yet.

“Were not out of the woods yet, this is the most serious public health emergency the country has ever seen,” he said, adding that Canada cannot afford to lose its progress and must continue to protect the most vulnerable.

Trudeau said that the premiers and federal government are working together to combat the virus and that governments need common guidelines to ensure all leaders are following the best medical and scientific advice.

The prime minister said the government will share the guidelines–which he emphasized are a set of principles–for restarting the country soon.

“It will lay out what needs to happen before we take any next steps,” he said adding that the economy will be rebooted very gradually.

Trudeau said that in order for Canada to begin reopening, provinces and territories will need to be able to roll out robust testing and tracing protocols to control any future outbreaks. Trudeau also said proper safety procedures will need to be in place for people returning to work.

“You’ll see a lot more testing. If someone near you tests positive, you’ll be notified so you can isolate,” he said.

Trudeau also said that hospitals will need to have the capacity to be able to cope with COVID-19 and other, unrelated illnesses and ailments.

He also said that strong measures will need to be in place at long-term care homes and congregate care settings.

“These will be common principles wth respect to restarting the economy. The principles will set out conditions that must be in place before we can lift restrictions,” he explained.

Touching on Canada’s procurement of personal protective equipment, Trudeau said the government will be shipping 6 million masks and 100,000 face shields to the provinces and territories. The face shields were created domestically by Bauer.

Trudeau also revealed that 44,000 businesses have applied for the wage subsidy since applications opened yesterday (April 27).

When asked about whether or not any future COVID-19 vaccine will be mandatory, Trudeau said that a vaccine is “a long way off” and that the government will discuss appropriate protocol when the time comes.

He also said that researchers are working on treatments that could manage the virus, adding that a vaccine might be not guaranteed, as scientists have been unable to produce one for HIV/AIDS.

“Some diseases have no vaccine, such as HIV. There could be treatments that aren’t a vaccine that could help us manage and get back to normal without a vaccine,” he said.

Trudeau reiterated that the government must continue to work to help provinces and territories ramp testing in order for the country to begin its economic recovery.