Justin Trudeau is Coming Back to Mississauga

It's always a big deal when the Prime Minister comes to your community. Either you're a supporter and want a selfie, or you're planning to go protest outside the venue where he's at to air out whatever grievance is on your mind.

Justin Trudeau has been to Mississauga before. Last year, he came to Mississauga City Hall to have a meeting with Mayor Bonnie Crombie and other city officials on issues such as transit, infrastructure and housing.

Well, now that a federal election is only about a year or so away, the Prime Minister is coming back to Mississauga to grace us with his presence. 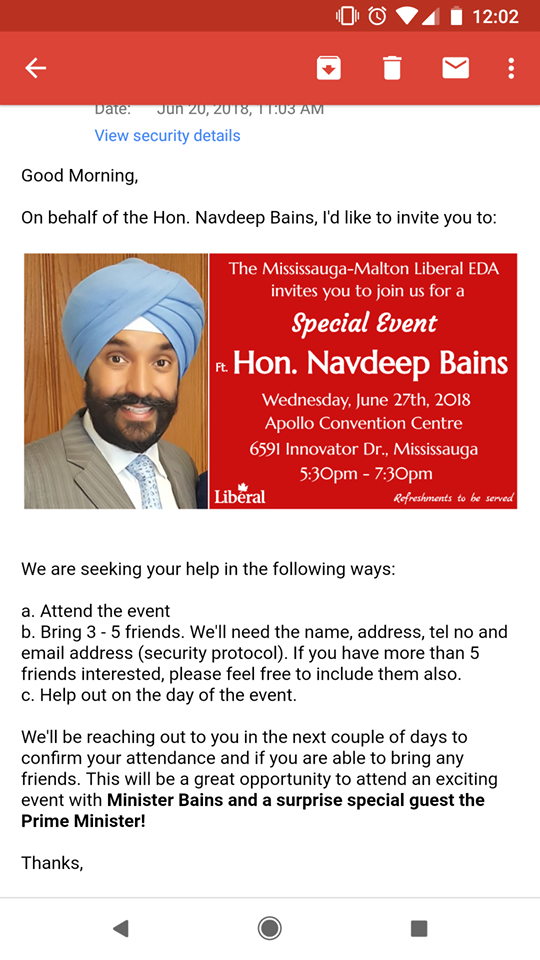 According to a spokesperson from the Mississauga Malton federal Liberal riding association, Trudeau will be in Mississauga on June 27 (next Wednesday) at the Apollo Convention Centre at 6591 Innovator Drive. The event is slated to start at 5:30 pm (so more likely around 6 pm).

Minister of Innovation, Science and Economic Development Navdeep Bains will be in attendance as well along with the Prime Minister. Further according to the spokesperson, this is an open event with no entry fee. Bains is also the federal MP for Mississauga-Malton.

Bains has held similar events before, booking one of the many convention centres around north Mississauga and hosting meet and greets with supporters and well wishers, although I am quite certain that dancing will not be part of the itinerary.

With a federal election scheduled in October 2019, it looks like Trudeau is swinging by the regions that gave him his majority government three years ago to shore up support for the campaign ahead.

So if you want to come see the Prime Minister in Mississauga once again, better book some time next Wednesday after work or whatever occupies your life every day.