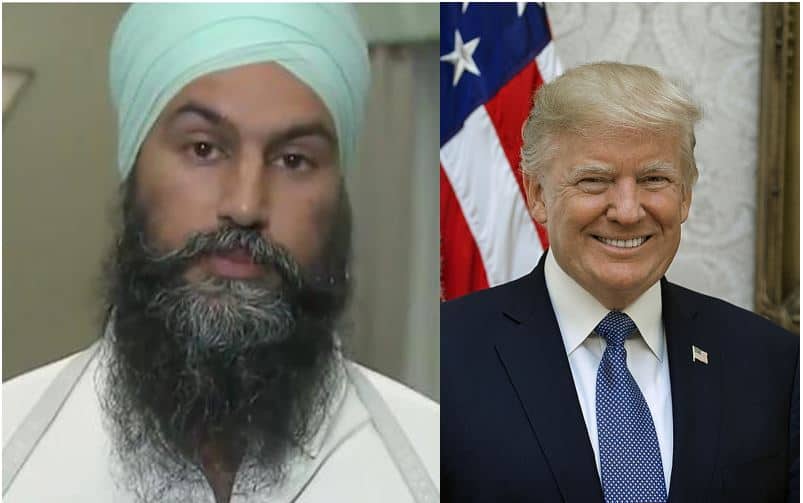 On the campaign trail leading up to the October 21 federal election, at least one party leader has offered his views about the impeachment proceedings launched against US President Donald Trump.

During a town hall in Nanaimo, British Columbia, NDP leader Jagmeet Singh was asked what he would say to Trump if the former Brampton MPP happens to become prime minister.

“I hope he gets impeached before I get to speak to him,” Singh said as the crowd cheered. “I say that a little tongue-in-cheek,” when he was asked by reporters, but he did offer more pointed criticisms.

“It’s disgusting that the president could fan hatred against people and be so divisive. It’s horrible that someone in a position of power like him would allow for kids to be stripped from the arms of their parents, from their moms. This needs to be denounced”.

Singh was referring to the US government’s separation of migrant children from their parents in immigration detention centres at the U.S. Mexico border.

Singh is the first Canadian federal party leader to comment on the impeachment proceedings embroiling the US president since it was revealed that Trump allegedly used a call with new Ukrainian president Volodymyr Zelensky (who was calling to request foreign aid) to ask for help in investigating former vice-president Joe Biden’s son Hunter, who once worked for a Ukrainian gas company.

The elder Biden is a leading contender for the Democratic nomination in 2020.

Neither Liberal leader Justin Trudeau nor Conservative leader Andrew Scheer have commented on the impeachment down south, only taking a wait and see approach.

But the possibility of Trump actually get impeached is not likely given the current political climate. While the opposition Democratic Party controls the House of Representatives, the Republicans control the Senate, where any attempt at impeaching Trump would most certainly be voted down.

While interest in impeachment has skyrocketed in the United States and Canada, the latest political shenanigans in Washington may prove to be more of a distraction than anything else leading up to the American election in 2020.

Trump is more likely to get reelected than Singh would get elected as Canada’s next prime minister.