‘It wasn’t called COVID at the time:’ One year since Canada’s first COVID-19 case 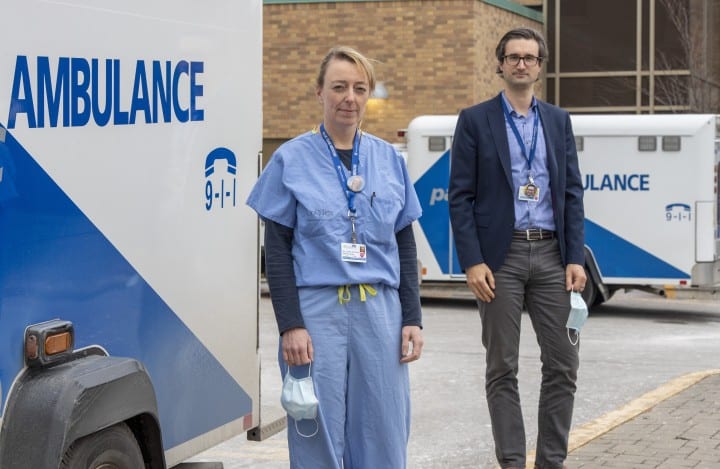 TORONTO — The patient, when he came into the hospital ER with what seemed to be mild pneumonia, wasn’t that sick and might otherwise have been sent home.

Except the man had just returned from China, where a new viral disease was spreading like a brush fire. His chest X-rays were also unusual.

It was the evening of Jan. 23, 2020, when the team at Toronto’s Sunnybrook Health Sciences Centre decided to admit the 56-year-old patient. That same day, Canada’s chief public health officer, Dr. Theresa Tam, told the country:

“The risk of an outbreak in Canada remains low,” Tam said in a refrain she and other officials would repeat for weeks on end.

Less than two days after admission to Sunnybrook, the man would become “Patient Zero” — the first COVID-19 case in Canada.

For several weeks, Leis, the hospital’s medical director of infection prevention and control, had been anticipating just such a moment. He had known since the end of December about the outbreak in Wuhan, China, and he’d been following Chinese authorities as they published information about the new pathogen and its effects.

“We were extremely suspicious that this was the novel coronavirus that had been described,” Leis said. “It does feel like a lifetime ago and yet it does just seem like yesterday.”

“We didn’t know what exactly we were dealing with,” Stroud said. “We had early reports of presentations and how people evolved. We were a bit nervous but we felt very well prepared.”

The following day, as China was locking down Hubei province, Dr. Peter Donnelly, then head of Public Health Ontario, was asked about lockdowns in Canada. “Absolutely not,” he declared: “If a case comes here, and it is probably likely that we will have a case here, it will still be business as normal.”

Confirmation of the clinicians’ suspicions at Sunnybrook would come from the agency’s laboratory, which had been working furiously to develop and validate a suitable test for the novel coronavirus based on information from China. The agency’s lab had been testing samples for two weeks when the Sunnybrook call came in.

“They sent a sample to us in a cab,” said Dr. Vanessa Allen, chief of microbiology and laboratory science at Public Health Ontario.

It would be the start of a round-the-clock effort to test and retest the new samples.

“The last thing you need is a false signal or some kind of misunderstanding,” said Allen, who had been a resident during the SARS outbreak.

By about midday of Saturday, Jan. 25, the lab was sure it had identified the new organism that would soon take over the world and become a household name.

“It wasn’t called COVID at the time,” Allen said of the disease.

Over at Sunnybrook, Leis received the confirmation without much surprise.

“It was consistent with what we were seeing and what we suspected,” he said. “I was actually happy that the lab was able to confirm it.”

Within hours, public health authorities would let the country know that Canada had its first case of the “Wuhan novel coronavirus,” although further confirmation from the National Microbiology Laboratory in Winnipeg was pending.

“I want Ontarians to know that the province is prepared to actively identify, prevent and control the spread of this serious infectious disease in Ontario,” Health Minister Christine Elliott declared as the province announced a new “dedicated web page” for latest information.

The wife of “Patient Zero” would also soon be confirmed as COVID-19 positive but was able to self-isolate at home.

“This (man) was one of the first cases to report on the more milder spectrum of disease, which was not something we were aware of,” Leis said. “It helped to teach us about the larger spectrum in disease severity that we see with COVID-19, which is very different from SARS.”

Looking back now at their roles in a small piece of Canadian pandemic history, those involved talk about how much we didn’t know about a virus that has since infected three-quarters of a million people in Canada, killing more than 18,800 of them.

“The initial detection, in some ways, was the easy part,” Allen says. “This virus and the implications are extremely humbling, and just the prolonged nature and impact of this was certainly not on my radar in January of last year.”

Yet treating “Patient Zero” and his wife afforded valuable lessons about what was then a poorly understood disease. For one thing, it became apparent that most of those afflicted don’t need hospital admission — hugely important given the massive number of infections and resulting stresses on critical-care systems.

“To be honest: We would have sent this patient home from the emergency room,” Stroud says. “We admitted him because, at that time, it wasn’t known very well what the course of illness was.”

Sunnybrook alone has now assessed more than 4,000 COVID-19 patients. To survive the onslaught, the hospital developed a program in which patients are screened and, if possible, sent to self-isolate under remote medical supervision.

Both “Patient Zero” and his wife recovered. Their cases would mark Canada’s first minor health-care skirmish of what was to become an all-out global defensive war against COVID-19. It also marked the beginning of relentless work hours for those on the front lines of health care.

For health-care workers, it’s been a long year since those first energized, if anxious, days one year ago. There’s a weariness in their voices, a recognition the war is still raging, even as vaccines developed with stunning alacrity offer some hope of a truce.

“We have been working essentially non-stop since last January and it’s not slowing down now,” Leis says. “Health-care teams are tired. There’s a lot of concern about burnout. It’s been challenging for sure.”

Despite COVID-19’s deadly toll, the vast majority of COVID-19 patients, like “Patient Zero,” recover. Still, even for some of those, their battle might never be over.

“These people just don’t get magically better,” Stroud says. “Some will have lifelong lung scarring and damage to their lungs.”