“It was nail-biting but we did it”: Canadian shows didn’t let COVID derail production 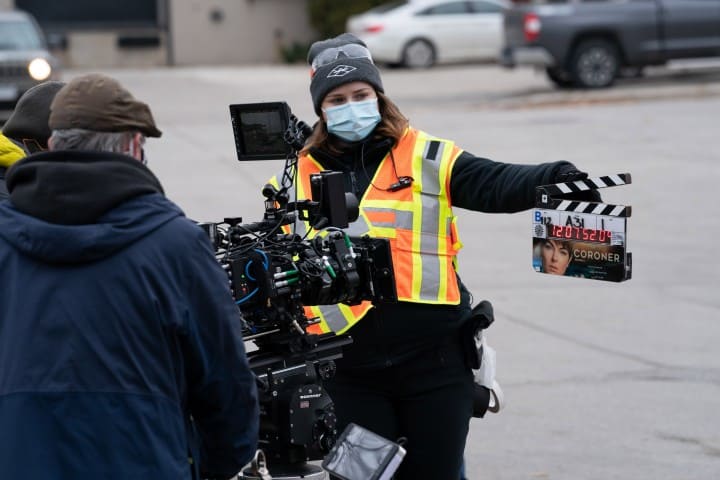 TORONTO — The pandemic has its prints all over Canada’s winter TV season.

While some shows affected by lockdowns last March were able to resume production in the summer and air in the fall, many were held up by restrictions, a lack of COVID-19 insurance, and the development of expensive health and safety protocols with officials and unions.

The result is a January and February slate packed with new programming shot over the past few months with much testing, distancing, sanitization and personal protective equipment.

The Canadian Press spoke with talent behind some Canadian shows about production challenges, and how positive cases were dealt with on set.

“KIM’S CONVENIENCE” ON SHOOTING UNDER DURESS

Star Paul Sun-Hyung Lee, who plays patriarch Appa on the family sitcom, says the pandemic pushed the start of production on the new season in Toronto from last May to September.

Writers modified some storylines and used fewer guest actors, while the whole team was “fastidious” about their COVID protocols.

Away from the set, everyone limited their contact to those in their immediate household, realizing that “like dominoes, if one goes, everything sort of goes.”

“Mission accomplished,” Lee says. “We shot season five under duress, the worst circumstances, but we didn’t have one case, knock on wood.”

Simu Liu, who plays Appa’s son Jung, was in Australia shooting Marvel’s upcoming film “Shang-Chi and the Legend of the Ten Rings” when the pandemic hit and couldn’t get back to Toronto to shoot “Kim’s Convenience” until near the end of production.

The protocols made the shooting process “very piecemeal” and put pressure on the cast to “nail a scene and move on” so they could stay on schedule, Lee says.

“Otherwise, it’s like a big train wreck: one delay at the beginning makes it a mess at the end. So that was really difficult to do.”

Lee cites a host of other challenges, including the safety risk of acting without a mask, and not being able to communicate as well while wearing PPE during rehearsals.

But he was happy to be working and it all made him “appreciate that much more the professionalism and the quality of the crews.”

“Every step of the way, I felt safe,” Lee says. “Personally, I felt safer on set than anywhere else outside of my home.”

Masks are already a common sight on this show about a coroner in Toronto, but even more so in the new season as it’s set during the COVID-19 pandemic.

Showrunner Morwyn Brebner says when the pandemic hit, they’d already done a month’s worth of writing but realized they would have to “reinvent the season” to address the new reality.

“A few of us were really concerned: ‘Will we not have a problem with COVID by the time we start to air it? Will it feel a little bit like old news?’ Ha! Were we wrong,” adds lead director/executive producer Adrienne Mitchell.

The writing team penned the new scripts together via video conferencing, limiting the amount of stand-ins and background performers on set.

Shooting began in the fall with protocols including daily temperature checks and weekly COVID testing. Departments worked different shifts to limit the amount of people in spaces, which made shooting more time-consuming.

Filming took place outside where possible. Actors not in the key cast were distanced from the stars when shooting scenes indoors.

With so much separation on set, scenes of intimacy “felt really significant,” says Brebner.

“You start to shoot a little looser so you can see body language, because body language adds a lot of information,” Mitchell says.

While the production had “a few issues” with COVID-19 cases, “they weren’t on set and they were easily contact-traced,” says Mitchell, noting they didn’t have to shut down. “We have had no community spread, and what we had was very little.”

“HEARTLAND” ON CHANGING THE SCRIPT

Star Amber Marshall says the storylines for the new season of the Alberta-shot family ranch story were already written depicting spring and summer vistas when the pandemic hit.

When filming was pushed from last April to September, writers had to alter scripts to reflect the fall and winter seasons that would be seen onscreen instead.

“There were a lot of things that sprung up on us, even throughout shooting, such as we had certain actors written into certain stories and then they weren’t able to travel (to set),” Marshall says.

“So of course there this mad scramble of, ‘How are we going to continue this story without that character here?’”

The “Heartland” set inherently allows for distancing, since many scenes are filmed outdoors. For indoor shoots, each department was put into a certain “zone” that would only work with each other.

“PRETTY HARD CASES” ON WORKING WITH A SKELETON CREW

Catherine Lang, COVID supervisor for the new buddy-cop series in Toronto, says she and the producers pored over scripts to try to minimize risky contact between actors.

They also checked with the cast on whether they were comfortable in various scenarios, and held daily morning safety meetings with the whole team.

The crew and the cast were “very onside” with their COVID protocols, “because nobody wanted to shut down.”

“We had debriefs with our department heads just last week, and everyone said that they actually felt safer at work than they did out in public,” says Lang.

“We had no incident of anyone contracting COVID-19 in our workplace,” she adds, noting there were two positive cases that were contracted outside production, caught through testing and had no community spread.

Stars Adrienne C. Moore and Meredith MacNeill say the hardest thing was not being able to see people’s faces while putting together a brand-new show, especially crew members, whom they view as their collaborators.

Moore says she tried to have special moments with the crew and express her gratitude to them, while everyone worked as a team.

“In those morning meetings, if there was a problem, if somebody was afraid of something or wanted to do something, no one was afraid to talk about it,” says MacNeill.

Producer Alex Jordan says the pandemic interrupted the prep period for season 4 of the private-detective show in March and they couldn’t start production until August.

Filming took place in studio for the first couple of weeks to ensure protocols were solid before shooting outside, which was limited to as many single locations as possible and with fewer background performers.

Each department was podded together and had their own bathrooms. Town hall meetings took place in a parking lot.

“Our COVID team grew from a handful to a small army,” Jordan says, rhyming off a long list of team members specifically dedicated to the protocols, including two medics.

The stars and crew who worked directly with actors were known as “the red zone” and tested for COVID more frequently.

“Through the testing we caught five positives, but we had no community spread and none reached the floor (of production),” Jordan says, noting they suspected two of the positive cases were a result of viral shedding from people who’d had COVID a while ago and had been cleared by government to return to work.

Insurance-wise, “Private Eyes” was considered an “at-risk production,” meaning if the show had to shut down, all of those costs would have been on production company eOne.

“Entertainment One was very nervous, I was stressed out for the entire shoot until the very last day,” Jordan says. “It was probably the hardest thing I’ve ever done.”

But they “had zero shutdowns” during the whole production, he adds.

“It was nail-biting but we did it.”