Is the School Board Dictating Muslim Prayers in Mississauga? 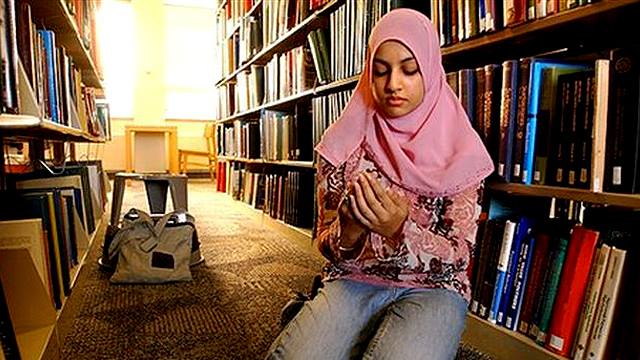 Whatever your religious faith is and how you choose to pray, such an intimate act should be conveyed in words that come from your own heart. You might need some guidance in terms of phrasing things the right way, but ultimately they should be your words and your words alone.

So it is rather odd to hear the Peel District School Board is issuing out pre-scripted prayers for Muslim students. Parents and students are asking why schools are using their time to seemingly police their students’ religious beliefs?

As this CBC reported last week, Muslim students in Peel District schools have been praying using a script given to them by their teachers. When I asked a Muslim friend about this story, he explained that there is a part of the prayer that is required in a congregational part of the main prayer of the week, which is on Fridays. The students who are involved in prayers were provided a script by their principals outlining six versions they can use, but they have to read it word for word otherwise they aren’t allowed to pray. At that point in time, their principals would not tell them where it came from or who wrote them.

Later, when these students and parents obtained a legal opinion that this is unconstitutional because it violates Charter rights regarding freedom of religion, they were told there is a group of faith leaders who developed them (imams, as they are referred to). As Mississauga School Board trustee Nokha Dakroub told me, this policy was passed by the PDSB without any actual public consultation.

Trustee Dakroub raised the issue last week during the regular board meeting. She was also interviewed last week on AM 640 with John Oakley (see below)

And here is a short video some students making deputations on the pre-scripted prayer policy made in front of the trustees at the same meeting last week:

Proponents said that most of the pre-scripted prayers contained general themes around respecting your parents, being good in the community and being good citizens. Nobody is arguing against that; but should that be in the purview of school board administrators, even if they are working with religious leaders from the Muslim faith?

Why does it seem that it is only the Muslim students getting this specific treatment and not other faiths within the Peel District School system? It looks on the surface like a double standard, even bordering on Islamophobia.

The PDSB’s Education Director Tony Pontes announced during the board meeting that this practice will be suspended and students can write their own sermons, provided they are submitted to their principal for approval on Mondays. This will be done until a solution is reached.

Hopefully, a solution can be reached that respects religious freedom and reflects the values and principles of Peel District schools.