Is the Brampton LRT Going Off the Rails? 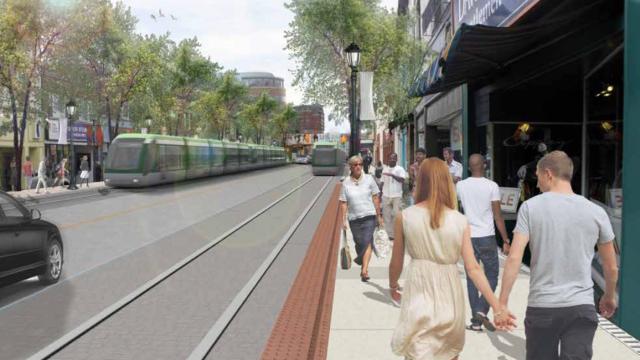 Its seems no matter who is taking office to run Canada’s ninth largest city come this December, the topic of the LRT is still going to be a prevalent issue going forward.

Its seems no matter who is taking office to run Canada’s ninth largest city come this December, the topic of the LRT is still going to be a prevalent issue going forward.

Despite the route currently slated to run up Hurontario and stopping at Steeles Avenue, never mind a Doug Ford led PC provincial government that is less likely to feel obligated to dole out money for additional LRT construction, let alone on any transit project, Brampton residents still want some kind of LRT connection to the city’s struggling downtown core.

Bramptonians have begun studying alternate LRT routes earlier this year, mainly focused on whether the LRT can continue past Steeles along Kennedy or McLaughlin Road. But despite the Main Street option taken off the table by council back in 2015, some residents were adamant that it was the ‘perfect route’ and that reconsideration should be made. 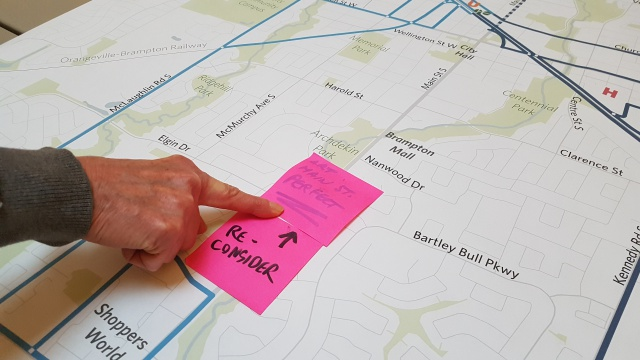 However, in the much talked about Vision 2040 document, one of the main proposals is to have a “Figure 8 Loop” to connect the Uptown as well as downtown of Brampton, helping to “spur growth at key desirable locations.”

In a longer term of 25 years, Vision 2040 says this Figure 8 Loop is sensible, with or without reinforcing links because the dual core is where Brampton should focus its major growth. 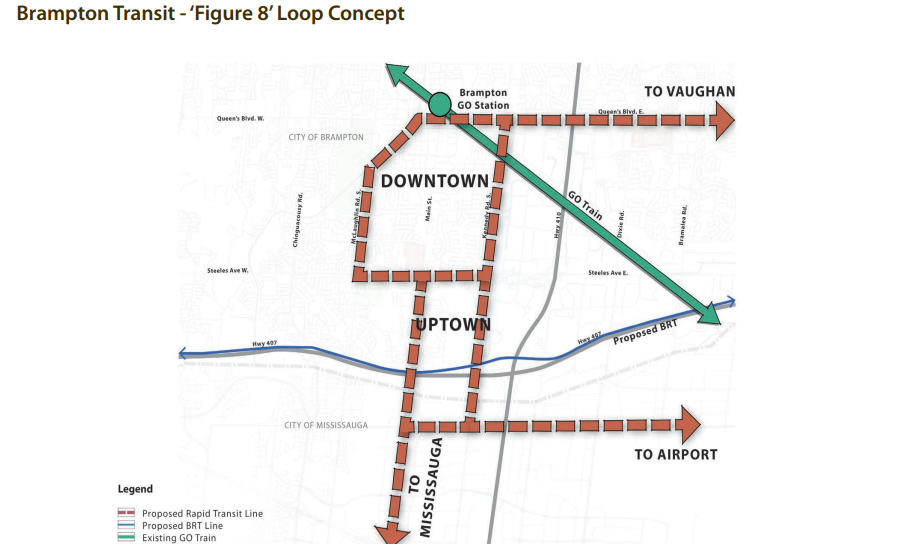 During the municipal campaign at a debate, Brampton’s now outgoing mayor Linda Jeffrey and her main challenger Patrick Brown sparred on differing visions of a future LRT route.

Jeffrey was not enthused about the Figure 8 loop because she saw the traffic and ridership being along Main Street, which is what the experts and planners have said. “At this point, we don’t have any commitment from (the Ford government) on a route beyond Steeles, so it would be foolish to commit to a route that isn’t funded.”

The outgoing mayor also said she would take the $4.4 million the city is currently spending on the Environmental Assessments along the parallel routes of Kennedy and McLaughlin as it would be wasted because of that lack of commitment of provincial funding. Jeffrey has even said the LRT should go up Hurontario/Main to as far as Mayfield Road.

Brown said he supported the Vision 2040 plan and backing out of the EA’s would mean abandoning that vision. He also questioned why Brampton seemed to be settling for ‘scraps’ in comparison to Scarborough and Vaughan where ‘subways were getting built or have been built.’

Ironically this is a rather passing strange response to a question about the LRT, considering the majority of Brampton councillors that decided in 2015 to settle for said ‘scraps’ by rejecting the fully funded LRT supported Brown in the election.

Inbrampton.com reached out to Brown to see if he had anything new to add about future plans for the LRT but he has not responded as of this writing.

However, another caveat has emerged that is creating concern for some: that the Ford government may just end up cancelling the Hurontario LRT altogether.

Ontario NDP transit critic Jessica Bell issued this statement after a meeting with transit ministry officials, as well as asking a question to the municipal affairs minister.

NDP critic for Transit, @JessicaBellTO, issued the following statement after Doug Ford’s govt refused to commit to keeping their promise to deliver the Hurontario LRT to #Mississauga and GO Electrification to Ontario: https://t.co/1TZIvHLZaM #onpoli #gotransit pic.twitter.com/1ofmEBdJ9L

Inbrampton.com reached out to the government and a spokesperson for Transportation Minister Jeff Yurek provided this statement:

“Our government is committed to improving the transit experience across the GTHA to get people moving and make life easier for Ontarians. We are determined to deliver a modern transit system that will serve the region’s growing communities, drive economic development and alleviate traffic congestion. We have to eliminate the inefficiencies of the previous Liberal government and make sure we invest in efficient and effective transit projects that achieve the best value for our customer – the Ontario taxpayer. Our decisions will be based on what is best for the people of the GTHA, including Peel Region.”

If Ford cancels the Hurontario LRT, surprisingly it may not affect Brampton as much as cancelling the university funding has been seen to be. However, it would affect neighbouring Mississauga and set the city back a good 20 years.

As this new council convenes in December, and a provincial government looming in the background with a perchance for spending cuts, it will be interesting to see what happens with thte Hurontario LRT file. What happens in these next few months could set the tone for transit development in Brampton and beyond.

Will the LRT go off the rails…or find a way to ‘get back on track’?