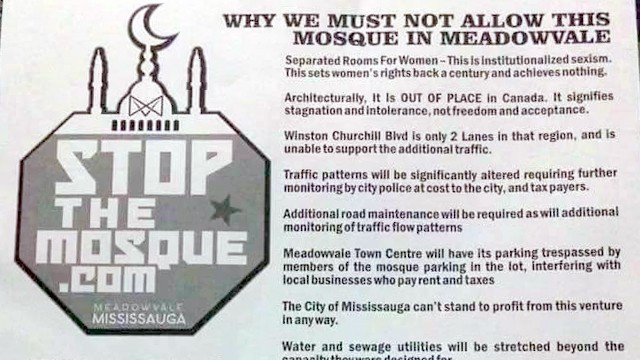 Have you all been following the heated Meadowvale Islamic Centre debate?

If you haven’t heard about it until now, we’ll break it down for you.

For those who are not aware, City Council recently approved an application to build a hotly debated Islamic Centre in Meadowvale on Winston Churchill near Meadowvale Town Centre. The application had been pending a whopping 13 years, with opposition citing parking, traffic and aesthetic concerns.

While those issues seem ho-hum and generic, it’s interesting that, according to the Mississauga News, the Sept. 21 debate was packed to the rafters and overflowed Council Chambers, necessitating a spread to nearby committee rooms where people could watch the proceedings on TV.

In terms of housekeeping, The News article says that basic aesthetic and parking concerns were addressed by the project’s operators.

In fact, if you’re link-phobic, here are the relevant passages in The News’ article:

The two-storey building will be 9.5 metres tall, not counting the minaret and dome. Staff have determined there will be no shadowing from the dome or minaret on neighbouring buildings.

Increased traffic is one of the most frequent concerns from those against the project use when speaking against it. However, according to staff, “significant” traffic isn’t anticipated and that Winston Churchill Boulevard should be able to accommodate the cars heading into and out of the centre.

Parking, or a lack thereof at the site, was also raised numerous times by residents as a reason to turn down the application. However, the centre will have 115 parking spaces, one more than what’s required by the municipality.

Staff did determine that, during peak periods on Friday afternoon for prayer sessions, the demand may outnumber the available parking spots. Peak parking demand is usually for about 30 minutes on Friday afternoons. A few ways to solve the issue were proposed in the report, including on-street parking, increasing the number of prayer sessions and sharing parking with another nearby facility, among others.

Glen Broll, a partner with Glen Schnarr and Associates, the legal representation for the Islamic centre, told councillors that his clients have entered into an agreement with the nearby Meadowvale West Church Centre to accommodate the overflow parking.

The location of the proposed centre, near homes, isn’t out of the ordinary, according to the report.”

Opposition to this mosque has been fraught with emotion. In fact, a Meadowvale resident named Cheryl Pounder tearfully insisted that while everyone deserves a place to worship, the community is simply not the right fit.

You can see that video, courtesy of the CBC, here.

If you’re still link-phobic, I must insist that you cast aside your fear and watch the video. Another interesting part (besides the literal tears over alleged, like, parking concerns) is the presence of former mayoral candidate and Stop the Mosque.com founder Kevin “Jackal” Johnston. Well, since Johnson founded Stop the Mosque, his presence isn’t exactly mysterious or unexpected.

Johnston has been rallying against the project for some time, citing concerns about institutionalized sexism, “out of place” architecture, traffic, road maintenance, parking, lack of revenue generation, water and sewage, intrusiveness, resident’s personal and mental well-being being affected by a tall building, noise pollution, vandalism and a “Canadian Cultural Hole.”

Here’s the flyer, which CBC confirmed he’s taken responsibility for: In terms of Johnston, his rallying cry — though powerful if only for its persistence — is tempered by what appears to be an irrelevant insistence that Mayor Bonnie Crombie (who voted in favor of the centre) has a personal vendetta against him and therefore tried to “embarrass him” at the meeting.

According to Johnston on stopthemosque.com, Crombie allegedly showed him a “binder full of unsubstantiated ‘dirt’” on former mayoral candidate Steve Mahoney during the 2014 election. Johnston alleges that Crombie said Mahoney was “sexist” and “condescending” and that his experience with Mahoney was nothing but pleasant and that he discussed Crombie’s alleged statements with the runner-up candidate.

While we have no reason to believe Johnston has a poor relationship with Mahoney now, we do know that they, too, had words during the heated mayoral race. In fact, we have a word-for-word transcript of a raucous argument that went down between the two men during the Arts, Culture and Heritage Debate last September.

To be fair, political debates can be robust and it’s possible that the argument over Johnston’s alleged legally dubious recording of a junior member of Mahoney’s campaign (among other things) is now water under the bridge. That said, the fact remains that the former candidates didn’t always have a rosy comradery.

It’s also puzzling that Johnston is bringing up Crombie’s alleged “beef” with him at all. How is it relevant? Does he think she voted in favor of the mosque to get back at him? Does he think she’s trying to thwart his mission out of spite? The attachment of a supposed vendetta to what is supposed to be a campaign against an inappropriately placed building is curious indeed.

But onto the greater crux of the issue.

While it’s easy to be shocked by the not-so-veiled Islamaphobia behind the flyers (I simply can’t buy that a building taller than two-stories will affect the mental and personal well-being of residents, I just can’t), it’s not entirely surprising.

Johnston, though particularly outspoken, is not alone in his fight to stop the centre from being built. If he was, the council meeting wouldn’t have flowed into surrounding rooms and Councillor Pat Saito wouldn’t have insisted that the centre’s board of director’s president Amir Syed is essentially not “living in harmony with his neighbours.”

Saito is not speaking alone, she is speaking for members of the community — a community where people are in tears over the very idea of this mosque.

It’s important to ask ourselves if we would be this upset over a synagogue or a church.

Opponents argue that the look of the building will clash with surrounding structures, but is that truly fueling all of this rage? You could argue that the Fo Guang Shan Temple of Toronto (a Buddhist temple on Millcreek Drive in Mississauga) is also out of step with surrounding buildings, but we haven’t heard much about a raucous debate as to whether or not its construction was appropriate.

Johnston’s flyer mentions gender-segregated rooms in the centre. While it’s important to address culturally and spiritually-ingrained sexism, it’s important that sexism be discussed for the right reasons.

Are Johnston and his supporters mentioning gender-based concerns because they’re invested in the fight for female equality? Or is it an easy issue to latch onto to whip the community into a panic?

There is a time and place to discuss Islam (and religion in general) and some practitioner’s treatment of vulnerable people and women in particular. There is also a time to reach out and build a greater, stronger and more integrated community by allowing people to worship in their neighbourhoods without howling behind “water and sewage” and “tall buildings hurt people’s feelings” smokescreens.

According to this Stats Can study on how new immigrants feel about Canada, the news is pretty good.

Most immigrants feel welcome and safe and admire the rights, safety and security the country offers (and a lot hate the weather, but so do most locals). This feeling of safety has kept Canada out of most of the racial and ethnic quagmires that have plagued Europe. By sharing our space — and our values — we create a stronger and more unified Canada (and Mississauga). We need to refrain from drawing hard “us vs. them” lines in the sand, fueling conflict and distrust and emboldening each side’s resolve to set themselves apart from supposed opponents or enemies.

The votes have been cast the centre is, at this point, set to be built.

It’s time for all of us to be good neighbours.