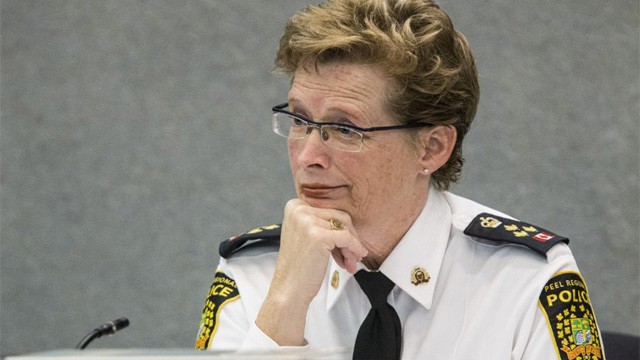 Disclaimer: The views expressed in this article belong to the author and do not necessarily represent the views of insauga.com and its staff.

I have not always been an ardent follower of issues related to Peel Regional Police and the Peel Police Board. The more salacious news about police matters these past few years has usually come out of Toronto and revolved around the controversies surrounding carding (for some reason Peel Regional Police call them ‘street checks’ within their jurisdiction).

When Jennifer Evans was appointed in 2012, it seemed like a progressive move. She was the first woman appointed to lead the second largest police force in Ontario (third largest in Canada). But when you’re from Mississauga (where we’ve had female mayors for almost 40 years), a woman in a position of leadership feels very natural.

So when you hear calls for her resignation it may seem surprising to many of you, but recently people have been speaking up.

Two recent public meetings in Brampton and Mississauga hosted by Justice Michael Tulloch, who was appointed by the provincial government to head a review of Ontario’s police oversight bodies, showed the latest tensions between the public and police brass that began last fall. One man, when giving his comments at the microphone, compared Peel’s police-public relations to what he experienced growing up in northern Alabama, and from what he has seen, he didn’t believe Chief Evans was interested in changing the police culture or stopping carding.

Also in attendance at the Brampton meeting was Brampton Mayor Linda Jeffrey, who sits on the Peel Police Services Board. While Mayor Jeffrey was not calling for the Chief to resign, she did say, “I’m not here to keep the seat warm. I believe some policies at Peel Region Police need a refresh and a new set of eyes looking at them. And that’s become evident over the last couple of years.”

Not exactly a ringing endorsement of the performance of the incumbent leadership. Also, take a look at the video from Justice Tulloch giving an answer as to why the chief did not attend a recent public meeting on police oversight review at the Meadowvale Community Centre.

The reason the Justice cited was that Chief Evans herself was becoming a topic of discussion, specifically how she has continued to stand by policy that was discriminatory (and amid growing calls for her to resign). And this is interesting; people felt that ‘a strong police presence in the room may taint the opinions expressed by the public’. In layman’s terms, people thought they would feel too intimidated to speak freely if a powerful authority figure in charge of enforcing the law was present.

I have written about issues surrounding Peel Regional Police policy and leadership. The following is a summation of developments this past year that I believe have now led to voices calling for Chief Evans’ resignation.

In my own personal opinion (not Insauga’s; my own opinion), I think it would be best if Chief Jennifer Evans resigned from leading Peel Regional Police. And this is my view and my view alone.

No one person is infallible, and certainly no one institution is infallible. Peel Regional Police is the third largest police force in Canada, so it would be important to get reforms done right or even actually done, and it doesn’t seem like it’s happening under the current regime.

However, having Chief Evans resign from her position isn’t the one solution that will magically solve all the problems. But if the public she is tasked to serve no longer trusts her, then perhaps it’s time for a change in leadership. Only by having some fresh eyes and different thinking could Peel Regional Police actually look to directing themselves to reform and provide better and more accountable policing.