Is Brampton the Warehouse Capital of Canada? 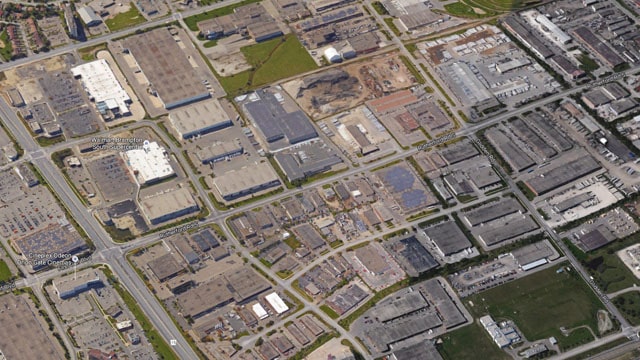 The city of Brampton’s Planning and Development Committee recently dealt with a planning application to expand the Benson Hedges buildings into an industrial warehouse with 92 bay loading doors and parking for about 72 transport trailers. Just a few months ago, Amazon opened a brand new, state-of-the-art distribution centre in Brampton that will employ 350 people, and they even had Prime Minister Justin Trudeau attend the opening ceremony with much fanfare.

If you’ve ever taken Highway 410 going into Brampton, you might notice that Canada’s ninth largest city seems to be beset by industrial buildings. Take a look at the cover photo. This is around Kennedy and Steeles just west of the 410; it’s dotted with gray industrial buildings as far as the eye can see. I’ve worked at an office near Pearson International Airport, very close to south Brampton, and every day my commute consisted of sharing road space with massive 18 wheeled freighters and other large trucks on their way to pick up or drop off cargo from areas such as this.

Which begs the question–is Brampton the warehousing/logistics capital of Canada? Does Brampton indeed have the most warehouses of all other cities of comparable size?

Throw in Brampton’s proximity to Pearson Airport, access to Highway 401 and ample amounts of land already zoned for industrial use, and you’ve got a city that has the factors that would incentivize any company to set up a warehouse in Brampton. The numbers don’t lie. Here is a list of Brampton’s top employers from the city’s website. Canadian Tire, Coca-Cola Bottling Co., Best Buy, the aforementioned Amazon as well as various other minor distribution centres and warehouses all make their home in Brampton.

But is there more done to Brampton than sprawl and warehouse properties? Like Mississauga, Brampton was also the poster child of suburban sprawl during the last few decades, resulting in the way it is now. The difference seems to be that Mississauga’s economy managed to diversify beyond manufacturing and warehouse redistribution. Reliance on the airport for providing a base for the economy is not as evident in Mississauga as it is in Brampton.

It’s very hard to try building the future Brampton when you have this land that is industrial zoned; how much use for these buildings could there possibly be? How many Archery Terminals or Escape Rooms can you possibly have as alternatives to warehouses? The challenges of building a complete city in Brampton are omnipresent and should be taken into consideration by Brampton’s leaders for the sake of Brampton’s citizens.