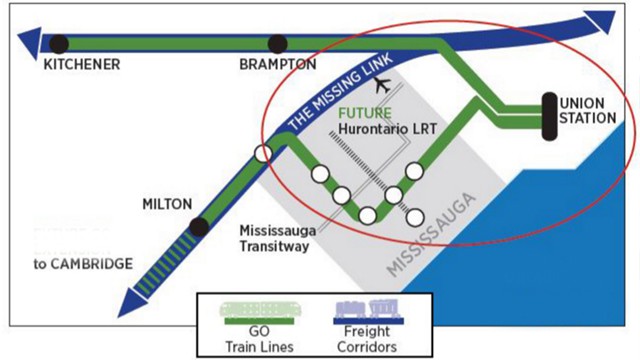 Last year, Mississauga City Council launched a study on a project called ‘The Missing Link’. To her credit, Mayor Crombie took the initiative to bring together other mayors from Brampton, Cambridge, Guelph, Kitchener-Waterloo, Milton and Toronto to present a united front advocating for funding from the provincial government, and it looks like Queen’s Park is listening and likes what they’re hearing.

But what exactly is this ‘Missing Link’ that Crombie and others have been talking about? It just so happens that Insauga mentioned it last fall, as Mississauga’s council endorsed studying the idea. That idea is rather simple: move large freight traffic off the main train tracks that service the Milton and Kitchener GO lines and free up the tracks to allow the implementation of Regional Express Rail (RER), effectively turning them into all-day, two way commuter rail, as well as allow electrification and future additional station expansion (as mentioned in a previous article).

The illustrated infographic below was pulled from the city of Mississauga’s website and details the initiative. Assume that the portion marked ‘The Missing Link’ is not built yet (which it isn’t). That means current freight trains from CN rail are using the Milton line during non-rush hours during the day in order to reach west through the Cambridge area and beyond.

Some of you might wonder how the Lakeshore line is allowing both types of trains to traverse across right now. It’s because on Lakeshore, they widened the tracks to accommodate both train types along the corridor, hence why Lakeshore GO can operate as an all day, two way service.

I used to take the Milton line to work for a number of years, and my own personal observation is that to put an additional length of track for freight trains to run alongside commuter trains is not feasible due to lack of space, and the years it would take on construction would be horrendous for the average commuter. In short, as Crombie likes saying, the business case just wouldn’t be there. Therefore, building a linkage between tracks more north of the city that service freight trains makes more sense.

I also recently spoke to an experienced transit expert, and he told me the idea for this type of separation of freight traffic from commuter rail dates back almost 40 years ago, to around 1969.

As a Mississauga resident you must wonder: why in a heavily urbanized city like ours do we still have heavy freight moving through our populated neighbourhoods?

Did we not learn the lessons of 1979, when a train did derail and 200,000 people had to be evacuated from Mississauga? And if I’m dating myself a bit here; look no further than Lac-Mégantic, Quebec. ‘The Missing Link’ should have happened years ago.

So where is ‘The Missing Link’ currently at now? The Ontario government recently announced that an agreement in principle has been reached to build a new freight corridor between Kitchener and Toronto.

Specifically when it comes to the Kitchener GO line, that means CN will be able to move most of its freight traffic from its current section of the Kitchener corridor – between Georgetown and Bramalea – to the new line, freeing up capacity for more GO service from Brampton through to Kitchener.

In terms of how this announcement specifically affects Mississauga, a concrete example of separating commuter and freight would bolster the business case for ‘The Missing Link’, and it would also help the Malton GO station in terms of enhancing that location along the corridor and making Malton a major transportation hub, as outlined in the ‘Mississauga Moves’ plan from Crombie.

Mississauga city council has emphasized making the business case for this initiative in order to get the approved funding. But frankly, if we’re talking about moving freight traffic from CN Rail then there is no question that the federal government needs to make ‘The Missing Link’ a priority infrastructure investment.

To be frank, this issue affects more than just Mississauga, the GTA and its surrounding areas; it’s a national issue, and I think the federal government should actually put a larger amount of money into this project for the sake of not only our economy by making sure people have alternative means besides automobiles for transit, but for ensuring the safety of Canadians.