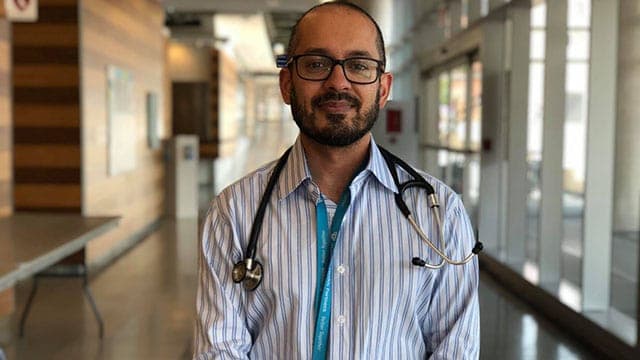 It seems like there’s no such thing as good news when it comes to COVID-19 in Ontario and the “buts” and “we’ll see’s” and other caveats that tend to accompany statements about increasing vaccinations are concerning one infectious disease specialist who believes that, yes, the worst is probably behind us.

On June 3, Ontario reported 870 new cases of COVID-19 in the province, with 167 new cases in Peel (Brampton, Mississauga and Caledon). That 870 number is down from 1,135 a week ago and other important metrics are also changing for the better–especially vaccination numbers.

But despite the fact that 150,884 jabs were recorded on June 2 (9,493,005 total doses have been administered in Ontario as of June 3, with Peel having administered over 1 million shots alone), the dark cloud that has hovered over Ontario has yet to lift because a new threat has been dominating discussions: The Delta variant.

Will the vaccines work?

“The variant discussion has been flawed from the very beginning. Obviously, it’s important [to discuss variants], but this is direct-to-consumer advertising to the public [is flawed],” says Dr. Sumon Chakrabarti, an infectious disease specialist at Trillium Health Partners in Mississauga.

“When you talk about a virus mutating, people think of the X-Men and think the virus is turning into a powerful, dangerous thing. But scientists expected this to happen and not all mutations are beneficial to the virus. We’re seeing this now because we can detect it now.”

When talking about the Delta (B1617) variant first discovered in India, Chakrabarti is careful to say that, yes, the variant should be watched carefully and proactively fought with a robust vaccine rollout.

That said, he believes that medical experts owe it to Ontario residents to be clear about just how miraculous vaccines are and how we are not in the same position we were several months ago when the third wave–driven by the Alpha or B117 variant that was first discovered in the UK–took the province by surprise.

Now that about 67 per cent of Ontarians aged 12 and older have received at least one dose (as of June 2), Chakrabarti says the situation is different.

“Yes, there could be growth [with the Delta variant] but if the baseline level for cases is low, the growth doesn’t mean as much. Yes, you have to pay attention to it, but it won’t cause a massive problem necessarily. The third wave kind of took us by surprise because our population wasn’t covered by the vaccine,” he says.

“With B1617, you’re seeing pockets [of spread] happening in unvaccinated people but the situation is different from six months ago because the virus won’t have that same opportunity to explode because so many people have immunity.”

Concern over the spread of the Delta variant began after the UK, which is further along in its vaccination campaign than Canada, began seeing an uptick in cases connected to B1617. Reports from the region also suggest that just one dose of a two-dose vaccine offers limited protection against the variant.

But while reports suggest one dose (at this point, only 6.5 per cent of Ontarians are fully vaccinated) is only 33 per cent effective against the variant, Chakrabarti says the number doesn’t tell the whole story.

“The 33 per cent thing is something I’m skeptical of. A first dose is almost full protection and a second dose fortifies it. Of those [vaccinated people who got infected], did those people have a sore throat or were they hospitalized?”

“Are people getting symptoms or being hospitalized and dying? The 33 per cent number hasn’t really caused us to be alarmed because it probably means a lot of people got fevers and sore throats and that was it. Yes, we’re going to see pockets of rising cases but that doesn’t mean we have to go back into lockdown,” he says.

Chakrabarti is concerned that health experts are underselling the vaccine by constantly adding caveats about its effectiveness.

“At first we were saying the rollout was too slow and now we’re saying ‘it’s just one dose’ and it’s eroding what is actually a miraculous intervention. No one ever said the vaccines would bring COVID cases down to zero. If you look at what’s happening in Isreal and the UK, we expect to see small flareups here and there but they will be naturally different with vaccine and a flareup does not mean we have to lock down the community.  We don’t close down the community for flareups of flu or measles.”

Should raw case numbers still cause us to worry?

Chakrabarti says that discussions in Ontario have steadily shifted from the importance of preventing hospitalizations and deaths to preventing each and every case of COVID-19–something he does not believe is feasible.

“A lot of discussions have been framed incorrectly from the beginning. People are still not completely understanding why we’re doing what we’re doing because the narrative from public health has been ‘stop spread at all cost’ and that’s not the right approach.”

Chakrabarti, who has also been a strong critic of shame and fear-based messaging–especially when wielded by medical professionals on social media and in mainstream publications–says dire warnings about the 33 per cent statistic in the UK could sow doubt about the efficacy of vaccines at a time when encouraging people to get their first and second shots is critical.

“People say we only have one dose of protection as though it’s nothing but even if it’s not 90 per cent or even if it is just 33 per cent for the sake of argument, that’s huge on a population level,” he says.

“Flu vaccines that keep us from having to shut down a community are usually less than that. Flu vaccine efficacy can be as low as 10 per cent or as high as 60-70 per cent and coverage of flu vaccines is nothing compared to COVID-19 vaccine coverage right now.”

Chakrabarti says it’s time to steer the conversation away from raw day-to-day case numbers and back to severe disease outcomes.

“When you look at data closely with all variants you will see that the vaccine keeps you out of the hospital,” he says.

Chakrabarti says some people are extremely fearful of getting even a mild case of COVID-19, citing the possibility of long-term effects. But while there have been numerous reports of lingering symptoms (generally referred to as “long COVID”), Chakrabarti says not much is known about “long haul” disease.

“If you talk about long COVID, we haven’t yet well characterized what long COVID is and it’s important to study. Thankfully it looks to be fairly rare and most people recover fully from Covid.,” he says.

Does shaming “rulebreakers” help or hurt the health care system?

Another aspect of the medical messaging that Chakrabarti has taken issue with–especially on social media–over the course of the pandemic is the reliance on fear- or shame-based statements.

“We know that abstinence-based and shame-based messaging doesn’t go far. Fear-based goes further, but it has diminishing returns,” he says, adding that he found it perplexing when public health officials started focusing on serious (but rare) cases in younger people.

“Last summer, we talked about how young people could get sick and die and some public health officials would talk about young people on ventilators. This made people want to get rid of COVID and get rid of every case. I was pushing later on for a risk-mitigation approach,” he says.

Chakrabarti says that when people in charge begin to moralize, they tend to lose public buy-in and pit people against each other.

“There was a lot of moralizing and if someone was doing something quote-unquote ‘fun,’ they got raked over the coals for it–even if it was relatively safe,” he says, referring to panicked articles and social media posts condemning people who gathered in parks in 2020 or lined up at stores that the government permitted to reopen before the third wave.

“Thirty people skating in a park in the winter, the risk of transmission is almost zero but it was vilified. If people hide indoors, that’s much riskier.”

Chakrabarti also says that most of the severely ill patients he saw picked up the virus at work or home.

“I didn’t see a single person in a Homesense lineup or who went skating who ended up in hospital. People in the hospital had prolonged exposure in an indoor setting like work or home.”

Is Ontario’s reopening plan too cautious?

As for the province’s reopening plan–which is tentatively slated to begin the week of June 14–Chakrabarti says it’s too cautious given Ontario’s vaccine coverage.

“What everybody is worried about is cases blasting open again like what happened in the third wave. I understand that but what’s not coming out is that we’ve undersold the vaccines. With 70 per cent coverage with vaccines that are 90 per cent effective against [hospitalization], I’d think people would be jumping up and down.”

Chakrabarti says that patios and capacity-restricted non-essential retail stores should be open now.

“Stage 1 is happening on June 14 and I’m not sure why. That’s stuff we should have opened anyways–low-risk retail, outdoor sports, that should be open now. Stuff in Stage 2 is way too late. It’s people being way too cautious. Stage 3 still has restrictions and if you look at other reopening plans, such as BC and Alberta, they talk about having a complete reopening. This might be an initial framework that might be significantly tweaked,” he says.

While Chakrabarti has been vocal about the need to watch the new variant and emphasize the importance of getting second doses into arms as quickly as possible, he says that it’s time to focus on the positives and reassure people that life will be normal again.

“What we need in Canada is to get back on the road to moving on with our lives. You can talk about the amazingness of vaccines without adding the caveat about what could happen. Let scientists, doctors and epidemiologists worry about variants,” he says.

This article has been updated to clarify comments about long COVID