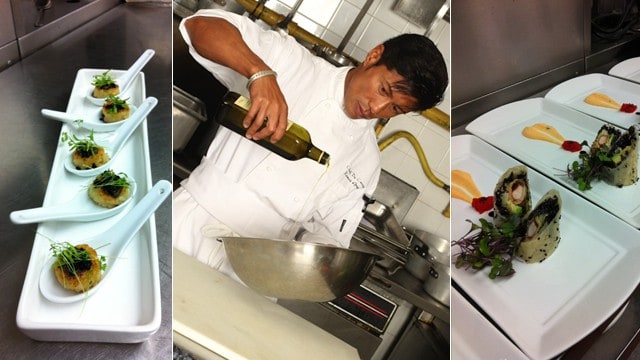 The insauga inChef Series is a new addition to insauga.com which will profile the culinary talent we have in the city we love – Mississauga.

Griarte is unlike any Chef that I’ve met, since he looks like he walked out of Men’s Health Magazine, which makes total sense since he has been a Pro-Fitness model, has competed in body building competitions and continues to contribute to the health and fitness scene in Toronto and the U.S. – something that he has done for the past four years.

He went to high school at Mississauga’s T.L. Kennedy, which is located in central Mississauga, and he loves that the city has a lot of small communities like Streetsville “and places like Celebration Square where people gather together to watch movies or watch concerts that are free.”

I sat down with Griarte for a couple of hours and learned how he manages a busy schedule while maintaining his sanity.

What was the very first thing you cooked?
I started cooking when I was very young and the first thing I ever cooked was a stir-fry, when I was six (years old).

What moment in time was the turning point when you realized that being a Chef was your calling?
I realized that I was really bad at everything else and…no, I’m kidding. When did I realize it? Hmm, it sounds like a big cliché but I liked art and I was very creative. I took drawing, painting and anything (to do with) art, I took. So I figured I didn’t want to be a starving artist, and I can’t be a starving artist if I am a Chef. My food is my paint and my actual plate is my canvas. That way I can actually create artistic work on a plate.

Who are your culinary inspirations?
Wolfgang Puck, Charlie Trotter, and Susur Lee.

Who is someone you’d love to cook a meal for?
My mom, because she’s never gone to any of my hotels, restaurants, country clubs, cruise lines, or any place I’ve ever worked at. She thinks that if I take her to a restaurant and feed her that I might get in trouble because she’s not paying. She doesn’t believe in that kind of stuff so that’s why she doesn’t go to any of my restaurants. And she also feels my food is too fancy for her.

What’s your favourite dish to make and why?
My favourite dish that I like to cook is anything healthy and anything a little bit different. My mother always told me don’t play with your food, but this is exactly what I get paid for. I like to take different types of cuisines and marry them together. I like to take a healthier approach to things. It’s all about a healthy lifestyle. The aging majority of Generation X and the baby boomers are looking for that fountain of youth. And it’s always there. All they have to do is look at what they are eating and take that cuisine and make it healthier. You can still make healthy food taste and look good and that’s the difference between my food and everyone else’s food.

You are a very busy man! How do you manage being a full-time chef, body builder and tv personality on 3D Chef, BodyFuel etc.
I actually have 5 clones of myself that I utilize at different places. So I can be in all places at once (laughter). I wish that was true, but unfortunately, it’s not and I try to manage myself just like anybody else does. I look at everything as a business whether it’s television, my job at the Radisson Admiral Hotel, or writing for the magazines; everything is a job, including my diet and my workout. I look at everything as a job and I time everything out. It’s like anything else, if you want it bad enough you learn to improvise and place it into your timeline. I want to write for a magazine, so I’ll write when I’m doing my workout in the morning, I’ll go on my iPad and start writing.

What time does your day start?
I wake up at 4 am, get to the gym at 5 am, get to work by 8:30 am or so, work until whenever, come home and do another cardio (session) usually. Then I sit down and look at the many other things I do which is mostly writing, and I’ll write until I go to bed at about midnight.

How did the 3D Chef happen for you? And where does it air?
Both of my shows air in the States right now. Body Fuel might come back to Canada on the Food Network. The 3D Chef came about when my friends, who do some filming, found out that I did a show and they asked me to do another show in high definition 3D, and that we would do the same healthy lifestyle concept and add a work out with it. They sold the show to 3 Net which is owned by James Cameron, Sony, IMAX, and Discovery, the first 3D channel in the States. We have been on there for the last year and it’s doing fairly well.

What is the most interesting thing no one knows about you?
I like long walks on the beach. No, no, no.. um I dunno. I know how to ballroom dance. I took ballroom when I was younger and I’m actually not a bad ballroom dancer.

What are your top 3 favorite restaurants in Mississauga?
Everyone who knows me knows I like good sushi. So I like Prince Sushi, and Iron Chef Japanese Steakhouse which is also very good, and I have to give some props up to Olaf Mertens at Ten Restaurant. I also don’t mind some fast food places as well. As much as I’m a health freak, I also do like a little bit of the grease.

If you could do it all over…would you be a chef?
I’d rather be a ruler of a small country, like Cuba (chuckle).

What’s next for Mississauga cuisine?
I think Mississauga has to look at two things. Maybe looking further into higher end food. I think we have a lot of medium range food, and I think there would be great opportunity for high-end places in Mississauga. And also offering healthier choices, not just salads and wraps.

Where would you take someone who has never eaten in Mississauga?
Fast food would have to be the Fire Pit or Shoeless Joe’s, and for Japanese, for sure it would have to be a toss off between Prince Sushi or Iron Chef Japanese Steakhouse. I would also include Ten Restaurant, and believe it or not, I like Canyon Creek for a good steak. It’s all up to the individual but I always try to show a variety of food.

Music or no music in the kitchen? Music.

What did you have for lunch today? Chicken and Asparagus.

What is your guilty pleasure? Master Steak or onion rings from the Fire Pit.

What’s your secret ingredient? Love. You like that one eh? That’s a good one, you have to admit. Love (laughter).

What would your last meal on Earth be? Foie gras on toast point with a jus of blueberry compote or a jus with some type of Late Harvest Vidal; something a little sweet with that foie gras on that crispy piece of bread. It’s making me cry right now.

What’s one thing people would be surprised to find in your fridge? Something sweet for my cravings.

What’s one food trend that needs to end? Cupcakes.

Do you have any tattoo’s? No.