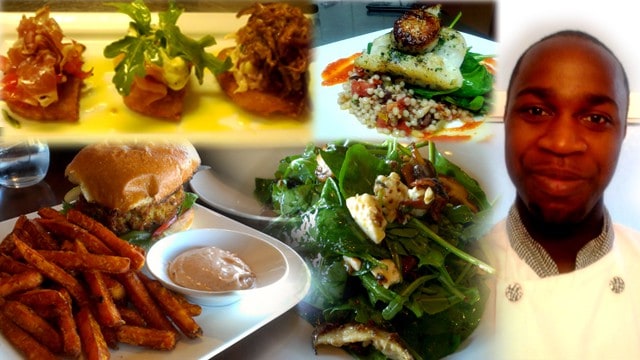 A true chef and artist will strive to develop their craft and skills by continuously learning. Chef Dialo Kinghorn took on every culinary opportunity presented to him, starting at a young age, to learn something new; especially when it came to food.

As the Executive Chef at Port 229 Artisan Bistro, he has a new role as both (one of) the proprietor(s) and culinary creator (as if being a chef isn’t enough).

He is driven by new experiences, but has learned and developed his craft from having held various positions, such as being a cook at the Brampton Golf Club and at The International Centre, to being the Executive Chef at Richtown Restaurant to Pantry Chef at Rogues Restaurant.

It wasn’t about a ‘title’ for Chef Kinghorn, it was about his yearning to cultivate his craft, and it was a conscious decision to accept a position with a lower title and work as a Pantry Chef at Rogues, where he knew he would gain a variety of skills. Skills that would help elevate his profile as a chef.

The opportunity to be part-owner in Port 229 was an offer he just could not refuse since the location in mind was in Port Credit, along the main strip on Lakeshore Rd. It is an area that Chef Kinghorn adores and is familiar with, being an ex-chef at Richtown Restaurant, which has since turned into Rude Native a few blocks away from Port 229. Having worked in Mississauga for the past 8 years, Chef Kinghorn made the move to the west side and now resides in Hazel’s town; a hop, skip and a jump away from the restaurant.

Jerk Chicken is where it all started. It was Chef Kinghorn’s first attempt at cooking something that was a combination of his mother and sister’s styles of cooking, in addition to his own take on food, which helped create his first dish. He states that “we don’t really (follow) a recipe per se, Caribbean people go by the look, feel and taste. We just go with the flow.” He feels that eyeballing ingredients is the best way to cook and adjusting the taste as needed.

It’s a refreshing change to see someone so fresh and creative in Mississauga’s food scene. His food speaks volumes.

Who inspires you professionally?
“Mario Batali and Gordon Ramsay. Jamie Oliver is also a good inspiration – (his style) is very raw and authentic. And I can’t forget our Canadian Chefs – Micheal Smith is really good as well, and Chuck Hughes is excellent”.

What type of cuisine do you feature here at Port229?
“It’s a really authentic place. We’re a bistro and artisans, so we make everything from scratch. We do our own stocks, our own soups and our own pastas. We are very authentic and we make everything from scratch. We are trying to do our own bread also too and we’re now going into our own desserts. Now we’re slowly getting into desserts, and the people love what we are making”.

What desserts have you started making in-house?
Chef Kinghorn provides a list of mostly classic dishes including a vanilla crème brulee, honey and lavender crème brulee, chocolate crème brulee, tiramisu, and apple tarte tatin. These desserts change every few days or so. Next week’s feature may be something like a red velvet cupcake or a New York-style cheesecake.

What is your main goal focus with the food you do here at port 229?
“Our main goal is to keep it fresh, simple, local and stuff that people like. And seasonal.”

How often does your menu change?
The menu is changed seasonally, about twice a year; a lot of which is based on his customers’ preferences. And if there is dish that his customers frequently order and really like, it will remain a staple on the menu. There are various weekly features which change approximately every 3 days, so it’s a great spot, whether to try something new or go for your classic Port 229 favourites.

Least favorite ingredient? None. As a chef we have to try everything. Ok, octopus.

Your go to meal? Pizza – I’m a pizza junk addict.

What do you do more often – cook at home or eat out? Eat out.

Who are you dying to cook for? Michelle Obama.

On your days off, are you more often on the go or in chill mode? Chill mode.