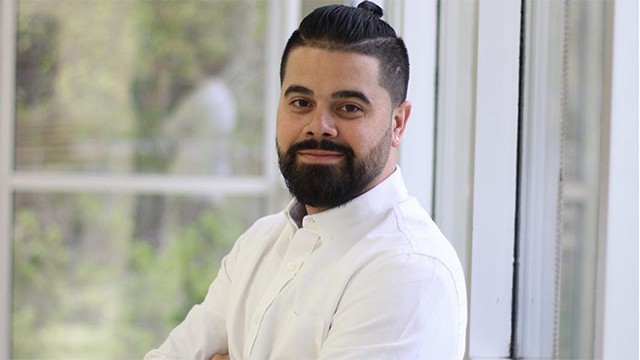 Joseph Khargie, a.k.a. DJ Director, has been DJing and running programs for youth in Brampton for almost a decade.

Joseph Khargie, a.k.a. DJ Director, has been DJing and running programs for youth in Brampton for almost a decade. The young, creative DJ has found a fun way to infuse numeracy into DJing, and spin it all into a program for youth across Brampton and Toronto!

So, youth in Brampton get to spin at events across the city, learn math, find a new passion, and jam out, all thanks to Khargie.

Who knew math and music had so much in common?

We sat down with Khargie to chat more about what he does in Brampton, music, DJing, and his super cool tattoos!

What do you do in the community?

I run a program called Math Thru Music. I’m the founder of Math Thru Music, and I’m also the executive director of a non-profit called Taho Foundation. So, Math Thru Music was something I created about two years ago, however, it was a DJ program originally. Math Thru Music is about engaging kids with numeracy. So we use the music, the beats, to show them that math matters and how to make it real. There are BPMs (Beats Per Minute) in every song that was ever created. Drake’s “One Dance” is like a 102, Justin Bieber’s “Sorry” is like a 100. Tory Lanez from Brampton, “Luv,” that’s like a 96. So all these numbers correlate with the beat and you can multiply them, you can divide them, you can manipulate them, which is adding and subtracting, you can just get really, really creative in remixing, and that’s how we do it.

Math Thru Music was a birthday present to myself. I finally incorporated it nationally this year in March, while Taho Foundation has existed for the last two years.

Can you talk a bit about Taho Foundation?

The goal of the foundation is to educate and to empower youth. So we have various programs – Math Thru Music is one of them, the CUTS program – which stands for Cutting U to Success – and that program teaches kids the trade of hairstyling. The other program is MONEY. That stands for Making Opportunities N Educating Youth. So in that program, we teach kids about entrepreneurship, stocks, real estate, business, we do a young Dragons Den where we actually give the kids money for the summer and based on their successful proposal or pitch, they do it.

The only stipulation is they have to give back the money, they get to keep the profit, the money is just to start them up and purchase things, but based off their proposal they’re supposed to show us how we’d get back our money.

Also, there’s Hurt No More, which is an empathy-based anti-bullying program and that teaches kids empathy.

Let’s talk about your DJing – where did your passion come from?

I’ve always loved music. Since I was young, going to sleep, I remember my dad always had a sound system where we lived, and I mean, when we first came to Canada, he was working as a security guard, making like, five dollars an hour, minding myself, my older sister, my grandma. My mom was still in Guyana, so this was like ‘91-’92, and he would still come home, even though he looked stressed, to take care of four people, including himself, and he would always play his music, music was like an escape, and that’s what i grew up thinking music is and was. I mean, it can make you feel great, it can make you feel sad, there’s a song for everything in the world, for every feeling in the world.

Where did the name DJ Director come from?

You know what, the friends who laughed at me in the beginning literally because I was program director at that time. I was always leading something, creating something. And they said you should be director – “direc-tah” – and they’re like it’s because you’re leading something all the time, youre always directing something. Director has always been in my title, but that’s why it stuck with me. And I like to say – I don’t always spend time on it – but I like to say “let’s make a movie, I’m director.” When we’re DJing, we’re engineering a rhythm, and you’re changing that rhythm, whether youre taking it down a notch or up a notch, you’re causing people to move and vibe. So you’re literally creating something out of nothing.

Where have you and the kids DJed recently?

Canada Day at Chinguacousy Park, we were the DJs by the food court. We did CeleBRAMPTON, we did the Toronto Police Caribbean Kickoff at their headquarters. We’ve done the Caribana Parade with the police on their float.

What’s your favourite place to DJ?

My family party is my favourite place to DJ, because I play whatever I want and my family loves it. As a DJ, you have to take a lot of requests and be fluent in customer service. I love it, but it’s very pressuring, and you’ll never be able to please everyone at one time. I’ll DJ the school dances with the kids, I’ll DJ their proms, their semi formals, their athletic banquets, I DJed at the Pearson Airport Street Festival, they’re also having a marathon run, I think it’s a 10K or a 5K on the runway, in September and I’m DJing that.

Is there a time when you really felt like you were having an impact?

I did this thing with DJ Depot – a Brampton retail store for DJing – and I said listen, would you guys open up your shop on every third Thursday for Turntablism Thursdays? Can we teach these kids a fun way to scratch and learn the art more? So, one kid posted, he was in grade eight and now he’s going to grade nine, I only met him in March this year, and he just posted last night. He’s like, thank you Math Thru Music, and thank you DJ Depot for sticking with me and allowing me to explore my talent in DJing – I couldn’t do it without you guys.

So whether it be a small post like this, or a mother literally telling me last year at one of my major events after it happened, she grabs me, turns me around, and says you saved my son. He had a drug addiction, she says you distracted him, positively, and it’s like – I had no idea.

What’s next for Math Thru Music?

We’re taking it to America! We’re starting in Chicago, starting in their school board. We already have a verbal agreement with the school board, and we will be running the program via – well, I’ll be there for a bit in the beginning to assist – it’s going to be run online.

What’s your favourite genre of music?

I like old school reggae, like oldies reggae, not dancehall. Bob Marley’s “Waiting in Vain” is my favourite song, that nice, vibing out sound, like you’d play it on a Sunday evening.

How many tattoos do you have?

I have over 300 stars on my right arm, they have no meaning other than that I just like stars. And then I have about 21 tattoos that all mean something. Like, I have “resilience” written on my foot with a phoenix, because resilience means to bounce back, and the phoenix is an 1800-year-old mythical bird, and when you think it’s dying, it’s actually just recreating itself, so it never dies. So the phoenix is attached to that resilience, and it’s on my foot because I bounce back.

What do you think of Brampton?