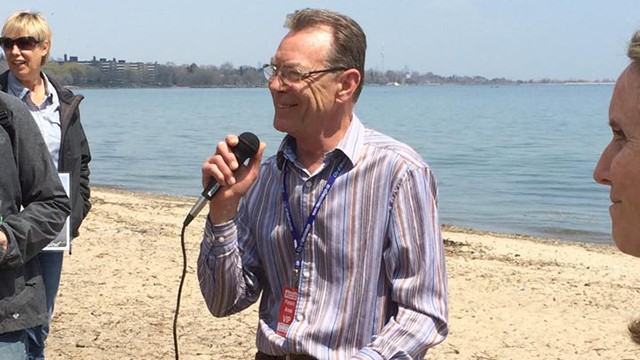 Jim Tovey, the late city councillor who might have been best known for his ambitious Port Credit and Lakeview revitalization dreams (both of which will forever change the city’s vast waterfront area), was also known for being a talented musician.

For that reason, it’s fitting that Tovey, who was recently honoured through the naming of a new conservation area, is about to get a decidedly musical posthumous honour.

The committee who runs the Mississauga Music Walk of Fame, located in Port Credit Memorial Park, recently invited residents to attend its upcoming induction ceremony–a ceremony that will honour the late councillor.

“This year the committee will solely be inducting the late Councillor Jim Tovey to honour him as founder, inspiration and artist,” the letter reads.

Tovey, who was born and raised in Victory Village in Mississauga and who was known for being a passionate advocate of the Lakeview community, died suddenly in January 2018. He was 68.

According to the organization’s website, the Mississauga’s Music Walk of Fame was established in 2012 by Tovey himself.

The ceremony recognizes the city’s prominent musicians, and past inductees include Fito Blanko, Jeff Healey, Billy Talent and Rik Emmett.

Each year, four inductees have their names engraved on granite plaques that are installed in the park’s walking path.

This year, only Tovey will be inducted.