If You Do This, No One Will Buy Your House in Mississauga

While the housing market has come back into balance following a wild few months in 2017, the fact remains that houses are still expensive (even condos can cost close to half a million) and sellers have a bit of an advantage over buyers.

But while the market is slightly more challenging for buyers, there are certain houses that are significantly less likely to sell—even if they're otherwise clean, modern and in decent shape.

Toronto-based real estate website Zoocasa recently conducted a national study (Zoocasa’s 2018 Housing Trends Report) to determine Canadians’ sentiments regarding cannabis legalization (among other key housing issues) and the impact it may have on property values.

Naturally, overall sentiment differs by province and age group, but the main takeaway is that people are generally not interested in purchasing a house where cannabis plants were grown.

Cannabis was officially legalized in Canada on Oct. 17.

Under the Cannabis Act (Bill C-45), Canadians can consume cannabis, as well as grow up to four plants, in their private residences.

But whether people will want to buy a house that cultivated plants is another matter entirely. 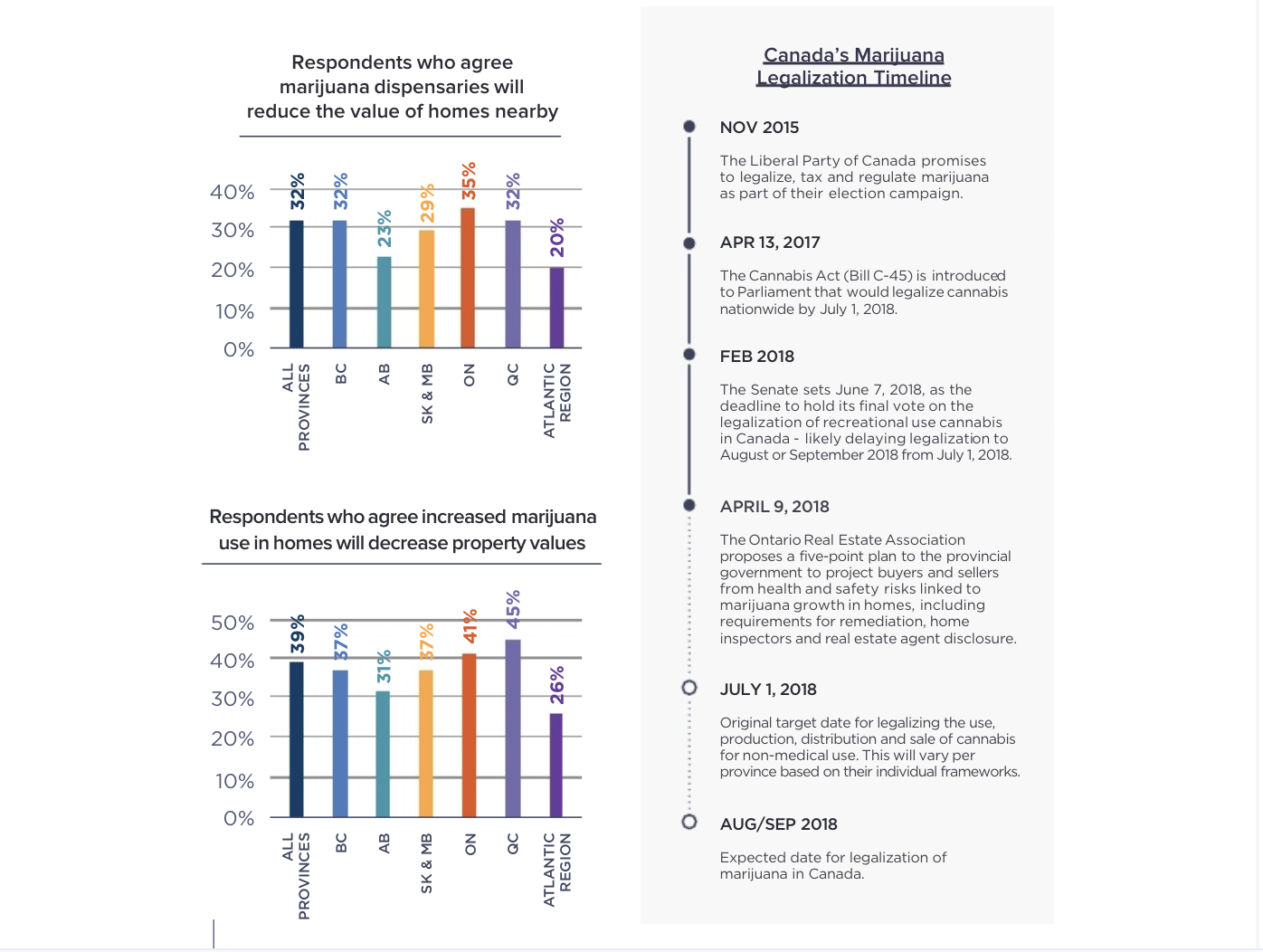 Zoocasa says 47 per cent of respondents from all provinces say even a legal amount of cannabis grown in a home would reduce their desire to buy the property. As far province breakdown goes, 52 per cent of Quebec residents surveyed agreed, as did 48 per cent of both Ontario and BC residents. In Atlantic Canada, only 31 per cent agreed.

Zoocasa also found that 32 per cent of respondents from all provinces surveyed agree that having cannabis dispensaries will reduce the value of homes nearby. Since the federal government has identified Brampton and Mississauga as approved candidates for CCBO stores, this might concern some local homeowners.

Only 23 per cent of Alberta residents agreed, while Ontario had the highest percentage at 35 per cent.

Younger people are a little more relaxed—and would be willing to grow a legal plant (or two!).

Zoocasa says 19 per cent of respondents from the millennial generation (22-37 years old) indicated that they would consider growing a legal amount of cannabis on their property, nearly twice as many as the boomer generation (54-72 years old) at 11 per cent.

Zoocasa says the results of this report are based on an online survey conducted by company in March 2018. The survey had a sample size of 1,431 respondents who live in Canada. The estimated margin of error is +/- 2.6 percentage points, 19 times out of 20.

Would you purchase a house that was once home to a few cannabis plants?

Coming soon: A new ice cream parlour is opening soon in East Hamilton
Just when you thought Ottawa Street couldn’t get any cooler, this new business will soon be serving up some of the coolest treats in the neighbourhood.
END_OF_DOCUMENT_TOKEN_TO_BE_REPLACED