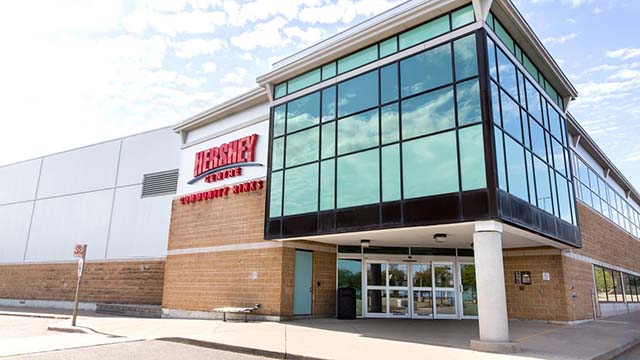 First it was the Skydome, and now it’s a sporting complex in our neck of the woods.

A name change is coming, and it’s coming this summer.

The City of Mississauga recently announced its most iconic sports complex, currently called the Hershey Centre, will soon bear a new name and logo.

And it will honour a very well-known (and very homegrown) restaurant franchise.

The multi-purpose sports arena and entertainment venue will undergo a name change just shy of its 20th anniversary, as Hershey Canada Inc. decided not to renew the naming rights agreement set to expire on June 30, 2018.

“The city has a great long-standing business relationship with Hershey Canada. We understood that this was a difficult business decision for the company,” said Shari Lichterman, director, recreation. “We’d like to thank Hershey Canada for their partnership over the last two decades and wish them well with their future ventures.”

The city says Hershey Canada’s decision not to renew prompted the city to look for a new sponsor late last year.

“We’re excited to be working with Paramount on this agreement. With final approval from council, we look forward to fostering this partnership and the opportunities it will bring to the city,” Lichterman added. “As we approach the July 1 transition date, we will begin to update signage, websites and other facility assets to help local sports clubs, residents and fans around the city adjust to a new name.”

As part of the signed agreement, Paramount will be given the naming and signage rights to the sports complex, which includes the sports arena and entertainment venue, the community rinks, the Mississauga SportZone and outdoor sports fields.

Through the sponsorship agreement, Paramount will also provide food services to the entire facility, including all concessions and events.

The city will continue to use the Hershey name until June 30, 2018.