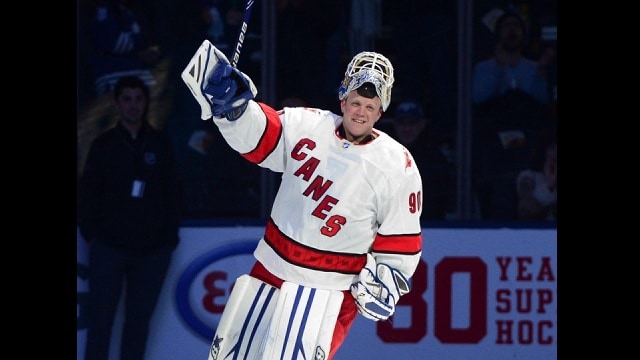 Ayres, a 42-year-old Zamboni driver, was forced to be Carolina’s emergency goalie for its road game Saturday night against the Toronto Maple Leafs. Ayers, of Whitby, Ont., stopped eight of 10 shots he faced in his NHL debut, helping the Hurricanes capture a 6-3 victory.

Afterward, he was named the game’s first star. Ayres came into the game in the second period after injuries to regular netminders James Reimer and Petr Mrazek.

On Sunday, the Hurricanes announced Ayres will attend their home game Tuesday night against the Dallas Stars.

“See you Tuesday, Davey!” the club said on its Twitter account. “Ayres will be in the building on Tuesday and will be our @VectorSecurity Siren Sounder!”

For Ayres, it’s another opportunity for him to hang out with his new teammates.

“They’re flying me down to Carolina for their game on Tuesday so I’ll get to spend more time with the guys, which is good,” he told reporters in Toronto on Sunday at the Leafs’ practice facility. “They’re a great team, great organization.”

It was also announced that Ayres will be making rounds on American talk shows on Monday as well, including The Today Show on NBC, Fox and Friends and CNN World Sport.

After the win over Toronto, the Hurricanes posted a video of Ayres being showered by Carolina players with water when he came into the team’s locker room. Head coach Rod Brind’Amour praised both Ayres and his team for their efforts.

“It’s not often in a game that you get tied to a great memory,” he said. “All you have is the memories you’ve got and you guys just gave me one, you gave each other one.

“But it’s a memory I’m going to have forever, the way you guys played in that third period for you (pointing to Ayres) and the way you (Ayres) played for us.”

What’s more, the stick Ayres used in the game is going to the Hockey Hall of Fame.

The Hurricanes started selling shirts with Ayres’ name and No. 90 after the game. The team says Ayres will get royalties and a portion of the proceeds will go to a kidney foundation in honour of the goaltender, who underwent a kidney transplant in 2004.

Predictably, Ayres was inundated with congratulations and well wishes for his accomplishment following the game. And the high of the incident resulted in precious little sleep that night.

“I got off the ice (Saturday) and I think I had 160 text messages,” said Ayres, who has worked as a Zamboni driver for the American Hockey League’s Toronto Marlies and also has served as a goalie in workouts and practices for the Leafs and Marlies. “My phone was blowing up and hasn’t stopped.

“(Carolina GM Don Waddell) texted me (Sunday) morning just to say congratulations, which was awesome. I got a text from former Marlies coach Dallas Eakins. I spoke to Sheldon (Toronto head coach Sheldon Keefe) . . . obviously it was a tough loss for them but he was happy for me as well. It’s been great.”

Ayres admitted he was surprised to have received the game’s first star.

“I got off the ice and I was going back to the change room and the guy stopped me and said, ‘You’re going nowhere. You’re going back on the ice.’ ” Ayres said. “I thought I was getting the third star.

“It (first star) was really cool. I was surprised how many people stuck around in the arena afterwards. The ovation I got from the Toronto fans, even though I wasn’t on the Toronto team was fantastic.”

Ayres said Reimer, a former Leaf goalie, was very supportive of him during and after the game.

“Reimer actually sat with me in the second intermission,” Ayres said. “He said, ‘Have fun, this is your time. This isn’t your full-time job but you’re out here, you know what you’re doing. Just be a goalie and make saves.’

“I settled down in the third period and he came in after and he was pretty pumped up.”

Ayres admitted he was surprised to have not faced more shots from the Leafs but credited the Hurricanes for that.

“You figure they (Leafs) would’ve been shooting from everywhere,” he said. “But Carolina did a great job of blocking everything and keeping everything to the outside.

“They didn’t really give them much of a chance to shoot from everywhere, really.”

This report by The Canadian Press was first published Feb. 23, 2020.