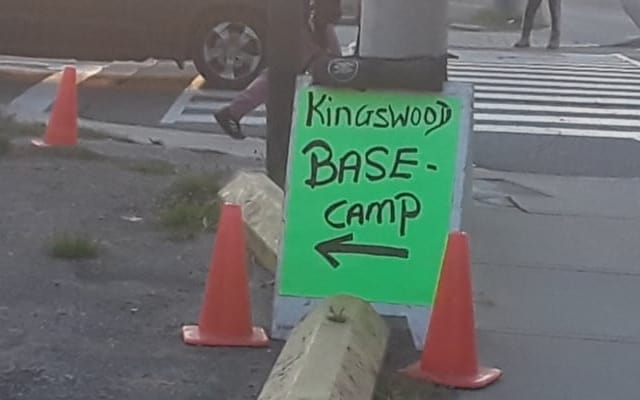 You could not swing a boom mic in downtown Hamilton last weekend without hitting a production truck.

At least three significant productions were filming in the city in recent days. Perhaps the most notable is the Apple TV+ miniseries “Five Days At Memorial,” which is based on a bestselling nonfiction book of the same name that chronicled the life-and-death decisions doctors in a flooded New Orleans hospital made when Hurricane Katrina devastated the coastal city in August 2005.

Last weekend, the “Five Days at Memorial” crew used the Art Gallery of Hamilton on King Street West to stand in for the storm-ravaged hospital.

The miniseries stars one-time Academy Award nominee Vera Farmiga (“Up In The Air”), Adepero Oduye (“12 Years A Slave”) and Cornelius Smith Jr. (“Scandal”). Written and directed by Carlton Cuse and John Ridley, it is also shooting in Toronto and New Orleans and production is expected to go through November.

@WhatsFilmingON something called Kingswood is filming in Hamilton at Bay and King pic.twitter.com/hLyh6ZSycj

@WhatsFilmingON They've been filming some sort of flooded hospital scene at the convention centre in downtown Hamilton. pic.twitter.com/fAusDjTW4k

The series is shooting its third season. The second debuts on Netflix in October.

Lastly, but not leastly, veteran actor Dylan Sprouse has been sighted in the city while shooting “My Fake Boyfriend.” The romantic comedy is a collaboration of Lionsgate Films and Buzzfeed and the plot involves a young man, portrayed by Keiynan Lonsdale, who creates a fake boyfriend in order to keep his ex-lover out of his life. The cast also includes “Modern Family” alumna Sarah Hyland. Reports have said the feature film will likely be distributed digitally

It was so nice meeting you @dylansprouse #Hamilton #movie #HamOnt pic.twitter.com/8zsfdploBO